Klinefelter Syndrome: A 10-Year-Old With Developmental Delay and Academic Difficulties

At a routine health supervision visit, an 11-year-old boy presented with concerns about poor school performance, difficulty gaining weight over the past year, and persistent speech problems. During the visit, his mother expressed concern about his inability to focus while completing his homework and was worried he might have attention-deficit/hyperactivity disorder (ADHD). Other reported problematic behaviors included inattention, a refusal to follow directions, “yelling out,” a lack of self-control, and impulsivity.

The boy had no history of self-harming behaviors or aggression toward others. His past medical history included allergic rhinitis, occasional epistaxis, and intermittent constipation. There is a family history of neurofibromatosis type 1, which recently had been diagnosed in his younger sister, but no other family history of cognitive or genetic conditions.

Pertinent physical examination findings included a blood pressure of 113/75 mm Hg, a heart rate of 72 beats/min, height of 162.6 cm (> 99%), and weight of 34.0 kg (50%) (Figure). The boy appeared tall and thin and maintained poor eye contact during questioning and physical examination. His movements were clumsy during the encounter, but he responded well to direction. During questioning and conversation, he demonstrated obvious delays in expressive and receptive language skills. 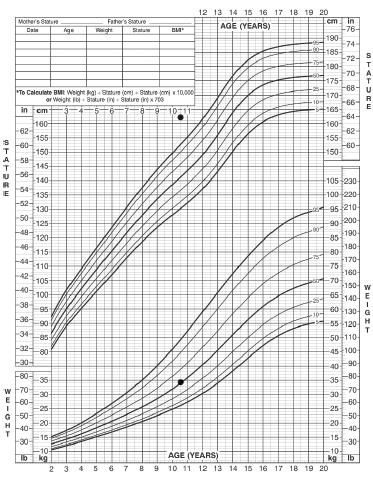 Genital examination revealed Tanner stage 1 male genitalia with a circumcised penis and prepubertal (2 mL) testicles bilaterally. His testes were normal in texture with no abnormalities. He had no gynecomastia, and his hip size appeared normal for his age. He did not have any café au lait spots or axillary freckling. The rest of the physical examination findings were unremarkable.

The boy’s developmental delays, the concern about cognitive impairment, and his prepubertal testicular volume despite his tall stature prompted a formal evaluation for underlying endocrinologic, metabolic, and genetic causes. Results of the laboratory evaluation, which included a complete blood count, an electrolyte panel, a prealbumin test, thyroid function tests, and urinalysis, were unremarkable. However, DNA microarray analysis results revealed the presence of 47 chromosomes, with two X chromosomes and one Y chromosome (47,XXY), and he subsequently received a diagnosis of Klinefelter syndrome (KS).

Having received a formal diagnosis of KS, the boy was referred to specialists in endocrinology and genetics for further evaluation and management.

At his initial endocrinology evaluation, he was found to have prepubertal gonadotropin levels with no evidence of testicular failure (luteinizing hormone, 0.21 mIU/mL; follicle-stimulating hormone, < 0.05 mIU/mL). His testicular size of 2 mL bilaterally was normal for a prepubertal boy but was not consistent with his recent increase in growth velocity suggestive of a pubertal growth spurt. Without evidence of gonadal failure, testosterone therapy was not recommended during the initial endocrinologic evaluation. Return visits were scheduled at 6-month intervals to follow his pubertal progression and to monitor for hypergonadotropic hypogonadism, a common complication of KS.

Because of the boy’s significant speech and language delays, his poor handwriting, and other fine-motor concerns, he was referred for speech and occupational therapy. His parents’ and teachers’ concerns about the boy’s inattention and impulsivity prompted an evaluation for ADHD with formal, validated screening tests (ie, Conners Comprehensive Behavior Rating Scales) given to his teachers and his parents.

His symptoms of impulsivity and inattention initially were managed with behavioral modifications and redirection at home and school. Due to his low body mass index, he was started on nutritional supplementation with high-calorie fortified drinks 2 to 3 times daily.

The suspected diagnosis of KS is based on clinical findings and is confirmed with cytogenetic evaluation. Other indications for obtaining DNA microarray laboratory analysis include evaluating a child with multiple congenital anomalies, the presence of dysmorphic features, and/or a concern for the presence of autism.

In our patient, the clinical clues to the diagnosis of KS were behavioral concerns, developmental delays, and the lack of puberty initiation despite increased height velocity and tall stature. Since no classic phenotype exists during childhood, KS can be difficult to diagnose before the onset of puberty. Most children with KS present with developmental problems—some significant enough to be classified as mental retardation—but almost all children with KS will have some level of decreased school performance.1

The spectrum of developmental problems includes learning disabilities, the inability to perform executive functions such as problem-solving and planning, verbal cognitive defects, and deficits in reading, spelling and mathematics.1 KS patients have a wide range of IQs, from well below average to well above average.1 Affected boys also tend to be shy and anxious, lack maturity, and have difficulties with social interactions. Problems mainly are recognized as boys with KS progress through elementary school, and by late adolescence, they have generalized learning disabilities and often are performing poorly in school.2 Conflicting data exists about an association between KS and criminal behavior. The most recent data support an association with an increased incidence of psychosocial problems and aggression.2,3

Psychiatric symptoms are a common comorbidity in patients with KS. Psychiatric symptoms can include hallucinations, mood and anxiety problems, hyperactivity, impulsivity, and autistic behaviors.3 These symptoms often overlap with other potential diagnoses, which can delay detection of KS until the child reaches puberty.

As with our patient, children with KS also may have poor emotional control (eg, yelling out) and impulsivity. Children with KS also can have other genomic rearrangements that are independently associated with seizures, autism, and schizophrenic symptoms.3 The medical management of children with psychiatric symptoms can be challenging due to the incidence of medication adverse effects and the time investment required of the patient and parents for the recommended multimodal therapy.3

Hypogonadism and infertility in KS result from testicular hyalinization of seminiferous tubules with a loss of germ cells and Leydig cell hyperplasia.4 With the onset of puberty in patients with KS, initial testicular growth occurs to approximately 4 mL in volume but is followed by shrinkage to less than 4 mL.4 Although patients with KS most commonly have low testosterone, levels can be within the normal range with elevated gonadotropin levels.4 Fertility in these patients has been demonstrated via intracytoplasmic sperm injections with in vitro fertilization, but due to concerns about chromosomal aberrations, patients benefit from genetic counseling.5 Other genitourinary associations include hypospadias, small phallus, and cryptorchidism.1 KS patients also have lower bone mineral density compared with age-matched healthy subjects corrected to weight, height, and body mass index, but frank osteoporosis is not common.6 Hypogonadism is associated with increased truncal fat and decreased muscle mass.

Associations with metabolic syndrome and type 2 diabetes have been well described.7 These associations lead to increased risk of mortality from cardiovascular disease, although for unclear reasons the mortality risk of mortality from ischemic heart disease is reduced among persons with KS. Gynecomastia frequently is seen with KS and is a risk factor for the development of breast cancer, with an incidence of 0.1% in this population.8 An increased risk of mediastinal germ-cell tumors and non-Hodgkin lymphoma also is increased.8 Treatment for hypogonadism is testosterone therapy at physiologic doses when evidence of testicular failure occurs.1,4

This case study reinforces the importance of genetic testing in children with a complex presentation of behavioral, growth, and/or psychiatric symptoms to rule out chromosomal or syndromic diagnoses. Earlier detection can enable earlier intervention for deficits in motor skills, verbal skills, and social skills, and ultimately may improve academic functioning and prevent disruptive behaviors.

Management of patients with KS is a multidisciplinary process, and the establishment of a medical home is essential.9 Treatment should include a multispecialty partnership that usually involves a pediatrician, an endocrinologist, a geneticist, a speech therapist, and other professionals as needed, such as psychologists, psychiatrists, and developmental specialists. It also is important to establish partnerships within the school system to ensure the child with KS has a maximized learning environment.9 Management also depends on age-specific challenges and problems.

Testosterone replacement is a lifelong therapy to prevent the complications associated with decreased testosterone levels, including metabolic syndrome and type 2 diabetes.1,4 The current recommendation is to administer testosterone for patients with diagnosed hypogonadism to prevent adverse effects on body composition and metabolic functions and to promote general well-being.2 Patients also should be counseled about making lifestyle changes, supplementing the diet with calcium and vitamin D, and having dual-energy X-ray absorptiometry scans every 2 to 3 years, as well as be counseled about fertility issues, the increased risk of breast cancer, and getting involved with KS support groups.9

Sadiq S. Shaik, MD, is an anesthesia resident at the University of Florida College of Medicine in Gainesville, Florida.

Maria N. Kelly, MD, is an associate professor in the Department of Pediatrics at the University of Florida College of Medicine in Gainesville, Florida.

Henry Rohrs, MD, is an assistant professor in the Department of Pediatrics at the University of Florida College of Medicine in Gainesville, Florida.

Stephanie Ryan, MD, is an assistant professor in the Department of Pediatrics at the University of Florida College of Medicine in Gainesville, Florida.

7. Bojesen A, Kristensen K, Birkebaek NH, et al. The metabolic syndrome is frequent in Klinefelter’s syndrome and is associated with abdominal obesity and hypogonadism. Diabetes Care. 2006;29(7):1591-1598.