This 40-year-old black woman first saw a tiny papule on her left maxilla 2 months before being seen in dermatology, a visit prompted by the lesion’s rapid growth. The lesion had caused no symptoms, and there had been no antecedent trauma to the area. The patient reported being otherwise healthy, and she said she had never had much sun exposure. Her only medication was for blood pressure. 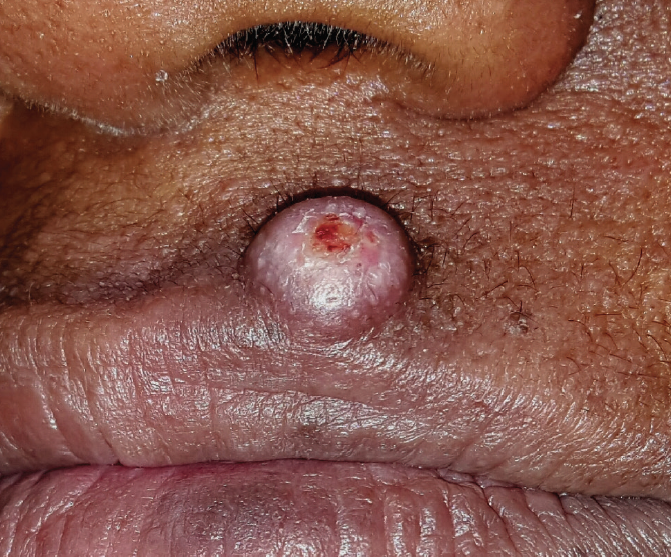 Physical examination. The lesion was an impressive dome-shaped, 1.0-cm, firm, white nodule with a central keratotic core, attached at its base by a 6-mm pedicle. The patient’s skin was type V on the Fitzpatrick scale, with classic African American features.

Discussion. Keratoacanthomas (KAs) are quite common but are almost always found on sun-damaged skin of older, fair-skinned patients. The arms, hands, ears, face, and neck are common locations. They appear to derive from the neck of a hair follicle and are thought to be triggered by excessive exposure. Histologically, they closely resemble a well-differentiated squamous cell carcinoma, but the domelike symmetric shape with the central keratotic core is the architectural feature that helps to establish the exact nature of the lesion.

Among the potential triggers for KAs is human papillomavirus infection. Left alone, most KAs will grow, sometimes to an alarming size, then stabilize, then slowly regress, leaving only a scar behind. From 5% to 7% of KAs will transition into less–well-differentiated squamous cell carcinomas with the potential to metastasize. For this reason, most experts advise complete removal such as with excision rather than with deep shave.

In this author’s experience, it is quite unusual to see a KA on a person with such dark skin.