Kawasaki Disease in a Young Boy With a Neck Mass 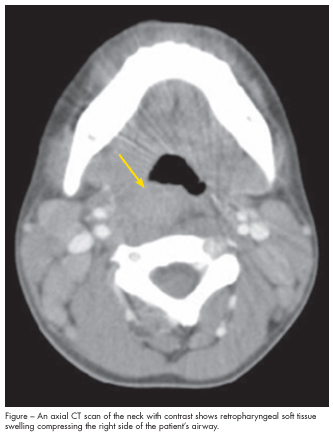 A 4-year-old Latino boy with mosaic Turner syndrome (45,XY/45,XO) presented with fever, temperature up to 40.5ºC (105ºF), of 3 days’ duration. He also had swelling on the right side of the neck and difficulty in swallowing. His history was significant for recurrent otitis media.

On examination, the child’s temperature was 38.9ºC (102ºF); heart rate, 152 beats per minute; and respiration rate, 24 breaths per minute. He had nonerythematous fullness of 3 3 3.5 cm on the right side of the anterior neck, along with posterior cervical lymphadenopathy. One of the lymph nodes was fluctuant. There were no tonsillar exudates, changes of the oral mucosa, rash, or conjunctival injection.

The patient was treated empirically with intravenous nafcillin and clindamycin; however, he continued to have high fevers, with temperatures up to 40.3ºC (104ºF). On hospital day 4, the antibiotics were switched to ampicillin/sulbactam and vancomycin because of concern for resistant pneumococci and methicillin-resistant Staphylococcus aureus. The next day, a CT scan of the neck revealed midline and right-sided retropharyngeal soft tissue swelling from the skull base through C6, with a prevertebral phlegmon at C4 (Figure). Bilateral internal jugular chain and posterior triangle adenopathy was also noted, with the largest lymph node measuring 18 mm. No circumscribed abscess was seen. A second CT scan obtained 4 days later showed partial resolution of the prevertebral phlegmon and no abscess. An MRI scan of the head and neck confirmed these findings.

After 10 days of unremitting fever, incomplete Kawasaki disease was suspected and intravenous immunoglobulin (IVIG) was started. An echocardiogram demonstrated mildly dilated coronary arteries without evidence of aneurysm formation. After 2 weeks in the hospital, the child’s fevers had subsided, the C-reactive protein level had decreased to 2.1 mg/dL, and he was discharged. Outpatient treatment consisted of high-dose aspirin and amoxicillin/clavulanate for lymphadenitis.

At follow-up 1 week after discharge, the patient was afebrile, and the cervical fullness and lymphadenopathy had resolved. However, he had mild desquamation in the groin, perineum, and fingers, which further supported the diagnosis of incomplete Kawasaki disease (KD).

KAWASAKI DISEASE:
AN OVERVIEW
KD, or mucocutaneous lymph node syndrome, is an acute self-limiting vasculitis of childhood that affects the small- and medium-sized arteries1; it is currently the leading cause of acquired cardiac disease in children. Because KD can pre-sent with an atypical set of symptoms, it is important to consider the diagnosis in patients with persistent fever.

Although this multisystem disease has no known cause, KD is generally thought to have an infectious origin. Like most other diseases with infectious etiologies, KD appears in epidemics, with seasonal and geographic clustering. It has been associated with toxin-secreting S aureus and other superantigen-producing bacteria2,3 as well as multiple viruses, including a novel human coronavirus.4

The wide range of clinical presentations associated with KD can often delay the diagnosis. The average time from initial symptom to diagnosis of KD in patients with presentations similar to this patient (with fever and one other predominating symptom) is 6.6 days.5 KD commonly presents as an acute febrile illness with inflammation and an array of head and neck manifestations, including cervical lymphadenopathy, pharyngitis, conjunctival hyperemia, and stomatitis. Diagnosis of Kawasaki disease relies on clinical findings, which include the presence of fever of at least 5 days in combination with 4 of 5 criteria (Table 1). Although adenopathy is the least common of the clinical criteria for KD, occurring in only 50% to 75% of cases,6 when it is present, it may precede the skin and mucous membrane manifestations by up to 5 days.7 This can lead to an initial misdiagnosis of adenitis. Inflammation in KD can involve the peritonsillar and parapharyngeal areas as well as the retropharyngeal space, as in this case.

KAWASAKI DISEASE
WITH RETROPHARYNGEAL PATHOLOGY
In a review of the literature, we found 70 cases of KD with retropharyngeal pathology resembling an abscess, including this case.5,8-21 In the majority of cases, patients eventually received a diagnosis of incomplete KD (fever with only 2 or 3 of 5 clinical criteria). Of the 70 patients, about three-quarters were boys, which suggests a male predominance. Age at presentation ranged from 16 months to 9 years.5,8-21 Average time from onset of symptoms to diagnosis of KD was 9 days (range, 6 to 21 days).

Atypical presentations not only are difficult to accurately diagnosis but also are associated with an increased risk of coronary artery abnormalities.22 Patients with retropharyngeal pathology are almost always treated with antibiotics for a presumed infectious process. When the typical polymorphous rash of KD appears, a possible allergic reaction is considered and the antibiotic is switched to another agent. KD in its early stages is most commonly misdiagnosed as cervical lymphadenitis and deep neck infection (Table 2).

It is generally believed that the soft-tissue swelling in the prevertebral space can be explained by enlargement of the lymph nodes in the area.9 CT often does not allow clear differentiation of adenitis from a retropharyngeal abscess. It is unknown how frequently KD involves the retropharynx because neck imaging is not routinely performed in these patients. When a patient presents with a retropharyngeal or parapharyngeal process that does not immediately require surgical intervention, administration of antibiotic therapy with close observation and serial physical examinations is warranted to avoid unnecessary
attempts at surgical drainage.

MANAGEMENT OF KAWASAKI DISEASE
Treatment of KD focuses on decreasing vascular inflammation. High-dose (2 g/kg) intravenous immunoglobulin (IVIG) given within 10 days of disease onset has been shown to reduce the incidence of coronary artery aneurysms from 17% to 4%.23 Thus, it is important to keep KD in the differential diagnosis of any child with fever, a neck mass, and tender cervical adenopathy that is unresponsive to antibiotic treatment and to begin treatment with IVIG early to prevent coronary artery-related complications. High-dose aspirin, 80 to 100 mg/kg/d given in 4 divided doses, has been found to potentiate the action of IVIG and is frequently used as an adjunct in the acute phase of the disease. Corticosteroids, anti–tumor necrosis factor-α, cyclophosphamide, and plasmapheresis have been tried in patients whose disease process is resistant to treatment; however, there is no evidence to support their use.19 ■