The patient had had no fever, vomiting, dizziness, or headache. Her pediatrician had seen her the day before presentation to the ED and had prescribed trimethoprim-sulfamethoxazole, of which she had taken one dose.

Results of a technetium-99m pertechnetate scan were negative for a Meckel diverticulum. A colonoscopy was then performed and revealed 6 polyps ranging in size from less than 1 cm to approximately 3 cm in diameter. They were located in the ascending, transverse, descending, and proximal colon. All polyps were removed via polypectomy, and pathology results were consistent with juvenile retention polyps. The patient remained clinically stable throughout her hospitalization. She continued on iron supplementation therapy and was discharged home after 5 days.

Colonic polyps are common in children and most frequently present with painless rectal bleeding. They also may present with a prolapsing rectal mass or mucopurulent stools, the latter of which were experienced by our patient. Approximately 75% to 90% of childhood polyps are classified as juvenile polyps. They also are known as inflammatory polyps, retention polyps, and hamartomatous polyps depending on their predominant histology, which features distinctive cystic architecture, mucus-filled glands, and infiltration by inflammatory cells. The term juvenile refers to the polyp’s type, not the age of onset.

Juvenile polyps most frequently are diagnosed before the age of 10 years, with the peak age of diagnosis between 2 and 5 years of age.1 Their etiology remains unknown; one hypothesis is that these polyps are a form of allergic inflammation of the colonic mucosa.2 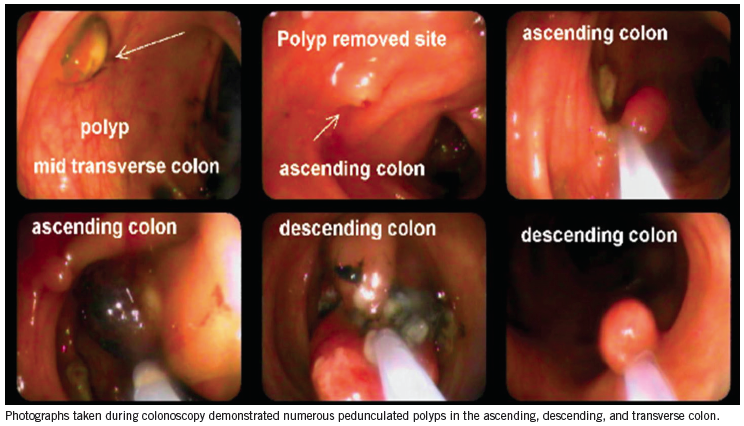 The differential diagnosis for rectal bleeding is quite broad (Table).4,5 Our case highlights a common presentation of juvenile polyps and a stepwise approach to the correct diagnosis.