University of Alabama at Birmingham

A 3-day-old girl underwent a routine screening complete blood count, the results of which were significant for thrombocytopenia as evidenced by a platelet count of 29 × 103/µL. She had been born at 40 weeks of gestation via spontaneous vaginal delivery to a 24-year-old mother who had no significant medical history. There were no complications during gestation or labor.

At a follow-up visit with her pediatrician, she had normal physical examination findings, but her laboratory test results were significant for thrombocytopenia, neutropenia, monocytosis (absolute monocyte count [AMC], 5,100/µL), and the presence of immature monocytes and nucleated red blood cells on peripheral blood smear (Figure). 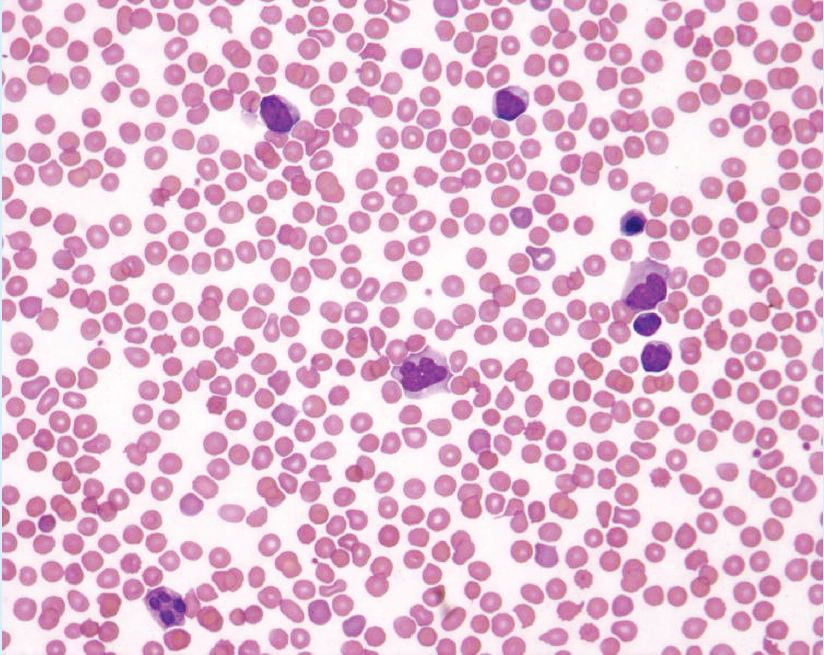 Evaluation at a close follow-up visit showed an increase in the newborn’s white blood cell (WBC) count, from an initial value of 15,900/µL to 33,000/µL, and a new onset of hepatosplenomegaly, which prompted admission for management and further diagnostic testing.

Bone marrow aspiration and biopsy were performed by the pediatric hematology and oncology service, and the results demonstrated 15% blasts with a monocytic appearance. Genetic testing revealed a mutation in the KRAS gene, which is consistent with the diagnosis of juvenile myelomonocytic leukemia (JMML).

JMML is a rare form of leukemia, with a reported annual incidence between 0.6 and 3 infants per million.1,2 The clinical presentation of this disease includes fever, hepatosplenomegaly, and lymphadenopathy.3 While approximately 40% of JMML cases occur before the first year of life,4-7 our case was unusual in that our patient presented very early in the neonatal period.

Pediatricians and neonatal intensivists are familiar with the infectious and alloimmune causes of neonatal thrombocytopenia, but this case illustrates that JMML ought to be considered as a very rare cause of neonatal thrombocytopenia. A key finding in this case was the persistent elevation in the AMC, as well as the presence of immature monocytes in the peripheral blood smear. The patient’s initial WBC count of 15,900/µL is normal in the context of a stress response from a vaginal delivery8; however, she also had a significantly elevated AMC. These findings were consistent with elements of JMML diagnostic criteria, including an AMC greater than 1,000/µL and a WBC count greater than 10,000/µL.4

While our patient was female, a male predominance in JMML has been identified.4,9 Male infants with JMML initially may be incorrectly diagnosed with Wiskott-Aldrich syndrome, since the two diseases share commonalities. Our patient presented with atypical features of JMML, most notably a lack of hepatic or splenic enlargement at the first documentation of blood count abnormalities. This case highlights the importance of vigilance in the clinical follow-up of laboratory test result abnormalities in the neonatal period. What initially had been thought to be a case of routine neonatal thrombocytopenia was found to be a rare and severe form of leukemia.

The best curative therapy for JMML is hematopoietic stem cell transplant (HSCT). The rate of relapse following HSCT remains high at 35%, and the 5-year event-free survival is approximately 50%.10 No consensus exists on poor prognostic features in JMML, but some studies have suggested that older age (greater than 2 years), female gender, mutation of the PTPN11 gene, monosomy 7, high percentage of fetal hemoglobin (greater than 10%), and a low platelet count (less than 33 × 103/µL) may lead to a worse outcome.4,5,11 Survival in JMML also is affected by pre- and post-transplant complications, including infections and organ dysfunction.

Our patient developed worsening hepatosplenomegaly with respiratory distress and difficulty feeding. While awaiting stem cell transplant, she required treatment with 6-mercaptopurine and isotretinoin followed by cytarabine. Although she showed a response to cytarabine treatment, she subsequently developed a respiratory syncytial virus (RSV) infection. She later died of respiratory failure related to an anaphylactic reaction to platelet transfusion in combination with her compromised respiratory status due to her viral infection and organomegaly.

All neonates with thrombocytopenia require diagnostic evaluation and close follow-up. In addition to the more common etiologies such as infection or antibody-mediated disease, it is important to consider rare causes such as JMML.