A 17-year-old presented with painful lesions on his nipples and areolas of a year’s duration. He was very active in sports activities and stated that he jogged 40 to 60 km per week. Occasionally, he noted bloodstains on his shirt after jogging, and at other times honey crusting was present. His past health was unremarkable except that he had had atopic dermatitis as a child. Physical examination revealed exudative erosions on both nipples and areolas with lichenification.

Jogging may cause or aggravate skin disorders, one of which is jogger’s nipples, as this case illustrates. The condition results from repeated irritation and friction of the nipples against a shirt.1 Predisposing factors include long runs; running in cold weather, making the nipples erect; running in a wet shirt, thereby increasing friction; and the presence of atopic dermatitis.2-3 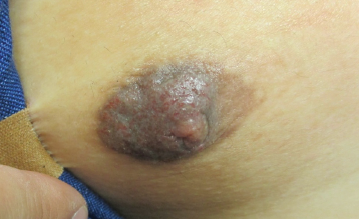 The condition is more common in the male population, presumably because there are more male joggers than female joggers, and that female joggers generally wear firm, well-padded bras.2 Among women, the condition usually occurs in those who do not wear a bra while jogging.

Clinically, jogger’s nipple presents as painful, erythematous, edematous, exudative, and crusted lesions on the nipple. Bleeding from the lesion is common.1 Involvement often is bilateral, and the areolas may be similarly affected.5,6

Coating the nipples with petrolatum ointment, applying adhesive tape over the nipples before long runs, wearing non-cotton shirts, and, in women, wearing sports bras are preventive measures.1,2,5 Ointments are strongly preferred over creams. Topical calcineurin inhibitors (ie, tacrolimus, pimecrolimus) or topical low-potency corticosteroid ointments can be beneficial.6 Topical calcineurin inhibitors often are preferred because of the well-recognized adverse effects of topical corticosteroids such as skin atrophy, telangiectasia, and striae, especially on sensitive skin such as the nipples and areolas. Consider swabbing the area for culture and sensitivity if pus, spreading erythema, or fever are present, and treat with antibiotics accordingly.