An infant girl was delivered full-term at gestational age by normal spontaneous vaginal delivery to a 34-year-old gravida 2, para 1 mother. The amniotic fluid appeared to be meconium-stained. The infant cried immediately after birth and had Apgar scores of 9 and 9 after 1 and 5 minutes. The infant’s abdomen was soft but distended. 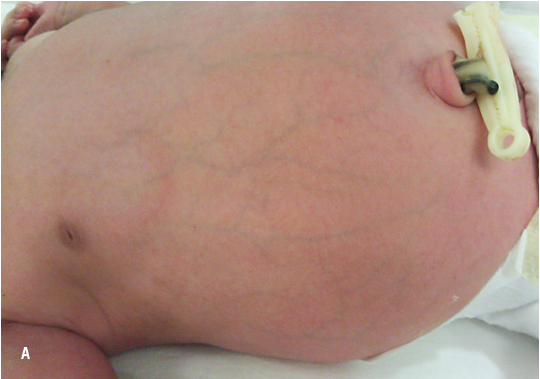 Antenatal ultrasonogram showed multiple dilated loops of the intestine without distal obstruction but with adequate amniotic fluid. In the delivery room, about 20 mL of greenish material was suctioned. The patient was transferred to the neonatal nursery, where approximately 3 hours after birth, she had 3 episodes of a very small amount of greenish vomitus. Her vital signs remained stable. A gastric lavage was done, and approximately 50 mL of greenish fluid was suctioned; small pellets of stool were recovered on rectal examination. 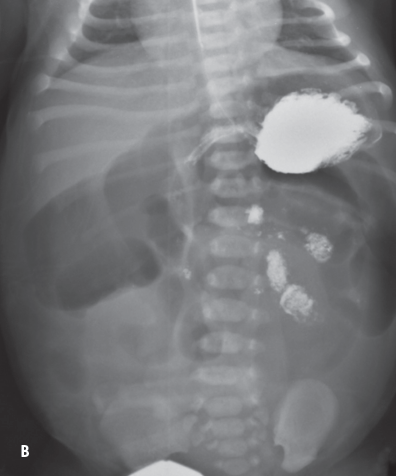 The girl was transferred to pediatric surgery, where another upper GI series confirmed the diagnosis of jejunal atresia. Primary repair was done on the first day of life. The patient received ampicillin and gentamicin for 72 hours. She was started on oral feeding on postoperative day 9, and on full feeds
3 days later. The child made an uneventful recovery, was discharged home at 12 days of age, was being breastfed, and weighed 3.8 kg.

Jejunoileal atresias generally are attributed to intrauterine vascular accidents, which result in segmental infarction and resorption of the fetal intestine. Underlying conditions that potentiate vascular compromise include intestinal volvulus, intussusception, and meconium ileus. Jejunoileal atresias have been linked with multiple births, low birth weight, and prematurity.

Meconium-stained liquor is a classic sign of fetal distress during labor. The liquor is green or brown and fills the pharynx and stomach, and in some cases, fills the trachea and bronchial tree. Because of the need to ensure that the lungs are clear in such cases, the trachea must be aspirated, either under direct vision or through an endotracheal tube, so as to prevent meconium pneumonitis.

Early detection of the lack of meconium in the rectum of children with apparent meconium-stained liquor can alert clinicians instead to the possibility of intestinal obstruction with bile-stained vomiting in utero. The operative and radiologic findings in our case indicated that meconium could never have been passed rectally.