Itchy, Smelly Lesions and Streaked Nails in a Teenager

Physical examination revealed reddish brown papules and plaques with a verrucous texture, primarily on the chest, abdomen, and upper extremities. He also had white and red longitudinal bands on his fingernails, as well as some flat-topped papules in the periungual areas. The rest of the examination findings were unremarkable. 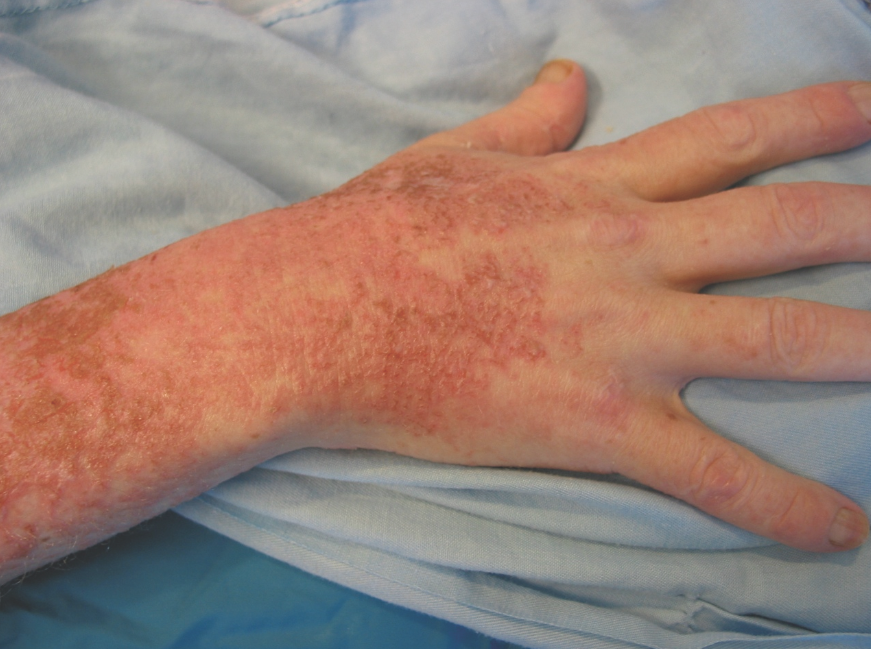 Darier disease, also known as Darier-White disease and keratosis follicularis, is a rare genodermatosis. The disease is characterized histologically by acantholysis, dyskeratosis, and hyperkeratosis and clinically by warty papules and plaques in seborrheic areas.1

The condition was described independently by Ferdinand Jean Darier and James White in 1889, and the disease now bears their names.2,3 The name Darier disease, nevertheless, seems to be more popular and is now in common usage.

The disease is inherited as an autosomal dominant disorder with a high penetrance, although expressivity is variable.4,5 The prevalence has been estimated to be 1 in 30,000 to 100,000.1,6 Both sexes are equally affected, although males tend to be more severely affected than females. Typically, patients present between 6 and 20 years of age, with onset peaking between 11 and 15 years of age.7

The disease is caused by mutations in the ATP2A2 (ATPase, Ca2+ transporting, slow twitch 2) gene that encodes a sarcoplasmic/endoplasmic reticulum Ca2+ adenosine triphosphatase isoform 2 protein (SERCA2).1,4 This calcium ATPase pump plays an essential role in intercellular calcium signaling.1 Mutations in ATP2A2 have been shown to cause severe disruption in calcium homeostasis, leading to depletion of calcium stores in the keratinocytes with resultant formation of hyperkeratotic papules and/or plaques.4 The ATP2A2 gene is located on chromosome 12q23-24.1.5

Exacerbating factors include sunlight, heat, sweating, mechanical trauma, menstruation, and stress.7,8 The disease can also be precipitated by oral lithium carbonate, as well as phenol and ethyl chloride sprays.9

Histopathologic examination of the lesion shows loss of intercellular adhesion (acantholysis) between epidermal cells with corps ronds and suprabasal cleavage as a result of acantholysis, abnormal keratinization (dyskeratosis), and hyperkeratosis in the epidermis.8,10

Skin changes are characterized by greasy discrete, flat-topped, hyperkeratotic papules and plaques that occur in seborrheic areas such as the trunk, lateral sides of the neck, scalp, limbs, and forehead.4 The distribution is often symmetric.

Lesions are itchy; are yellow-brown, brown, or skin-colored; and feel like coarse sandpaper. Lesions may have a foul odor if secondary infection or colonization is present. In flexural areas, lesions may present as large, malodorous, fleshy, exuberant growths.7 On the palms and soles, lesions often appear as hyperkeratotic papules and centrally depressed pits.1,10 Lesions resembling acrokeratosis verruciformis might be seen on the dorsa of hands. Other cutaneous features include café au lait spots and leukodermic macules.11,12

Papules, fissures, and ulcers may develop on the palate, buccal mucosa, or tongue. The gingiva may assume a cobblestone appearance. Oral manifestations are present in approximately 50% of patients with Darier disease.13 Intermittent parotid gland swelling is an infrequent but notable feature.7,10 Presumably, the parotid swelling results from metaplasia of the parotid ductal lining with resultant obstruction to the salivary flow.1

Affected patients often have dry eye syndrome with or, more often, without Sjögren syndrome, keratotic plaques on the eyelid, corneal opacities, and focal keratinization in the limbal conjunctiva.14,15 Other ocular features such as cataract, corneal ulceration, corneal sub-basal nerve involvement, subnormal dark adaption, and retinitis pigmentosa have been described in patients with Darier disease.14,15

The lesions may be cosmetically unsightly and socially embarrassing if they occur in an exposed area. Secondary infection or colonization by bacteria is common, followed by fungi and viruses.5,7

The unsightly appearance, pruritus, irritation, and malodor have an adverse effect on the quality of life.21 Squamous cell carcinoma arising from Darier disease, although rare, has been reported.22

The disease runs a chronic course characterized by remissions and relapses throughout life.

In general, oral retinoids are the most effective treatment for generalized or severe Darier disease.8 Side effects such as mucosal dryness, epistaxis, skin fragility, hypercholesterolemia, hypertriglyceridemia, teratogenicity in women of childbearing age, depression, and suicidal attempts are drawbacks and preclude its routine long-term use. Use of topical and/or oral antibiotics may be necessary for secondary bacterial infection and odor. Affected patients may benefit from genetic counseling.

This patient was treated with a topical antibiotic and hydrocortisone combination, along with oral retinoids, with moderate improvement of the lesions after 3 months.