ABSTRACT: This article, the first of a 2-part series on iron imbalance in pediatric patients, focuses on iron deficiency. It discusses the pathophysiology of iron metabolism, how the body effectively absorbs iron in its heme and nonheme forms, the body’s cellular response to iron depletion, the causes of and diagnostic clues to iron deficiency anemia, and supplementation treatments for iron deficiency in children. Part 2 of this series will focus on iron overload.

Iron is an essential mineral and nutrient in the human body. It is vital for the normal function of bodily processes by which cells generate energy. Too little or too much iron compromises the body’s metabolic and physiologic functions. Inadequate iron in the diet is a nutritional problem for billions of people worldwide.1 Iron is not a product of bodily resources and therefore must be absorbed through the gastrointestinal (GI) pathway as a dietary source.

Millions of people in the United States have anemia due to their inadequate iron stores.2 In 2007, this nutritional deficiency affected 2.4 million U.S. children.3 Iron deficiency in childhood has been linked to lasting cognitive impairment.3

Conversely, too high a bodily iron load also is a health concern. The concept that either too little or too much of an essential nutrient can be harmful seems especially true of iron.

The human body tightly regulates the absorption and recycling of iron. Iron is such an essential element for life that no physiologic mechanism exists in the body for iron excretion.

At baseline, the body of a healthy adult maintains 3 to 5 g of iron. Approximately 66% of iron stores are found in 2 proteins: hemoglobin and myoglobin. These proteins utilize iron to help accept, carry, and release oxygen throughout the body. Of the remaining iron load, 25% to 30% is stored in the body as ferritin or hemosiderin, with the majority as ferritin. Ferritin, an intracellular protein, releases iron in a controlled manner based on bodily need. Measurement of serum ferritin indicates the body’s iron status and is a useful tool for diagnosing iron imbalance. Low ferritin values reflect depleted iron stores. High ferritin values can signal iron overload, hepatic trauma (from the release of ferritin stored in the liver), an inflammatory condition (as a nonspecific acute-phase reactant response), or a malignancy. Hemosiderin, an insoluble iron-storage complex, is a “transformed” ferritin that is composed primarily of ferritin that has been partially digested by autophagosomes.4

The body’s goal is to conserve iron, and physiologic pathways exist to absorb and utilize this mineral. Intestinal mucosal cells of the duodenum and upper jejunum enable maximal absorption of digested iron-containing sources. Initially, mucosal ferritin absorbs iron from the GI tract and stores it in the mucosal cells. When the body requires iron, mucosal ferritin transports it to another protein, mucosal transferrin. Mucosal transferrin, in turn, transfers plasma iron to the transport glycoprotein transferrin. Iron is then transported to the bone marrow for erythropoiesis and to muscle cells for myoglobin. The iron storage pool is in the liver, spleen, bone marrow, and skeletal muscle in the forms of ferritin-bound iron and hemosiderin.4 Hemosiderin is a poor source of replenishing diminished iron stores.

Hepcidin is the iron-regulatory hormone that controls the dietary absorption, storage, and tissue distribution of iron. It decreases iron transfer to blood plasma in 3 ways: from the duodenum; from macrophages involved in recycling senescent erythrocytes; and from iron-storing hepatocytes. Feedback control of hepcidin is regulated by plasma and hepatic iron concentrations and by erythropoietic demand for iron.6

Red blood cell (RBC) destruction occurs in the liver and spleen; iron is recovered from these damaged cells. The iron is packed into transferrin and stored as ferritin-bound iron in the liver. Thus, hepatic tissue serves as the body’s primary physiologic pool of iron. Hepatic ferritin recycles needed iron back to the bone marrow, muscle fibers, and cells. With an increased iron pool, some ferritin is changed into hemosiderin.4

The amount of dietary iron absorbed by the body depends on its food source. Less than 10% of iron is absorbed from a nutritionally balanced diet.8,9 Iron occurs in 2 dietary forms, heme and nonheme. Heme iron is found primarily in animal flesh such as meats, poultry, and fish. This iron originates from the blood and heme-containing proteins in meat and cell mitochondria. Some heme iron also is found in plant cell mitochondria. Nonheme iron is found in both plant and animal sources.10

Heme iron is well absorbed and thus is a significant contributor to the body’s iron stores. It is absorbed through the GI tract at a relatively constant rate. Typically, the intestinal absorption of nonheme iron is less than that of heme iron, with the amount absorbed influenced by dietary factors and the current bodily store. Persons with severe iron deficiency absorb heme and nonheme iron more efficiently and are more responsive to dietary enhancing factors than persons with an established healthy iron pool. In a balanced physiologic state, 1 to 2 mg of iron are absorbed and excreted each day.8

The Institute of Medicine has established a daily estimated average requirement for iron, expressed as mg/d. These iron requirements are listed in table format and vary with age, gender, and pregnancy and lactation.9 Sources of dietary heme and nonheme iron are listed in Table 1.2,10-14 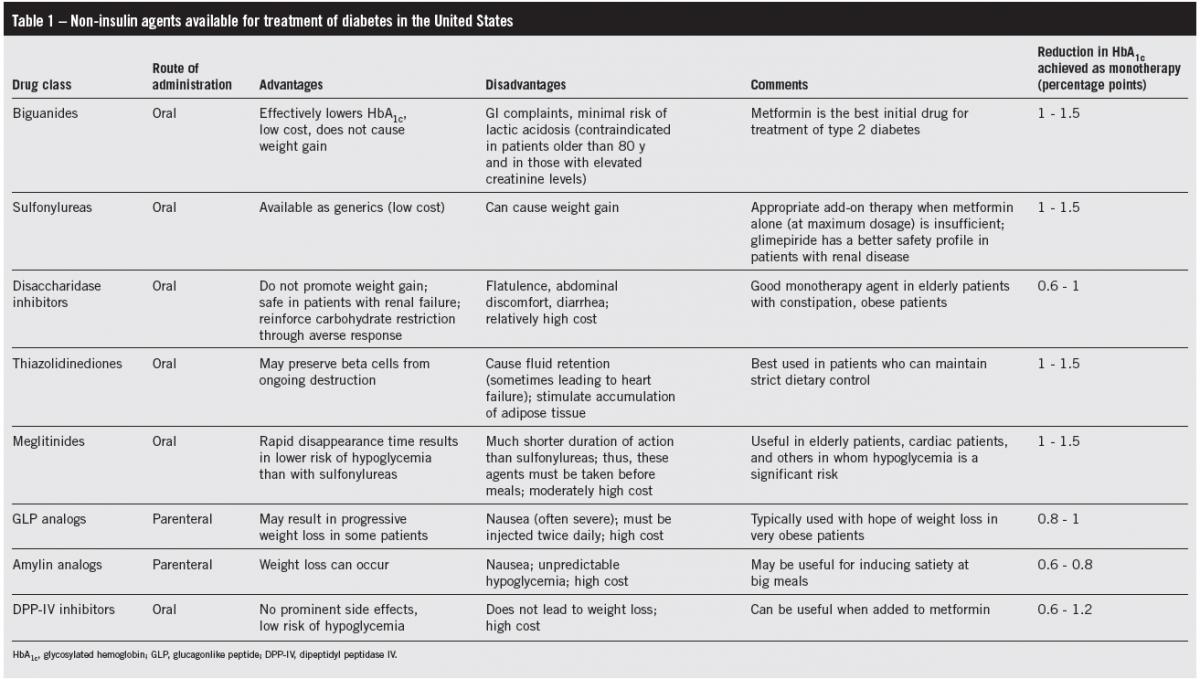 Increased RBC loss or decreased RBC production can cause an overall decrease in RBC mass below a critical level. Iron depletion due to the overutilization of the body’s iron stores without adequate replacement leads to iron-deficient erythropoiesis and, ultimately, iron deficiency anemia. Anemia is defined practically as a hemoglobin (Hgb) level that is less than 2 standard deviations below the average Hgb value for age. Physiologically, anemia is best explained as an Hgb level that is too low to meet the body’s tissue oxygen needs.19

Decreased iron in the diet reflects inadequate consumption of bioavailable iron sources. Children who are at high risk include premature infants; infants primarily fed cow’s milk before the age of 12 months; exclusively breastfed infants younger than 6 months of age who are not fed iron-fortified cereals or another dietary source of iron; formula-fed infants who do not receive standard iron-fortified formulas8;and children aged 1 to 5 years who drink more than 24 oz (three 8-oz bottles) of cow’s milk, goat’s milk, or soy milk daily. Excess milk consumption decreases a child’s interest in eating other foods with better iron content, such as meats and iron-fortified cereals. Other children at increased risk for an iron-deficient diet are those on restricted diets and those undergoing growth spurts without proper nutritional options.

Patients with a low iron pool can remain asymptomatic despite laboratory values that indicate iron deficiency anemia. Presenting signs and symptoms are related to decreased oxygen delivery to the body’s tissues. Clinical signs of iron deficiency are pallor, pale conjunctivae, tachycardia, systolic ejection murmur, hair loss, and glossitis. Koilonychia (“spooning” of the fingernails and/or toenails) and an appetite for nonnutritive items such as ice, soil, clay, or paper (pica), have been described in patients with a longstanding anemic state. Symptoms include irritability, chronic fatigue or generalized weakness, headache, a “whooshing” heartbeat sound in the ears, shortness of breath, and chest pain with activity.15,19

Table 2 summarizes the signs and symptoms of iron deficiency anemia.3,19,21 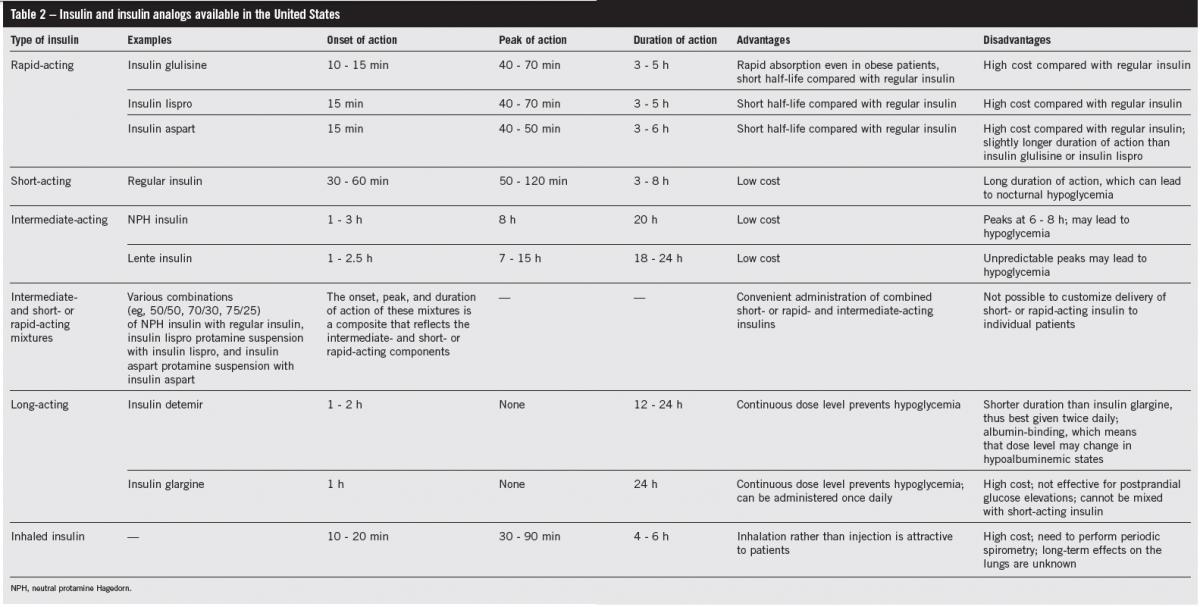 In addition, iron deficiency and lead toxicity (also a microcytosis) can occur concurrently. A serum lead level test and a free erythrocyte protoporphyrin (FEP) test help determine whether lead toxicity is a concern.19,20

Prescribed iron supplements require patients to follow a daily regimen for several months to adequately replace their depleted iron pool. Positive iron absorption responses are reflected by improvements in the reticulocyte count (within 3-10 days, average 7 days) and an increase in Hgb values (2-4 weeks after initiation). Oral treatment should be continued for 3 to 6 months,20 along with scheduled continuity of care. Patients should take iron supplements between meals, either 2 hours before or 1 hour after a meal, to maximize potential absorption.22 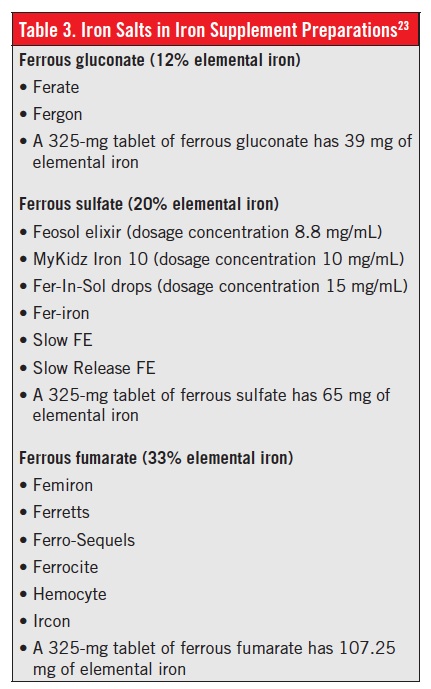 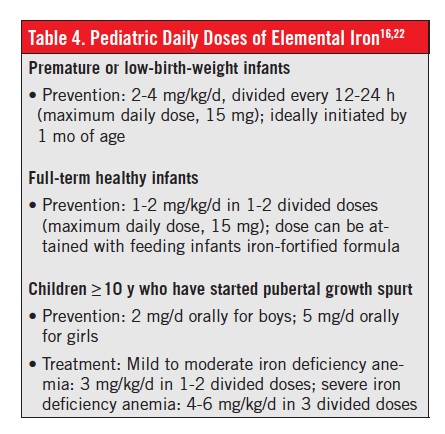 For IV administration, consultation with a hematologist is recommended. IV iron is available as iron dextran, iron sucrose, and sodium ferric gluconate preparations.IV iron dextran is dosed at 50 mg/mL. Low-molecular-weight iron dextran is preferred in order to minimize the possible occurrence of severe allergic reactions. An initial test dose of 10 to 25 mg (0.5 mL) should be given, followed by a 30- to 60-minute observation period, before the infusion is continued. Anaphylaxis and hypotension often are associated with iron dextran preparations. Urticaria, pruritus, myalgia, and arthralgia are other potential adverse effects.16,20

Blood transfusions. RBC transfusions are used to treat patients with severe iron deficiency anemia who are actively bleeding or who have cardiovascular instability. Guidance from the hematology team is recommended. Inpatient hospital admission with following of proper transfusion protocol is required. The benefits and risks of receiving blood products must be discussed thoroughly with the patient and/or the patient’s caregiver before initiating this procedure.

Iron has an essential role in sustaining the body’s balance. Too little iron creates an unhealthy imbalance in which metabolic and physiologic function are significantly compromised. Given iron’s vital role, it is important to understand how to identify and treat iron depletion and deficiency. Early identification of iron depletion should prompt a diagnostic investigation and therapeutic assessment. To reduce incidence of this hematologic condition, patients and caregivers should be educated about its underlying causes and the roles of dietary iron and medicinal iron supplements.