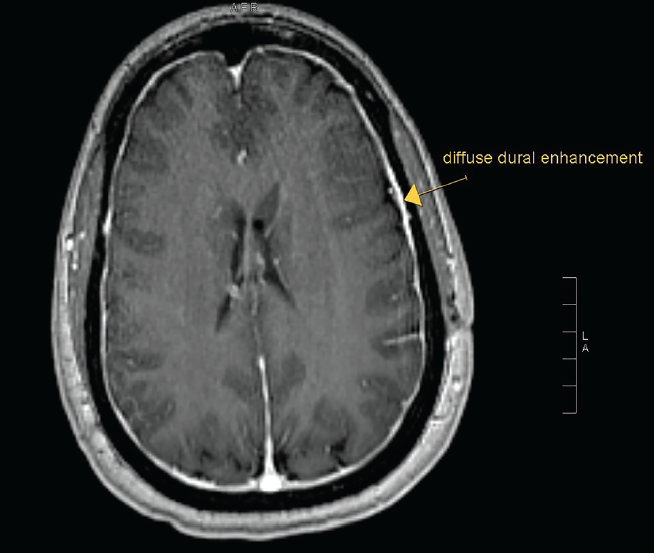 A 39-year-old woman with a past medical history of idiopathic intracranial hypertension (IIH) presented with worsening headache, nausea, vomiting, and blurry vision.

History. Her 15-year IIH history had been complicated, necessitating multiple ventricular shunt revisions. The latest shunt revision had been 3 months prior to presentation and was due to obstruction of her ventriculoperitoneal (VP) and lumboperitoneal (LP) shunts. The patient reported a change in symptom characteristics since the most recent shunt revision. Her current symptoms worsened upon sitting and standing but resolved when supine. She was a singer, and she had cancelled a concert prior to admission, stating that when she sang high notes, her headache worsened. Associated symptoms included progressive forgetfulness and 4 self-reported seizures over the past 3 months.

She had had multiple emergency department evaluations in the preceding 3 months, with diagnostic impressions that her ventricular shunts were functioning properly. During the evaluations, several lumbar punctures were performed, with opening pressures ranging from 16 to 26 cm Hg. Prior to her latest revision, lumbar punctures had improved her headaches. Since then, her headaches had worsened after each lumbar puncture. Ophthalmology consultation consistently failed to show evidence of papilledema.

Diagnostic tests. After multiple dry bedside lumbar puncture attempts, an interventional radiologist assisted with obtaining a lumbar puncture, revealing an opening pressure of 26 cm Hg. Cerebrospinal fluid (CSF) analysis results were unremarkable except for an elevated protein level of 201 mg/dL. Results of a computed tomography scan of the head and a ventricular shunt radiograph series were normal.

The patient’s headache initially was attributed to her IIH. The diagnosis of IIH was challenged, however, given her change in symptom characteristics and a lack of response to lumbar punctures. Magnetic resonance imaging (MRI) with magnetic resonance venography was ordered to evaluate for a cerebral venous thrombosis; the results were negative for thrombosis, but the scans did show evidence of diffuse dural enhancement, ventricular decompression, and venous engorgement (Figure).

The patient’s orthostatic symptoms, elevated CSF protein concentration, and MRI findings supported a diagnosis of intracranial hypotension (ICH) syndrome, with the hypothesized cause being overdrainage of her ventricular shunts.

Discussion. IIH is characterized by an increase in intracranial cerebral pressure with no identifiable cause. Clinical features of IIH have been defined by the International Headache Society in the second edition of the International Classification of Headache Disorders (ICHD-II)1 and include a progressive, diffuse, constant headache that may be aggravated by coughing or straining. The neurologic examination may demonstrate papilledema, a visual field defect, or a sixth nerve palsy. An increased CSF opening pressure with normal CSF analysis results is key to the diagnosis. Headaches typically improve after withdrawal of CSF fluid because of the immediate reduction in CSF pressure.2

ICH syndrome is characterized by orthostatic headaches that may be exacerbated by laughing, coughing, or other Valsalva maneuvers. Associated symptoms also are orthostatic and include nausea, vomiting, dizziness, diplopia, blurry vision, and tinnitus.3 Unrecognized, significant morbidity and mortality may result. Diagnostic criteria of spontaneous ICH also are outlined in the ICHD-II.1

A diagnosis of ICH syndrome is supported by the demonstration of decreased CSF opening pressure on lumbar puncture; however, cases of spontaneous ICH with normal CSF opening pressures have been reported.4 CSF analysis results may be normal or may show elevated protein concentrations, with values greater than 100 mg/dL being common.5 The most common MRI abnormality is diffuse pachymeningeal enhancement. Further imaging findings include a decreased size of the ventricular system, engorged dural venous sinuses, and subdural hygromas.6

ICH syndrome can be spontaneous or iatrogenic. Spontaneous ICH is thought to be secondary to a persistent CSF leak or decreased CSF production. In patients with ventricular shunt devices, overdrainage complications are common and can lead to ICH syndrome.7

Although the symptoms of IIH and ICH syndrome overlap, the characteristics of the symptoms differ, emphasizing the importance of a thorough, detailed patient history in making the proper diagnosis.

Outcome of the case. Our patient presented with features supporting a diagnosis of ICH syndrome rather than IIH as the cause of her headaches. Contradicting an ICH syndrome diagnosis, however, were several CSF opening pressures that were normal to mildly elevated. Given the temporal relationship of the patient’s orthostatic symptoms, elevated CSF protein concentration, and MRI finding of diffuse dural enhancement to the revision of her 2 ventricular shunts, it was presumed that the etiology of a low CSF pressure syndrome was overdrainage of her VP and LP shunts. Neurosurgical consultation supported a diagnosis of ICH syndrome, resulting in placement of a programmable valve in her VP shunt and ligation of her LP shunt.

A day after her neurosurgical procedure, the patient was out of bed and walking without symptoms.