Intimal sarcoma of the aorta is a rare and aggressive neoplasm. Fewer than 140 cases of aortic sarcoma have been reported, with <40 cases classified as angiosarcoma.1-3  Abdominal aortic angiosarcomas are rare malignancies most often mimicking aortoiliac occlusive disease or aneurysmal arteriosclerotic disease, both clinically and on imaging studies. Most angiosarcomas are an unexpected clinical diagnosis and are diagnosed pathologically in surgical patients or during autopsy.3 We report the case of an 80-year-old man with an atypical presentation of intimal angiosarcoma of the abdominal aorta. The diagnosis was confirmed by the autopsy findings. To the best of our knowledge, the patient described in our article is one of the oldest reported cases of intimal angiosarcoma of the abdominal aorta.

An 80-year-old man presented to the emergency department with a 3-week history of fever, progressive dyspnea on exertion, symptomatic anemia, and angina. He was admitted to the geriatric department for further evaluation of his angina secondary to symptomatic anemia and fever. The patient’s medical history was significant for spondyloarthrosis and benign prostatic hypertrophy, and his regular medications at the time of admission were doxazosin 4 mg daily and ibuprofen taken occasionally as needed. He lived alone and was independent in basic and instrumental activities of daily living.

Positive physical examination findings included pale mucosa, a few bilateral pulmonary crepitations on chest auscultation, and mild hepatosplenomegaly on abdominal palpation. The patient’s hematologic profile indicated inflammatory anemia, with a hemoglobin level of 7.9 g/dL. An endoscopic study did not reveal any sources of gastrointestinal bleeding, and a thoracoabdominal computed  tomography (CT) scan showed hepatosplenomegaly, splenic infarcts, and several vertebral lesions. A focal filling defect in the lumen of the proximal abdominal aorta (also detected on thoracoabdominal CT) was interpreted as aortic atherosclerosis. A cardiac source of embolism was not found on a transesophageal echocardiogram, and the patient’s fever persisted despite having received a broad-spectrum antibiotic for >1 month.

A splenectomy was performed. An immunohistochemical study of the vascular lesion was positive for CD31 and CD34 markers, factor VIII, and vimentin, and was negative for queratins, actins, calponin, muscle-specific myosin, desmin, and CD68 and CD163 markers—a pattern suggestive of endothelial angiosarcoma.2 Magnetic resonance imaging (MRI) of the abdominal aorta, including T1- and T2-weighted images and dynamic contrast-enhanced angiographic sequence, was performed, showing a fuzzy polypoid thickening of the endoluminal wall above the celiac trunk (measuring 22 x 17 x 17 mm), compatible with a primary aortic neoplasm. A volume-rendered image of the gadolinium-enhanced magnetic resonance angiography demonstrated a filling defect at the dorsal limit of the abdominal aorta, proximal to the emerging celiac trunk. The rest of the abdominal aorta, celiac trunk, superior mesenteric artery, and iliac arteries appeared to have a regular shape (Figure).

Two months after admission, the patient died of multiple organ failure; an autopsy confirmed the diagnosis of intimal angiosarcoma of the abdominal aorta with multiple bone and visceral metastases. 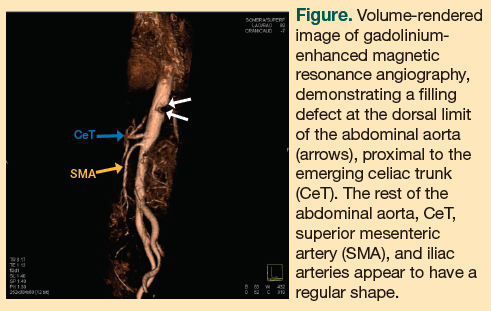 Since the first description of aortic sarcoma in 1873,4 <140 cases of these tumors have been reported, with <40 classified as angiosarcoma.1-3 The clinical presentation of angiosarcoma is often nonspecific, which makes it difficult to diagnose. Peripheral thromboembolic complications are the most frequently described presenting feature, but patients may present with back or abdominal pain, weight loss, or decreased peripheral pulses2 (the case patient discussed in our article had none of these symptoms). Angiosarcoma often mimics aortoiliac occlusive or aneurysmal arteriosclerotic disease clinically and on imaging studies. The large majority are unexpected clinical diagnoses and are diagnosed pathologically in surgical patients or during autopsy.3 Metastases have been described in ≥50% of patients upon diagnosis of angiosarcoma, their sites being the liver, spleen, kidneys, adrenal glands, mesentery, small bowel, esophagus, pancreas, skin, lungs, pleurae, and bones.1-3,5

Angiosarcomas have been classified clinicopathologically into intimal and mural subtypes. This is significant because these subtypes have different presentations and prognoses.5 Intimal angiosarcomas (as seen in the case patient) are polypoid, involve the intima, grow in the direction of the aortic lumen, and present because of vessel occlusion or embolism. Mural angiosarcomas are less common, originate in the media or adventitia, and invade surrounding structures. The diversity of immunohistological results and the problem of exact classification of histological origin of primarily malignant tumors of the abdominal aorta have been discussed.5

Digital subtraction angiography has been considered the classic method for evaluating aortic diseases; however, it is invasive, involves nephrotoxic iodinated contrast agent and ionizing radiation, and provides a single-lumen opacification without depiction of the vessel wall. The noninvasive radiological modalities that are currently used most frequently to identify abdominal aortic diseases are ultrasonography, CT scanning, and MRI. Ultrasonography is widely available and can be performed quickly and easily at the bedside; however, it has a limited field of view and a diagnostic accuracy that largely depends on the experience of the person performing the scan.6 CT scanning, multidetector CT angiography, and MRI allow the evaluation of the aortic wall and vessel lumen, detection of unsuspected extraluminal abnormalities, and multiplanar postprocessing for interventional planning.6,7 Although CT scanning is useful in the diagnosis of atheromatous disease,8 MRI can assist in differentiating an intravascular tumor growth from thrombosis.9

As modern cross-sectional imaging modalities provide exquisite, detailed assessment of the vessels, these tumors are likely to be diagnosed with greater frequency in the future because the aging process is commonly associated with increased aortic atherosclerotic vascular disease. Distinguishing aortoiliac occlusive or aneurysmal arteriosclerotic disease from aortic sarcomas in older adults will become easier with these new imaging modalities.

The overall prognosis of intimal sarcomas of the aorta is poor, with death resulting in most individuals within a few months of diagnosis.10 The only effective treatment is excision of the lesion with the arterial wall, leaving clear margins. Radiation and chemotherapy could be effective therapies in patients with early stage disease, but at this time there is no clear evidence of therapeutic benefits.

Although the aging process is commonly associated with increased aortic atherosclerotic vascular disease, clinicians should consider aortic sarcomas in the differential diagnosis of aortoiliac occlusive or aneurysmal arteriosclerotic disease in the elderly since most patients with these tumors are >60 years of age.

1. Chiche L, Mongrédien B, Brocheriou I, Kieffer E. Primary tumors of the thoracoabdominal aorta: surgical treatment of 5 patients and review of the literature. Ann Vasc Surg. 2003;17(4):354-364.