A 20-year-old young woman presented to the emergency department with a 4-day history of sudden-onset pain and tightness in her lower chest. The pain’s intensity had progressed from 8 to 10 on a 10-point scale and now radiated toward her back. The pain was aggravated with exertion and deep breaths, with no relieving factors present.

She had an associated productive mucoid cough, shortness of breath, and intermittent fever with chills and night sweats. She also reported having had one episode of nonbilious and nonbloody vomiting 4 days before symptom onset. She had no recent history of rash, joint pain, sick contacts, or trauma.

One year ago, the patient had been diagnosed with major depression and anxiety and had been started on trazodone 100 mg daily and citalopram 20 mg daily. She had smoked approximately half a pack of cigarettes per day for the previous 6 months.

On physical examination, the patient was in moderate distress, with a temperature of 37.9°C (maximum, 39.0°C), heart rate of 120 beats/min, respiratory rate of 26 breaths/min, blood pressure of 120/48 mm Hg, and oxygen saturation of 93% on room air. Examination findings were unremarkable except for decreased chest expansion related to pain and tenderness over the parasternal region. 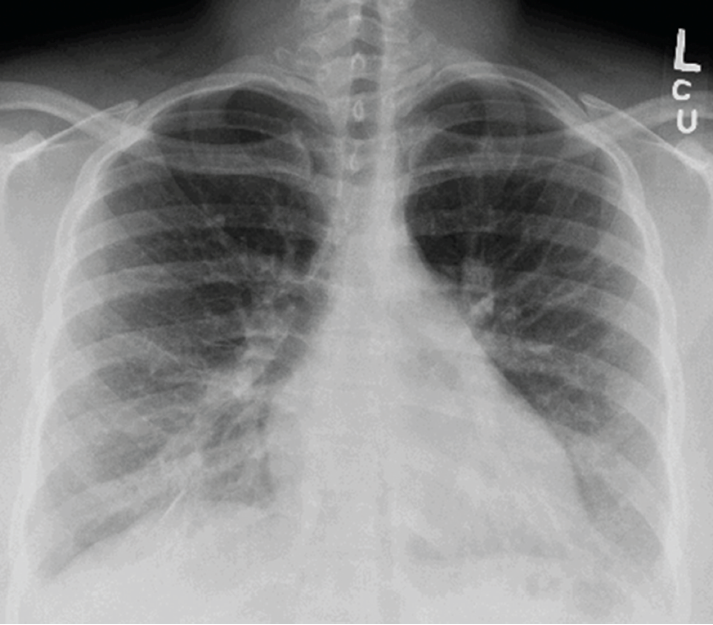 Figure 1. Chest radiograph at presentation of a young woman with chest pain and tightness showing bilateral reticulonodular infiltrates, mainly basal in distribution, with blunting of the costophrenic angles.

With a provisional diagnosis of pneumonia, a regimen of ceftriaxone was started, and oral azithromycin was added to treat atypical organisms, but the patient showed no signs of improvement over 3 days. Laboratory results, including coagulation profile, D-dimer, troponin I, creatine kinase-MB, thyroid-stimulating hormone, free thyroxine, rheumatoid factor, cytoplasmic and perinuclear antineutrophil cytoplasmic antibodies, liver profile, purified protein derivative, and urine toxicology, were unremarkable.

Detailed social history revealed that for the past 6 years, she had been inhaling computer duster (Dust-Off), averaging 10 cans per day. On the third day of admission, bronchoscopy was performed; bronchoalveolar lavage fluid (BALF) analysis revealed a total white cell count of 1556/µL, with 5% polymorphs, 11% lymphocytes, 2% monocytes, and 82% eosinophils. No malignant cells were identified on cytology examination, and the specimen did not grow any bacteria, fungi, or mycobacteria.

The patient was diagnosed with acute eosinophilic pneumonia (AEP) and was started on a 3-week course of oral prednisone 60 mg daily. She showed significant improvement within the first few days of treatment. She stopped inhaling the computer duster but despite counseling continued to smoke about 1 pack of cigarettes every 3 days.

CT of the chest 2 months later showed resolution of the infiltrates and lymphadenopathy (Figure 3). Corticosteroids were tapered over the next month and then stopped. She showed no recurrence of symptoms during a period of 1 year. 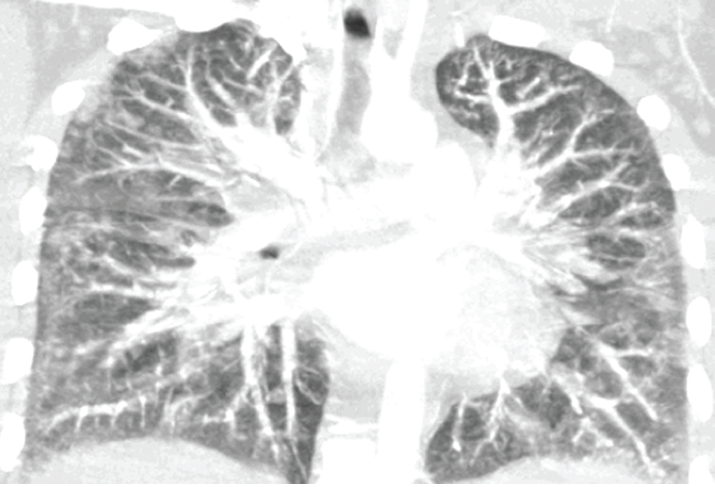 The diagnostic criteria for AEP include the following1:

• Acute onset of any symptoms 7 days or less before presentation.

• Lung eosinophilia indicated by BALF differential with 25% or greater eosinophils, or a predominance of eosinophils in open-lung biopsy tissue sample.

• No hypersensitivity to medications, no historical or laboratory evidence of infection, and no other known cause of acute eosinophilic
lung disease.

Since the first description of AEP in 1989,2,3 many reports have linked this disease with cigarette smoking,4 and this entity has been described in at least one New York City firefighter who was exposed to debris after collapse of the World Trade Center on September 11, 2001.5 To our knowledge, only a single case has been reported so far in which the development of AEP was associated with inhalation abuse of 1,1,1-trichloroethane, a solvent once contained in the fabric protector Scotchgard.6 We report the first case of an adolescent who developed AEP following 6 years of intentionally inhaling Dust-Off computer duster, which contains 1,1-difluoroethane.

More than 22 million Americans age 12 years and older have used inhalants, and more than 750,000 Americans use inhalants for the first time each year.7 A recent study found that inhalant initiation in the United States peaks at approximately 14 years of age (which is slightly younger than smoking cigarettes or marijuana) and is associated with other recreational drug use.8

The exact pathogenesis of AEP remains unclear but Fujimura and colleagues9 showed that in BALF from patients with AEP, the total number of cells, neutrophils, lymphocytes, and eosinophils, along with the ratio of CD4 to CD8 cells, were increased compared with control subjects. An increase in the CD4 to CD8 ratio at onset indicates the induction of helper T cells, which produces interleukin-5 (IL-5). Elevated IL-5 in the lungs may initiate recruitment of eosinophils10 and release chemical mediators from eosinophils,11 which increase the permeability of the vessels. Interestingly, elevated IL-5 in BALF subsided with treatment.12 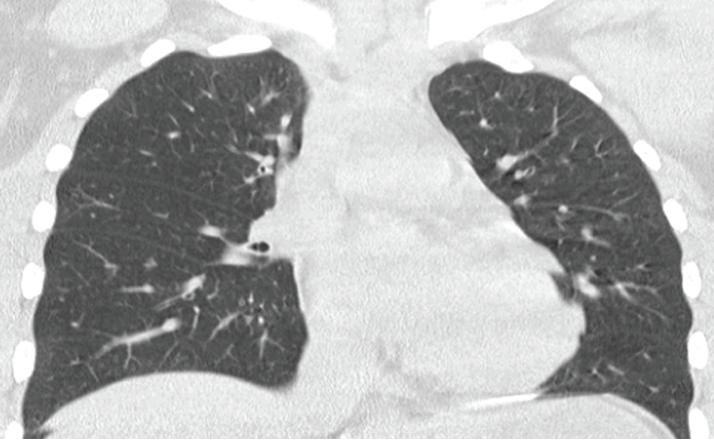 Figure 3. After the young woman’s discontinuation of the inhalant, a high-resolution CT scan of the chest taken 2 months later showed resolution of the subpleural infiltrates and lymphadenopathy.

Similar to cases described in previous reports,2,3,6 our patient showed dramatic improvement with the initiation of a regimen of oral corticosteroids.

As demonstrated by our case, AEP and infectious pneumonia may have a similar clinical presentation, but it is very important to distinguish between the two, because the management differs for these conditions. The diagnosis of AEP usually can be made based on results of a thorough social history, in addition to radiographic evidence and prominent eosinophilia demonstrated in BALF. We believe that 1,1-difluoroethane in computer duster was responsible for the development of AEP in our patient, with cigarette smoking an exacerbating factor.

Given the substantial prevalence of inhalant abuse by adolescents in the United States, pediatricians should be aware of this inhalant-related AEP so that appropriate treatment can be started in a timely manner.

Jack Nickless, MD, is a resident in the Department of Family Medicine at Advocate Christ Medical Center in Oak Lawn, IL.

Margo Bell, MD, is the director of inpatient pediatrics and a senior attending physician in the Division of Adolescent and Young Adult Medicine at John H. Stroger Jr. Hospital of Cook County.