Ingestion of an Expired, 40-Year-Old Medication

A 14-year-old girl presented in the emergency department (ED) after taking an expired medication. A family member of the girl had recently moved into a nursing home, and the girl had found the medication while helping to sort through the family member’s belongings.

The girl’s mother reported that the girl had been acting “strange.” After being confronted about her behavior, the girl had admitted to having taken 1 capsule of an expired medication she had found (Figure).

In the ED, the girl’s vital signs and mental state were normal. However, the results of a physical examination were notable for normal pupillary size (no miosis), and a urine toxicology screen was positive for opiates. Prior to discharge, resources for counseling were provided.

The medication the girl had taken was Phenaphen #2, a capsule containing acetaminophen 325 mg with codeine 15 mg, marketed by the now defunct A. H. Robins pharmaceutical company at the time the prescription was filled in 1976. Prescription medications frequently go unused or partially used, and pain medications are one of the largest categories of medications that are not used to completion.1,2 Most often, the unused medication is stored in the home rather than discarded.2 Improperly stored medications may pose a risk for childhood poisoning.3 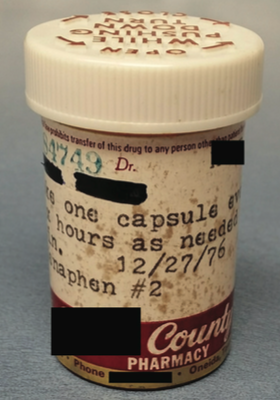 Many stored medications pass their expiration dates approximately 12 to 60 months from the date of manufacture. Expiration dates provide assurance that the medication is usable until the stated time, though most medications retain biologic activity for much longer.4,5 However, full absorption cannot be assured after a medication expires, and toxicity due to degradants is an additional, albeit largely theoretical concern.6,7

Current recommendations call for the use of medication take-back programs to dispose of expired medications. If these programs are not available, unused medications should be placed in the trash after being mixed with undesirable refuse such as used kitty litter or coffee grounds. Medications should not be flushed down the toilet because such disposal has contributed to contamination of municipal water sources. More information on proper disposal of unused medications is available through the US Food and Drug Administration website.8

Dante Pappano, MD, MPH, is with the Department of Emergency Medicine at East Tennessee Children’s Hospital in Knoxville, Tennessee.