A 19-year-old male college student presented to the emergency department (ED) for progressively worsening lower back pain of 3 weeks’ duration, as well as left lower extremity pain, swelling, and weakness that had begun approximately 2 days prior to his visit. His history included a 10-hour car ride approximately 2 weeks prior to admission, as well as studying without a break for extended periods of time. Clinical concern for a deep vein thrombosis (DVT) was raised.

Results of ultrasonography of the left lower extremity showed thrombosis within the left external iliac vein and left common femoral vein with superficial thrombosis of the left great saphenous vein. He was started on anticoagulation therapy and was admitted to the hospital for further evaluation. At the time of his admission, the patient denied any family history of thrombophilia or malignancy. He was a nonsmoker who occasionally drank alcohol. He denied illicit drug use.

He was evaluated by the hematology service for coagulopathy and was found to be heterozygous for the factor V Leiden gene (R506Q mutation). Results of tests for protein C and protein S activity, lupus anticoagulant, prothrombin G20210A mutation, and antithrombin III levels were negative or normal.

Following evaluation in the ED, the patient underwent magnetic resonance imaging (MRI) of the lumbar spine with and without contrast for further evaluation of his lower back pain and left lower limb weakness. The MRI results demonstrated a diminutive inferior vena cava (IVC) with prominent vasculature adjacent to the lumbar vertebral bodies. Intraluminal signal was abnormal, and the presence of thrombus could not be excluded.

To further evaluate the MRI findings, computed tomography (CT) angiography of the chest, abdomen, and pelvis was performed. Findings included a prominent azygos vein (Figure 1), multiple varices within the pararenal fat bilaterally (Figure 2) with absence of normal renal veins (Figure 3), absence of the IVC, and prominent varices in the expected area of the hemiazygos veins within the retroperitoneum. The common femoral and iliac veins were visualized; however, they were unopacified (ie, did not contain contrast) (Figure 4). 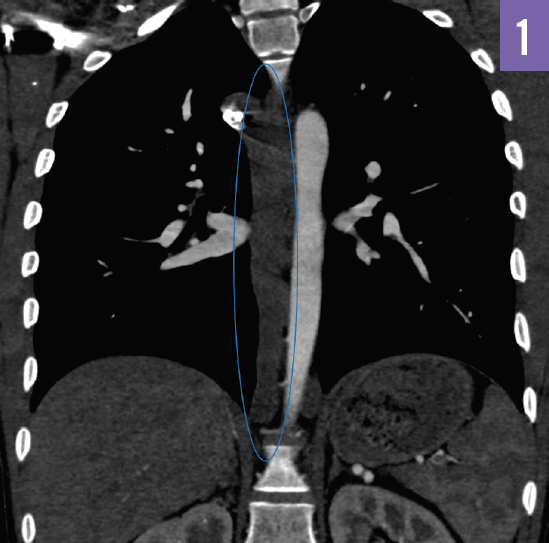 Figure 1. CT with contrast of the thorax in coronal view. The blue oval demarcates the prominent azygos vein. 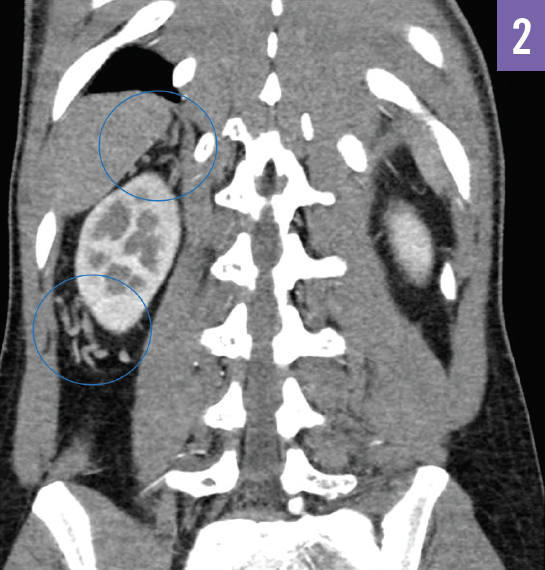 Figure 2. CT with contrast of the abdomen in coronal view. The blue circles demarcate the tortuous varices within the pararenal fat surrounding the right kidney. 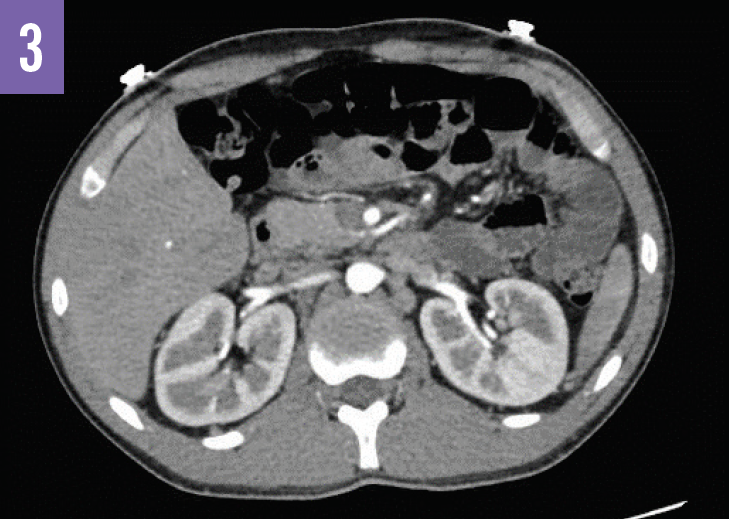 Figure 3. CT with contrast of the abdomen in cross-sectional view demonstrating the absence of normal renal vein structures. 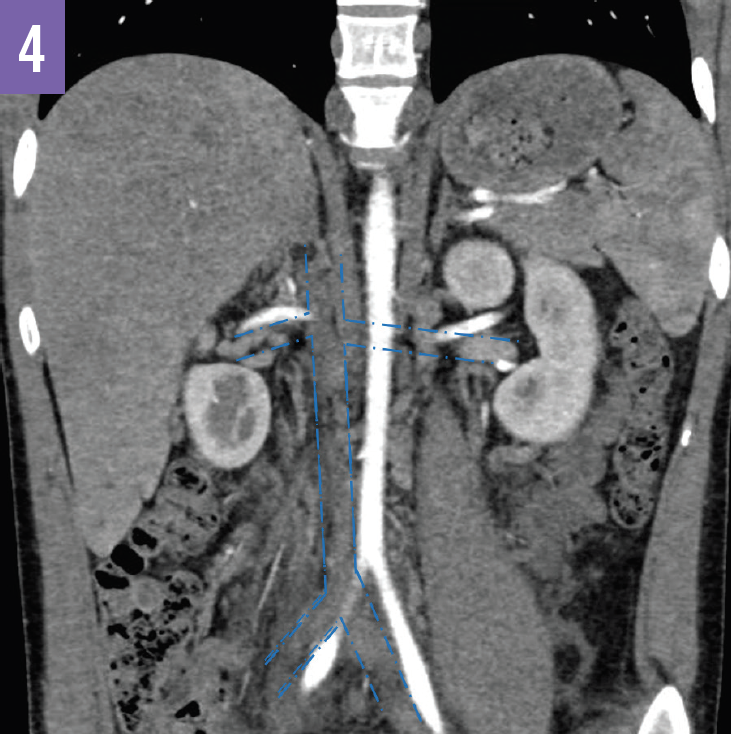 Figure 4. CT with contrast of the abdomen in coronal view. The blue dashed lines demarcate the expected area of the common iliac veins joining to form the IVC.

On abdominal ultrasonography results, the intrahepatic IVC was only seen as a short segment within the liver before entering the right atrium, without any remainder of the IVC visualized. Accordingly, the intrahepatic veins were noted to drain into the right atrium. Again, thrombus was identified in the left iliac vein. The main renal veins were not visualized, and the presence of numerous dilated collateral veins was reported.

The patient was initially started on therapeutic enoxaparin and then bridged to warfarin. A lack of renal veins bilaterally, as in our patient’s case, may result in compromised blood flow, and close renal monitoring may be of benefit. However, our patient had normal renal function and normal-size kidneys without evidence of compromised blood flow; therefore, no surgical intervention was indicated.

Discussion. Vascular anomalies involving the IVC are uncommon and are estimated to be present in approximately 0.3% to 0.5% of the general population. IVC agenesis is a rare disorder with a prevalence of 0.0005% to 1% in the general population.1,2 Since the first case was reported in 1891,3 there have been 27 case reports and case series published.

The most commonly reported presenting symptom of IVC agenesis in young adults is DVT.4 IVC agenesis is estimated to be present in 5% of the population younger than 30 years who present with unprovoked DVT.1 Other common presentations include intractable lower back pain, sciatica,5 and lower extremity numbness.6 Less common presentations include venous dilatations and cyanosis of the lower abdominal wall and lower extremities in newborns,7 menorrhagia and pelvic pain in women,8 and dyspnea due to pulmonary arteriovenous malformations9; emergent circumstances can also present with spontaneous rupture of collateral venous aneurysms.10

IVC anomalies occur from a deviation in normal vascular development during the sixth to eighth week of gestation. IVC development depends on anastomosis of 3 pairs of embryonic veins—the posterior cardinal veins, the subcardinal veins, and the supracardinal veins.11,12 IVC absence is thought to be related to intrauterine thrombosis or dysontogenesis.13 As in our patient’s case, collateralization allows for drainage of the lower extremities and the kidneys, which can be problematic if the anomaly is undiagnosed.

Definitive diagnosis is most often made with CT. The current management recommendation for patients with IVC anomalies is prophylactic anticoagulation therapy to prevent serious life-threatening sequelae; additional recommendations include avoidance of prolonged immobility and avoidance of oral contraceptive use in women. Successful surgical treatments for IVC anomalies include IVC prosthetic replacement,14 percutaneous endovascular creation of an IVC,15 and replacement of the IVC with an external ring-supported polytetrafluoroethylene graft.16

Ultimately, any patient younger than 30 years presenting with a DVT or chronic lower back pain should be evaluated further for coagulopathy and for vascular anomaly, including IVC agenesis. Appropriate imaging evaluation with CT angiography and/or MRI can provide a diagnosis and aid in future medical or surgical management.