A 17-day-old full-term boy presented to the emergency department with severe jaundice. His parents reported poor feeding, decreased activity, and a pale and yellow appearance.

The infant was being breastfed, had an uneventful birth, and had been discharged home with a transcutaneous bilirubin concentration of 10.4 mg/dL at 67 hours of life. His total serum bilirubin (TsB) at 5 days had increased to 17.5 mg/dL, with a direct bilirubin level of 0.1 mg/dL. The TsB concentration at 8 days was 15.8 mg/dL, and his hemoglobin (Hgb) concentration was 16.2 g/dL. 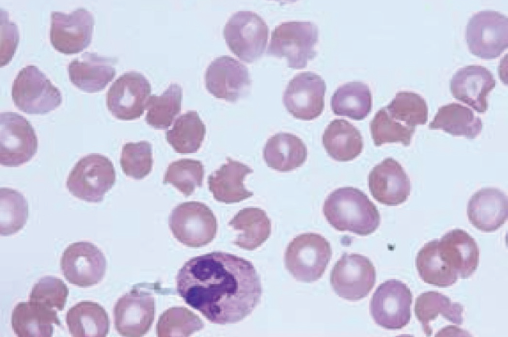 Peripheral blood smear of a newborn boy with pyknocytosis at age 3 weeks as reported by Kraus and colleagues.2 Courtesy of Ben-Zion Garty, MD. Reproduced with permission.

Physical examination revealed a pale, jaundiced baby with splenomegaly and a heart murmur. Laboratory test results showed a TsB of 28.5 mg/dL, a direct bilirubin of 2.3 mg/dL, a Hgb of 9.1 g/dL, a reticulocyte count of 2.2%, and a lactate dehydrogenase level of 1,097 U/L. Aside from the elevated bilirubin concentration, the results of a comprehensive metabolic panel were normal. He was admitted to the hospital’s pediatrics department, and phototherapy was started.

Within 2 hours of admission, the newborn had apneic spells, with oxygen saturation percentage dropping into the 80s, and episodes of tachycardia in the 150 beats per minute range. The result of a stat Hgb test was 7.3 g/dL. Hematology was consulted and, after additional laboratory blood draws, the infant received a transfusion of packed red blood cells (RBCs), increasing the Hgb to 10.1 mg/dL. His blood type was O Rh-positive; Coombs test results were negative for antiglobulin; levels of glucose-6-phosphate dehydrogenase, haptoglobin, and pyruvate kinase were normal; and results were negative for Epstein-Barr virus and human parvovirus B19 antibodies.

Further questioning unraveled that the infant’s two older siblings had been admitted to the hospital in their first few weeks of life, both with a similar presentation, and they had responded to phototherapy and blood transfusions. This condition was self-limited in both siblings and had resolved by 4 months of age. A definitive cause was not identified.

Our patient’s peripheral blood smear showed many schistocytes and prominent pyknocytes consistent with the diagnosis of infantile pyknocytosis. He responded well to phototherapy and transfusion and was discharged home in a few days.

Infantile pyknocytosis, first described by Tuffy and colleagues in 1959,1 is a rare form of neonatal hemolytic anemia that causes severe jaundice and symptomatic anemia in the neonatal period. Pyknocytes are distorted, irregular, and densely staining erythrocytes with abnormal spiny projections.1-3 Little is known about the etiology, epidemiology, and clinical features of pyknocytosis; Kraus and colleagues2 reported only 53 published cases as of 2010. It is a transient anemia that peaks at approximately 2 to 4 weeks of age and completely resolves by 4 months of age with no documented long-term complications.

Clinical manifestations include hemolysis, pallor, jaundice, and, occasionally, hepatosplenomegaly.4 Diagnosis is based on clinical findings and the characteristic presence of pyknocytes on the peripheral smear. A strong family history usually is present. Treatment is mainly supportive with blood transfusions for symptomatic anemia and phototherapy for jaundice.

Normal donor RBCs reportedly have taken on the distorted appearance of pyknocytes after transfusion in some cases, and the rate of destruction of native pyknocytes and donor RBCs reportedly are similar, suggesting an extracorpuscular factor as the cause the hemolysis.2,3 Therefore, Hgb concentration needs to be followed closely until deemed stable.

Our patient was followed up with outpatient serial Hgb tests. He did require one additional transfusion at 3 weeks of age. His Hgb has been stable since then, and he is now 2 years old and healthy.