A mother brought her healthy 8-week-old daughter to a pediatric office for the infant’s 2-month well-baby checkup. The girl had been delivered vaginally at term with no associated complications. She weighed 4.2 kg at presentation, and she had no family history of congenital disease or vascular disease. Physical examination findings were normal.

At the visit, the mother mentioned that she had noticed a prominent, clear discharge from the girl’s right eye for the preceding 2 weeks. A diagnosis of nasolacrimal duct obstruction was considered at the visit, but because of the girl’s constant discharge and parental anxiety, the patient was referred to a pediatric ophthalmologist for further evaluation.

When seen by theophthalmologist 3 weeks later, the infant had developed mild right exophthalmos. Magnetic resonance imaging (MRI) of the brain showed a capillary hemangioma, predominating at the inferolateral aspect of the right orbit, extending superiorly and medially, but not reaching the medial rectus or superior rectus muscles (Figure 1). It abutted the posterior and inferior aspect of the right globe but did not deform it (Figure 2). She was started on propranolol, 3 mg/kg/day initially then tapered to 2 mg/kg/day, with close follow-up. 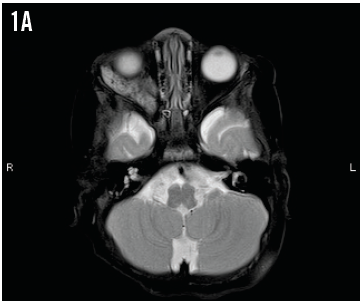 MRI results 2 months later showed a slight reduction in the bulk of the hemangioma (Figure 3). The exophthalmos mass effect related to the lesion on the right globe appeared to have improved after propranolol treatment. Nevertheless, since the MRI results did not show complete remission of the hemangioma, the regimen of propranolol 2 mg/kg/day was resumed. A follow-up MRI scan was to be done in 8 to 12 months.

Infantile hemangiomas are benign vascular tumors characterized by very rapid growth. Capillary hemangiomas are among the most common orbital tumors in children, affecting 1% to 3% of newborns.1-3 Although they are usually self-limited, periocular hemangiomas can cause serious vision loss through the induction of strabismic, deprivational, or anisometropic amblyopia.

The lesions present predominantly in girls and typically appear at birth or within the first 2 months of life. The sites of predilection are the orbit, the eyelids, or both. Pure exophthalmos caused by a deep orbital tumor without an anterior component, as in our patient’s case, is relatively rare, occurring in as few as 9% of all periorbital hemangioma cases.4

A 2004 survey of members of American Association of Pediatric Ophthalmology and Strabismus showed that intralesional corticosteroid injection was the most commonly used treatment for periorbital capillary hemangiomas.5 Oral corticosteroids and excision also are common treatments for these periocular lesions.5-10

Surgical resection is reserved for severe cases,4,11-13 especially when the lesion is growing rapidly or is causing astigmatism, anisometropic amblyopia, or obscuration of the visual axis.2,14 The surgery should be performed at 13 months of age or earlier to reduce the amount of astigmatism. Surgical resection has been found to be very useful in relieving pupillary occlusion.15

The use of alternative therapies such as the interferons has been reported in select cases of periocular capillary hemangioma, especially in cases of life- or sight-threatening complications.3 A combination of low-dose cyclophosphamide with interferon alfa-2a for a short time induced early and lasting regression of orbital juvenile capillary hemangiomas with minimal side effects in one case series study.16 All of these treatments could have severe adverse effects or complications. 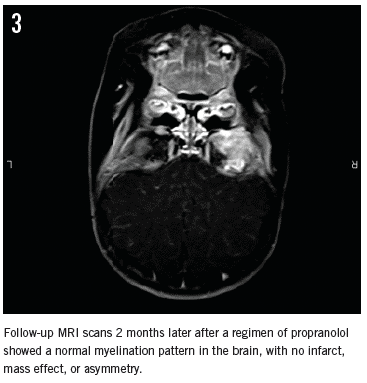 In 2008, Léauté-Labrèze and Taïeb reported that some patients being treated with β-blockers for cardiac indications had an incidental finding of rapid regression of their hemangiomas.17 Since then, increasing use of β-blockers in the treatment of capillary hemangiomas has been reported.18-24 One retrospective observational case series25 showed an average of 7.1 months of oral propranolol treatment of 5 patients with infantile hemangioma significantly reduced the size of the hemangioma in 4 of the patients without significant adverse events. Other authors have reported similar results.26,27

Some authors have proposed the use propranolol as first-line therapy for severe periocular hemangiomas instead of traditional corticosteroid treatment.28 A 2011 comprehensive review29 showed that propranolol had been used as first-line treatment in 50 of 85 cases, with the most common dosage being 2 mg/kg/day. Minor adverse reactions such as bradycardia occurred in one-third of cases. Recurrence was observed in one-fifth of cases. Topical application of a β-blocker such as timolol, 0.5%, also has been shown to be effective.30,31

Ultrasonography and color Doppler imaging are useful modalities in the diagnosis of intraorbital and periorbital hemangiomas.32 However, MRI is a more important and complementary study for the delineation and diagnosis of malformations.33 In addition, MRI is very helpful for choosing the appropriate clinical approach (oral medication, local injection, or surgery) and follow-up.34

Wang Li, MD, PhD, is chief resident in the Department of Family and Community Medicine at the School of Medicine at Texas Tech University Health Sciences Center at the Permian Basin in Odessa, Texas.

Bhargavi B. Kola, MD, is the assistant medical director and an assistant professor in the Department of at the School of Medicine at Texas Tech University Health Sciences Center at the Permian Basin in Odessa, Texas.

Bhavana Y. Mocherla, MD, is a resident in the Department of Family and Community Medicine at the School of Medicine at Texas Tech University Health Sciences Center at the Permian Basin in Odessa, Texas.

George Rodenko, MD, is a radiologist in the Department of Radiology at Medical Center Hospital in Odessa, Texas.