A 3-week-old girl was brought to the clinic for a first visit. Her parents were concerned about a rapidly growing red mass over the right side of the newborn’s face, which had been first noticed at 3 days of age. 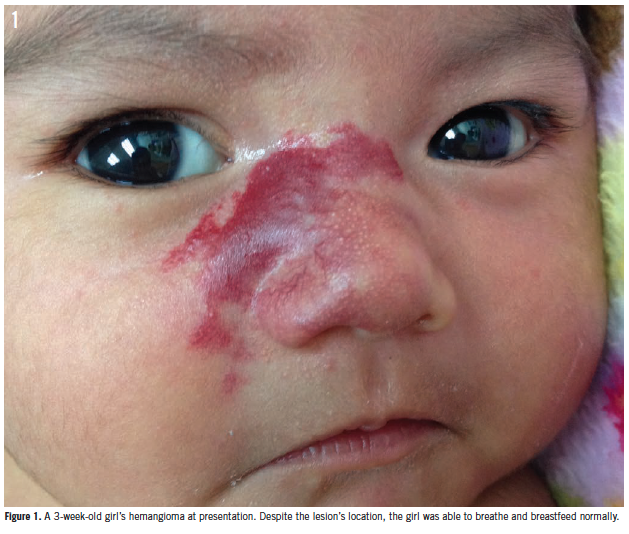 The patient had been born at term following an uncomplicated pregnancy and had had an unremarkable nursery stay.

Physical examination showed a 35 × 25-mm, red, slightly elevated, polycyclic nodule located over the right side of the girl’s face and across the nasal bridge (Figure 1). Both nostrils were patent, and the child was able to breathe and breastfeed normally. The remainder of the physical examination findings were normal.

The lesion was identified as an infantile hemangioma. Given the location and the potential for further growth and expansion toward the eyes and upper airways, the patient was referred to the pediatric dermatology department for further assessment and management.

Two weeks later, the parents brought the girl back to the clinic for a reassessment. Significant interval growth was noted: The mass now was almost 40 mm in size (Figure 2), with slight compression of the right nostril and associated noisy breathing. The mass also appeared very close to the medial canthus of the right eye. The patient was seen in the dermatology office the next day, and treatment was initiated.

Hemangiomas are common vascular tumors in early childhood, with an occurrence rate of 5% to 10% by the end of first year of life.1 They most commonly are observed in premature infants, in girls, and in white children. Hemangiomas usually develop after birth (infantile hemangiomas) and follow a course of growth, plateau, and spontaneous regression over a number of years. Sometimes they are present at birth (congenital hemangiomas); these lesions may spontaneously improve or may remain unchanged over time.2 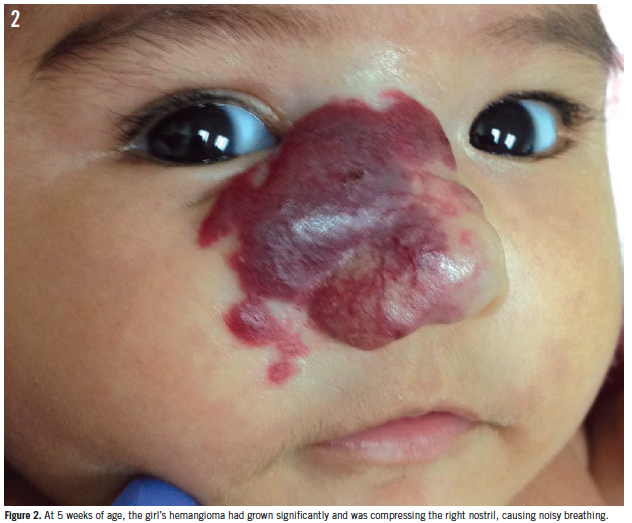 The treatment of hemangiomas depends on the type of hemangioma; the location, extent, number, and distribution of the lesion (ie, segmental or nonsegmental); whether there is systemic involvement; and the presence or absence of ulcerations and psychosocial distress.2 Lesions with the potential for functional impairment (eg, ocular, ear, nasal tip, lip, or genital involvement; large, disfiguring facial lesions) or that are life-threatening (eg, airway involvement) constitute approximately 10% to 20% of cases and require immediate intervention.3

Medical treatment often is the first and only step in managing hemangiomas. Systemic corticosteroids had been the main therapeutic intervention in the past, but β-blockers have gained more acceptance in recent years. In March 2014, the U.S. Food and Drug Administration approved the use of oral propranolol for the treatment of infantile hemangiomas.4 Potential adverse effects of the medication include gastrointestinal symptoms, cool extremities, hypotension, reactive airways, bradycardia, and hypoglycemia.2 Topical β-blockers (eg, timolol) also may be an effective alternative. 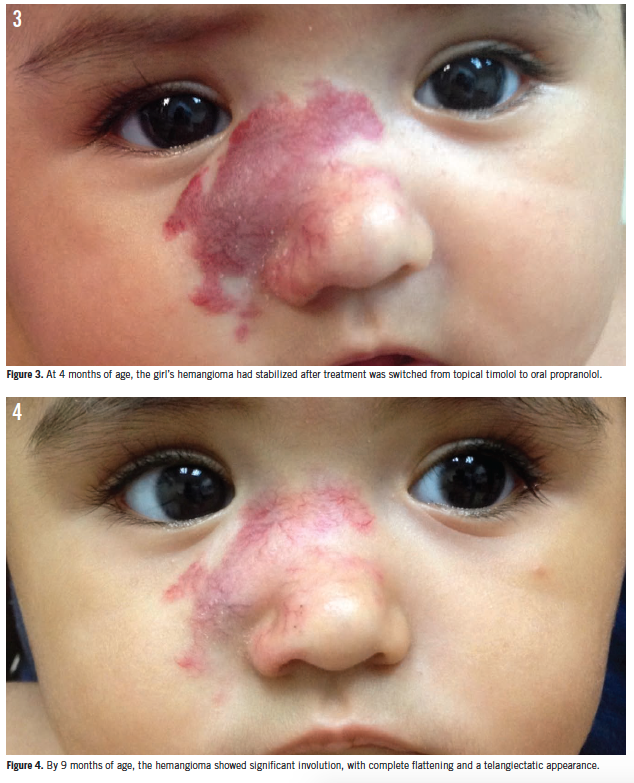 Pulsed dye laser treatments can be effective in the early stages of hemangiomas or as complementary treatment to medical interventions to remove telangiectasias or to smooth irregularities.2 Surgical intervention during the proliferative stage usually is reserved for symptoms (eg, bleeding, amblyopia) that are not controllable by other means, or in certain anatomic locations (eg, large scalp lesions).2

Our patient initially had been started on a topical timolol gel. No significant changes were noted several weeks later, and she was switched to oral propranolol in 3 divided daily doses. The results of a workup for PHACES syndrome were negative.

At her 4-month-old well-child visit to our clinic, the girl’s hemangioma was noted to be stable (Figure 3). At her most recent visit, her 9-month-old well-child visit, significant involution was noted, with complete flattening of the lesion and a rather telangiectatic appearance (Figure 4). The girl continues to take propranolol every day. Except for intermittent episodes of diarrhea, she tolerates the medication very well.

Daniel L. Ivan, MD, is an assistant clinical professor in the Department of Pediatrics, Division of Community and General Pediatrics, at the University of Texas Health Science Center at Houston.