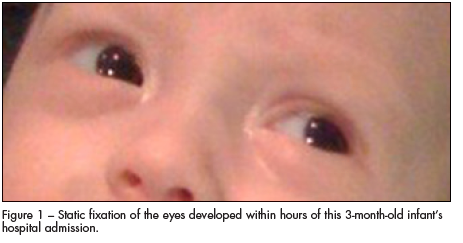 A 3-month-old boy was transferred from a local emergency department with a diagnosis of acute gastroenteritis and mild dehydration after failing an oral fluid challenge. For the past day, he had fever (maximum temperature, 38.8ºC [102ºF]), vomiting, and fussiness. Examination revealed a dehydrated infant with oral thrush, a soft anterior fontanel, and no rash or neurological deficits. 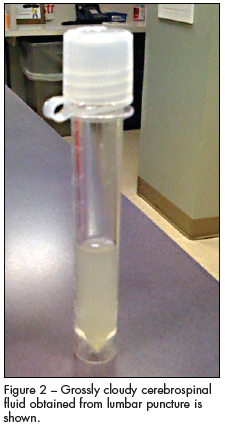 The boy, one of twins, was born at 33 weeks’ gestation and had a 3-week stay in the neonatal ICU. His development had been appropriate.

Within hours of admission, the infant’s gaze had fixated toward the left side with minimal movement (Figure 1). An emergent CT scan was normal. Intravenous ceftriaxone was started. A lumbar puncture yielded grossly cloudy cerebrospinal fluid (CSF) (Figure 2). The CSF gram stain revealed gram-negative diplococci (Figure 3), ß-lactamase-negative. The child was transferred to the pediatric ICU.

The child appeared to improve clinically, until day 3 when seizures began. Repeated CT studies showed nonenhancing lesions at the basal ganglia/internal capsule area, with the largest lesion on the right side posteriorly in the basal ganglia region measuring about 5.5 to 6 mm (Figure 4). A left frontal subdural empyema and extra-axial fluid collection (Figure 5) prompted a frontal craniotomy for evacuation.

The child’s seizures were controlled with phenobarbital. Cranioplasty with insertion of a posterior parietal ventriculoperitoneal shunt was performed because of mild hydrocephalus. During his pediatric ICU stay, he was unable to take food orally and fed through a Dobhoff tube. He was initially treated with ceftriaxone, vancomycin, and acyclovir and switched to penicillin when culture results were available.

At discharge, the infant’s treatment consisted of phenobarbital and metoclopramide injection, and he was fed by mouth. Follow-up was arranged with neurology, neurosurgery, and the primary care physician. 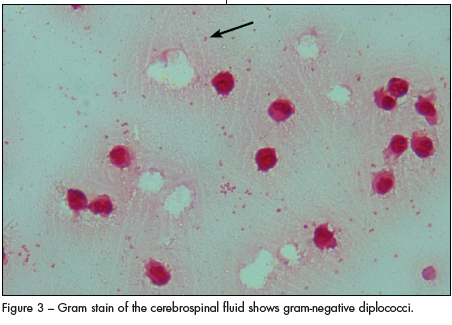 Meningococcal meningitis is a serious disease with devastating long-term effects and a very high rate of morbidity and mortality.1 The disease usually affects infants older than 2 months but younger than 10 years; its incidence has 2 peaks, the first occurs in children younger than 1 year and the second in teenagers aged 15 to 18 years.2 Of all cases of meningococcal meningitis, 24% occur in persons aged 18 to 24 years.

The average yearly incidence of the disease has been decreasing to less than 1 per 100,000 cases among patients older than 1 year. The CDC reported 1172 cases of meningococcal disease in the United States in 2008 and 980 cases in 2009.3,4 The area with the highest number of cases is sub-Saharan Africa, known as the “meningitis belt,” which extends from Senegal in the west to Ethiopia in the east.5

N meningitidis is a gram-negative, kidney bean–shaped diplococcus, with at least 13 serogroups. The bacterium has a large polysaccharide capsule with the ability to perform capsular switching that may permit immunologic escape. The outer membrane lipooligosaccharide (endotoxin) plays an important role in epithelial cell interaction and the pro-inflammatory response.6 Serogroups A, B, C, W-135, X, and Y cause most human disease.7 Serogroups B, C, and Y each account for about 30% of cases.2 In infants, serogroup B causes about 50% of the cases.3

Nasopharyngeal carriage is estimated in 5% to 20% of the general population.6 The bacteria is transmitted via airborne droplets of respiratory or throat secretions from carriers and requires close contact. The incubation period is usually less than 4 days (range, 1 to 10 days). 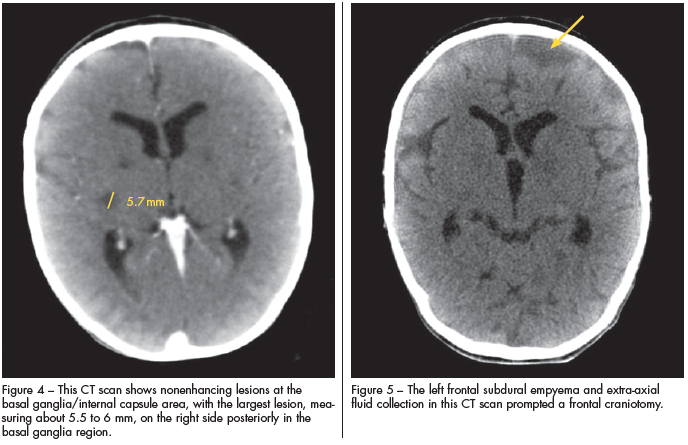 Risk factors. Risk factors can be divided into host and environmental.Host factors include immunosuppression, deficiency of terminal complement components C5 to C9, C3 or properdin deficiency, anatomic or functional asplenia, hypogammaglobulinemia, HIV infection, and recent viral infection (such as influenza).

Close contact, such as kissing and sharing toothbrushes or eating utensils, with an infected patient
increases the risk of acquiring the disease by 500- to 800-fold. Other environmental factors include low socioeconomic status, crowded living conditions, and being part of an ethnic minority group. Passive and active cigarette smoking is associated with increased risk, especially in college students. The risk in exposed health care workers is increased in those who have had contact with the patient’s secretions during unprotected intubation or mouth-to-mouth resuscitation.2,6,7

Challenges in diagnosis. The diagnosis is often delayed because of nonspecific symptoms within the first 4 to 6 hours. The first symptom in children younger than 5 years is usually fever, and in adolescents it is headache. Loss of appetite, nausea, and vomiting are early features for all age groups. The median time for the classic rash or neck stiffness to appear is about 12 to 15 hours.
However, the classic meningeal features—Kernig sign, Brudzinski sign, and fever—may be absent in neonates and small infants. A macular morbilliform rash with hemorrhage is present in 42.3% to 69.8% of cases.6,8

Disease consequences. Acute effects of meningococcal meningitis include damage to specific areas of the brain, with abscesses and seizures, as in our patient. This may be complicated by septicemia, which can manifest as circulatory failure and septic shock and can lead to organ damage, loss of limbs, and skin necrosis.9

Management. The drug of choice is penicillin G given intravenously (250,000 to 300,000 units/kg/d, divided every 4 to 6 hours, maximum 12 million units per day.2 Alternatives include third-generation cephalosporins. In patients with serious penicillin allergies characterized by anaphylaxis, chloramphenicol is preferred.2 The recommended duration of treatment is 5 to 7 days.2 Infected persons are considered noncontagious after 24 hours of appropriate antimicrobial therapy.2

Chemoprophylaxis is needed for anyone in direct exposure to the patient’s oral secretions. During the 7 days before disease onset, prophylaxis should be considered for child care and nursery school contacts and medical personnel at high risk. Airplane passengers seated directly next to the patient are considered at high risk if the flight lasted more than 8 hours. Other contacts outside the above categories are classified as low risk; no prophylaxis is warranted, but close observation is recommended.2

To control outbreaks, it is advised to give children older than 2 years the tetravalent meningococcal vaccine. This is given in adjunct to the chemoprophylaxis. This is important because secondary cases can occur weeks after the onset of the index case.2

Prognosis. Patient age greatly affects disease outcomes. Although the attack rate is highest for children younger than 1 year, the mortality rate for children older than 11 years is higher-—21.2% compared with 4.8% in the younger group. This highlights the importance of early diagnosis and treatment.2,11 Favorable prognostic factors include the absence of coma, hypotension, leukopenia, and thrombocytopenia.

From initial diagnosis to management and prophylaxis, meningococcal disease presents a daunting challenge to the physician. Our role as public health care defenders in leading community efforts for prevention of outbreaks cannot be overstated. The meningococcal vaccine now offered covers 4 (A, C, Y, and W-135) of the 6 major serogroups. The CDC currently recommends the vaccine for children aged 11 to 12 years and high-risk groups, such as unvaccinated college students.2 By encouraging vaccination, we may help prevent the occurrence of cases, such as the one described here.