An Infant With a Flattened Area on His Skull: Benign or Concerning?

This 5-month-old boy was born to a gravida 2, para 1, 26-year-old mother at term via normal spontaneous vaginal delivery. The pregnancy was uncomplicated, and the mother was not on any medication.

At birth, the boy’s weight was 2.8 kg, his length was 51 cm, and his head circumference was 35 cm. There was no history of birth trauma. The neonatal course was uneventful. He was growing well and thriving, and the developmental milestones were normal. His mother brought him in for a regular physical examination with no health concerns.

Physical examination showed mild flattening of the left occiput. The rest of the physical examination findings were unremarkable. In particular, there was no palpable sternocleidomastoid tumor, prominent skull ridge, ipsilateral ear displacement, or frontal bossing. 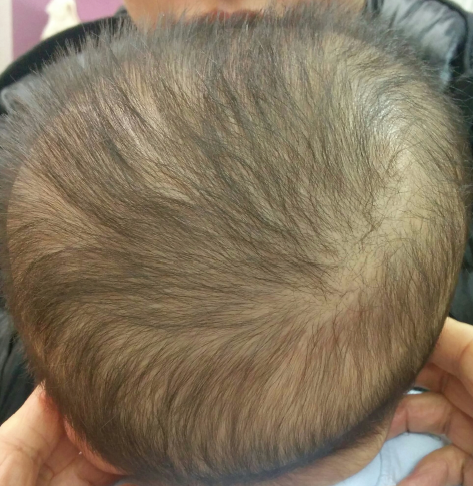 The term plagiocephaly, derived from the Greek plagios (oblique, twisted, or slant) and kephalê (head), means distortion of the head, and refers to cranial asymmetry.1 Positional plagiocephaly, also known as deformational plagiocephaly or nonsynostotic plagiocephaly, usually presents as unilateral occipital flattening, anterior displacement of the ipsilateral ear, and ipsilateral frontal bossing.2 The condition is due to prolonged external forces, such as intrauterine constraint or invariant sleeping position, shaping the infant’s skull.3

The incidence of positional plagiocephaly had been reported in the past at 1 in 300 live births.4 Following the 1992 recommendation from the American Academy of Pediatrics5 and the 1999 joint statement from the Canadian Paediatric Society, Canadian Institute of Child Health, and the Canadian Foundation for the Study of Infant Deaths6 that healthy infants should be placed in the supine position to sleep (ie, “back to sleep”), the incidence of sudden infant death syndrome was reduced, but a concomitant increase occurred in the incidence of positional plagiocephaly.1

A prospective cohort study of 200 infants born at North Shore Hospital in Auckland, New Zealand, between September 2001 and February 2002 showed that the incidence of positional plagiocephaly was 16.0% at 6 weeks, 19.7% at 4 months, 9.2% at 8 months, 6.8% at 12 months, and 3.3% at 24 months.7 A more recent prospective cohort study of 440 healthy full term infants from 7 to 12 weeks of age who presented at four well-child clinics in Calgary, Canada, from July to September 2010 showed an incidence of 46.6%.8 Approximately 60% of affected infants had mild plagiocephaly.

The incidence peaks between 2 and 4 months and declines slowly thereafter.9

Prenatal, postnatal, and to a lesser extent, perinatal prolonged, external pressures that can mold and ultimately distort the shape of the infant’s skull can cause deformational or positional plagiocephaly. Prenatal causes include uterine compression (eg, compression of the fetal head against a hard pelvic brim, uterine fibroid), intrauterine constraint (eg, multiple pregnancy, large fetal size, oligohydramnios), and extrauterine compression (eg, a space-occupying lesion in the pelvis).3,10 Perinatally, the condition can be caused by prolonged labor with the head resting low in the pelvis, unusual birth position, and assisted vaginal delivery (forceps or vacuum).10,11 Postnatally, positional plagiocephaly can be caused by supine sleeping position, nonvarying nursing habits, nonvarying head position when awake or asleep, and positional preference.12 Premature infants are at increased risk for plagiocephaly, presumably due to limited mobility and/or inadequate bone mineralization of the skull.3,11

Other predisposing factors include the age of the mother (age greater than 35 years), being firstborn, being a boy, bottle feeding, awake “tummy time” less than 3 times a day for 10 to 15 minutes each time, slower motor development, and lower activity level.1,4,11,13,14 Torticollis can predispose a child to positional plagiocephaly as a result of an asymmetric supine resting position, although torticollis more often develops secondary to plagiocephaly.12,15 Excess maternal intake of folic acid is another predisposing factor.12

Children with positional plagiocephaly typically presents with unilateral occipital flattening, anterior displacement of the ipsilateral ear, and ipsilateral frontal bossing.2,9 This configuration, when viewed from above, results in a parallelogram deformity of the head.1,2 The occipital flattening is seen more frequently on the right side.14 The contralateral occiput is round and appears bulging. The ipsilateral palpebral fissure often is vertically elongated, creating the illusion of an overly “open” eye.1,16 The mastoid skull base is symmetrical.16 In more severe cases, the malar bones may be asymmetrical.11 The plagiocephaly usually is not noticeable at birth; the deformity usually develops over subsequent weeks or months.16

Positional plagiocephaly should be differentiated from unilateral lambdoid craniosynostosis, which also can cause ipsilateral occipital flattening.

In lambdoid craniosynostosis, the affected suture has a palpable external ridge, and the ipsilateral ear is located more inferiorly and posteriorly.13,17 In addition, growth restriction of lambdoid suture causes compensatory overgrowth of the remaining patent sutures with resultant bulging of the ipsilateral mastoid skull base, contralateral parietal eminence, and a parallelogram-like shape in the posterior view.17,18 When viewed from above, a lack of ipsilateral frontal bossing results in a trapezoidal skull shape.16 In lambdoid craniosynostosis, the abnormal head shape is usually noticeable at birth.18 In contrast, the occipital deformity in positional plagiocephaly may not be noticeable at birth and typically is noted by parents at 6 to 8 weeks of age.12

The history should include, among other information, maternal health during pregnancy, maternal age, fetal position, gestational age, method of delivery, length of labor, birth weight, onset of plagiocephaly, sleeping position, position of the infant while awake, mode of feeding, and developmental milestones.14

The physical examination should be thorough and must include visual inspection of the skull shape, measurement of head circumference, palpation of fontanelles, palpation of cranial sutures, examination for torticollis, and a neurologic examination.1,14 Measurement of subnasal to ear tragus distance and frontozygomatic to contralateral occipital distance is desirable. A difference in the subnasal to ear tragus distance or frontozygomatic to contralateral occipital distance of 10 mm or more is considered significant.10 Plagiocephaly can be quantified by the use of anthropometric calipers or 3-dimensional photogrammetry.19

The diagnosis usually is clinical, and laboratory investigations usually are not necessary. Plain radiographs of the skull should be considered to rule out craniosynostosis if the clinical examination is equivocal.16,17 When craniosynostosis is suspected, a high-frequency ultrasonogram or a high-resolution, 3-dimensional computed tomography scan of the head should be obtained.16,17

Postnatally acquired positional plagiocephaly can be prevented by alternating the side on which the infant is laid to sleep.10 Infants should experience a variety of positions other than supine while they are awake and supervised.20 Cot adjustments and ensuring that an infant does not remain in the same position in car seats and buggies also may help prevent positional plagiocephaly.18 Breastfeeding may be preventive, because breastfed infants are fed more frequently and thereby repositioned more frequently.16 In addition, breastfed infants are naturally repositioned from side to side with each feed.16 Early parental guidance and educational intervention can reduce the prevalence and severity of positional plagiocephaly.9

Treatment consists of reassurance and education of parents, counterpositioning, physiotherapy if torticollis is involved, and molding devices (orthotic helmets or headbands) for more severe cases.20,21 Parents should be reassured of the benign nature of the condition and that positional plagiocephaly tends to improve or resolve in the majority of infants as they become increasing mobile, and that growth of the brain helps to round the developing skull.3 In addition, hair growth may obscure the cranial asymmetry.3

Counterpositioning involves active repositioning of the infant during sleep and play; this is done to apply pressure to the prominent areas of the skull and to allow the flattened areas of the skull to remodel.20 Thus, the crib should be positioned so that the infant lies on the unaffected side so as to receive auditory and visual stimuli from toys and mobiles in the room.16 During feeding, the infant should be positioned so that the cradling arm removes pressure from the affected side of the skull.16 During waking hours, placing the infant prone for supervised play and increasing the time spent on the tummy (“tummy time”) are helpful.

Physiotherapy is indicated if torticollis is involved.21 Physiotherapy may include stretching of the tight sternocleidomastoid muscle and promotion of a variety of positions to reduce forces on the flattened areas of the skull.

Orthotic helmets or headbands should be considered for infants 6 months of age or older with moderate to severe skull deformity who do not respond to conservative management.3,21,22 The custom molded helmet or headband alleviates pressure on the flattened areas of the occiput and allows the skull to grow faster in the desired directions.12 Orthotic treatment typically requires that the infant wear the device for 23 or more hours a day.4,23 The average length of treatment ranges from 4 to 9 months.16,23 Drawbacks and complications can include malodorous perspiration, inadequate cleaning, poor fit, contact dermatitis, pressure sores, ethanol erythema, skin infection, and local skin irritation.8,23,24 Most reported complications are mild and resolve with temporary discontinuance of the orthotic treatment.24 Studies have shown that orthotic therapy is more effective than repositioning therapy in the treatment of positional plagiocephaly.21,25 Helmet therapy is effective in correcting cranial and midfacial asymmetries as well as malposition of the external ear.26,27 For optimal outcomes, treatment should be initiated before 32 weeks of age, although improvement still can be achieved in infants older than 12 months.28 Best results can be achieved with multidisciplinary management based on the needs of the child and the goals of the family.29

The prognosis is good. The vast majority of positional plagiocephaly cases resolve by 2 years of age with conservative management.13,30

Amy A. M. Leung, OD, is a medical student at the University of Alberta, in Edmonton, Alberta, Canada.

Kam-Lun Ellis Hon, MD, is a professor of pediatrics at the Chinese University of Hong Kong.