An Infant With Fever and Intracranial Hemorrhage: A Puzzling Presentation

A 10-month-old girl with no significant past medical history presented to the emergency department (ED) with a new-onset febrile seizure and no other symptoms. Eight months ago, her family had moved to North Carolina from Saudi Arabia; the parents had documentation only of the girl’s 2-month vaccinations.

In the ED, neurologic examination findings initially were normal, but while there, she experienced another seizure. Results of a complete blood count included a white blood cell (WBC) count of 13,600/µL with normal differential. Her C-reactive protein level was 41.7 mg/L. Lumbar puncture showed her cerebrospinal fluid (CSF) to have no red blood cells (RBCs), 5 WBCs with 96% monocytes and 4% polymorphic neutrophils, a glucose level of 67 mg/dL, and a protein level of 14 mg/dL. Results of a purified protein derivative test were negative for tuberculosis infection.

A head computed tomography scan taken at the time (Figure 1) showed bifrontal parenchymal hemorrhages with likely extra-axial fluid, and subarachnoid hemorrhage with local edema. No fracture and no mass effect were visible.

The girl was started on a regimen of ceftriaxone and vancomycin, but she continued to have fever and had 3 seizures in the following 48 hours, despite negative culture test results. She then was transferred to our center out of concern for persistent illness and the possibility of nonaccidental trauma. 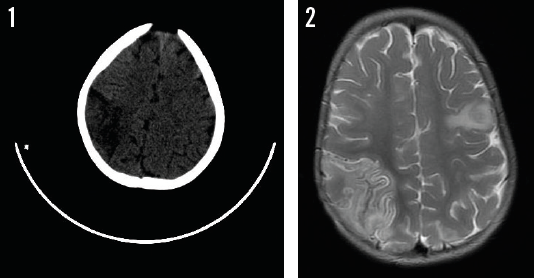 We started the patient on phenobarbital and intravenous acyclovir and repeated a lumbar puncture, the results of which showed 128 RBCs, 43 WBCs with 1% neutrophils, 85% lymphocytes, and 14% monocytes, a glucose level of 57 mg/dL, and protein level of 64 mg/dL. Between seizures, the patient neurologic examination findings were normal, aside from fever. Her father insisted on returning to Saudi Arabia, heightening concern for the possibility of nonaccidental trauma.

What explains the fever, seizures, and intracranial hemorrhage?

After 24 hours at our hospital, the patient defervesced and had no further seizures. The next day, CSF HSV type 1 DNA polymerase chain reaction (PCR) results were positive. She went on to complete 21 days of acyclovir and was discharged home on phenobarbital for 1 year and oral acyclovir for 6 months. Her family moved back to Saudi Arabia, but her parents called 3 months later to report that the child was developing normally, was seizure free, and was taking acyclovir as prescribed.

Early recognition and appropriate treatment of HSV encephalitis (HSE) is imperative, because devastating outcomes and long-term sequelae are common.1 HSE is rare, but 70% of patients or more will die without treatment.1 The classic presentation is acute fever, encephalopathy with behavioral changes, motor deficits, and seizures, but presenting symptoms can vary and often mimic cerebral tumors, metabolic disorders, other infections, or, as in the case described here, nonaccidental trauma.

Even without signs of encephalopathy, HSE merits consideration in all patients presenting with seizure.1 The sensitivity and specificity of HSV DNA PCR testing are greater than 95%, but results may be negative early in the course of the illness, or after 10 days.2 Neuroradiology findings in HSE vary.

Even with early recognition and treatment of HSE, significant morbidity is possible, including microcephaly, hydrocephalus, encephalomalacia, psychomotor retardation, spasticity, hemiparesis, quadriplegia, failure of language development, and blindness. Patients younger than 1 year of age may have more severe outcomes.1

Relapses occur in up to 26% of patients and are more common in children than in adults, with two distinct mechanisms.3 The first, featuring fever and neurologic deficits without extrapyramidal symptoms, may result from a reactivation of viral replication; neuroradiology scans show new necrotic hemorrhagic lesions, and PCR results are recurrently positive. The second, featuring choreoathetosis within the first month following encephalitis onset, likely occurs secondary to HSV infection in the basal ganglia. Acyclovir often fails to improve the movement disorder, and these patients sometimes require corticosteroids.3 Although reports of outcomes in older children are limited, continuing oral acyclovir for up to 2 years in affected neonates may improve neurodevelopmental outcomes.4,5

Rashmi Patel, DO, is chief resident at the Brody School of Medicine at East Carolina University in Greenville, North Carolina.

Jennifer Crotty, MD, is an assistant professor at the Brody School of Medicine at East Carolina University.