Infant and Mother With White Forelocks

Dr Fitzgerald is an intern in the pediatric neurology program and Dr Gourishankar is assistant professor of community and general pediatrics at Children’s Memorial Hermann Hospital and University of Texas Health Science Center at Houston. 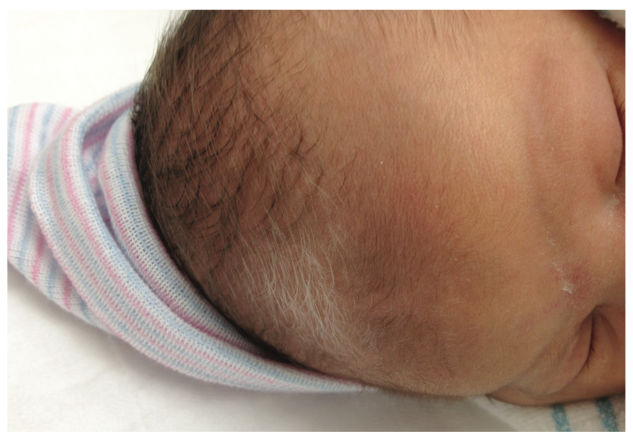 A 2-day-old term Hispanic/Caucasian infant in the well-baby nursery was noted to have a white forelock. Labor and delivery had been unremarkable and remaining physical examination findings were normal.

The patient’s mother had a white forelock as well. She also had other morphological alterations, including widely placed inner canthi and large hypopigmented macules on her abdomen.

•WHAT DIAGNOSIS WOULD YOU SUSPECT?

•IS THE WHITE FORELOCK A BENIGN OR CONCERNING FINDING?

The infant had a strong family history of Waardenburg syndrome (WS) that included an affected mother and the infant’s sibling as well as a maternal aunt, grandmother, and great grandfather.

WS is a rare dominant disorder with incomplete penetrance and variable expressivity that alters neural crest development. The syndrome was first described by the Dutch Ophthalmologist, P. J. Waardenburg, who noted the appearance of 6 distinctive features involving anatomical and pigmentary anomalies of the eye, skin, and hair as well as deafness across family members.1

WS has been classified into 4 subtypes based on an array of clinical features. Diagnosis is made by the presence of 2 major or 1 major and 2 minor features.2

•Hair hypopigmentation, white forelock (poliosis), which occurs in many animal species as well as in humans.

WS affects an estimated 1 in 10,000 to 20,000 persons and accounts for 3% of congenital sensorineural deafness.3 Both sexes are affected equally.

WS type 1 and WS type 3 (Klein-Waardenburg syndrome) are caused by point mutations in PAX3 (chromosomal locus 2q35) and are autosomal dominantly inherited. WS type 1 is characteristic for the presence of dystopia canthorum (in 99% of patients) and less commonly for hearing loss (about 25% of patients).5,6 There is also an association with spina bifida. Cases of WS type 3 may appear sporadically in families with WS type 1 and the presence of musculoskeletal anomalies ranging from minimal contractures of fingers to hypoplasia of upper limbs or pectoral girdle.

WS type 2 is autosomal dominant and genetically heterogenous disorder, with 15% of cases having mutations in MITF.3,5 Clinically, it is more variable in presentation, with frequent absence of dystopia canthorum and higher incidence of sensorineural hearing loss.

The autosomal recessive WS type 4 is associated with Hirschsprung disease (Waardenburg-Shah syndrome). Mutations in SOX10, EDN3, or EDNRB are often present in WS type 4, but it is also genetically heterogeneous.

DIAGNOSIS AND PROGNOSIS IN THIS CASE

Diagnosis of WS type 1 in our patient was made on the basis of the clinical features and strong family history. The mother reported that no members of her family had associated deafness, and the child’s newborn hearing screening was normal. We expect that the condition in this patient will remain benign. n