A 12-year-old girl was seen because she had had a headache for 3 days straight. There was no history of fever, sore throat, earache, or visual aura. She did not have problems with phonation or swallowing. Her past health was unremarkable. In particular, there was no history of surgery in the oral cavity. She had had 2 episodes of otitis media in the past.

During the physical examination, bifurcation of the uvula was noted. The rest of the examination results were normal. 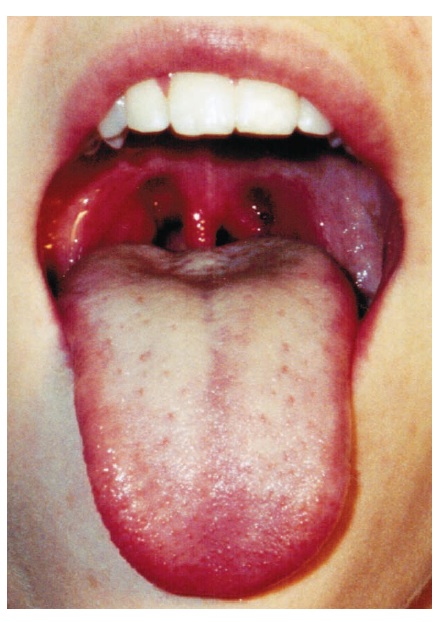 This patient has a bifid uvula, which refers to a partial or total bifurcation of the uvula.

The wide variation in reported prevalence in part might be due to the different diagnostic criteria used, such as some form of uvula cleft versus full-length uvula cleft, as well as accuracy in the detection of small degrees of bifidity.

This benign condition has an autosomal dominant mode of inheritance with incomplete penetration.7 Bifid uvula is more common in males than in females.5,7

The condition results from an incomplete fusion of the uvula during embryonic development.

Physical examination usually reveals a bifurcated uvula or occasionally a stunted uvula. A bifid uvula may not always be apparent on physical examination, because mucous viscosity can hold a bifid uvula together.8 Floating the uvula in normal saline solution may assist in the identification of this anomaly.8 Bifid uvula is a marker for a submucous cleft palate.9 In one study, bifid uvula was present in 60% of patients with submucous cleft palate.10 Bifid uvula may be associated with an absent salpingopharyngeal fold, hypoplastic eustachian tube orifices, and hypoplastic/aplastic musculus uvulae.8

The condition usually is asymptomatic. Some affected patients may have a hypernasal resonant speech.8

Bifid uvula often is an isolated malformation but can be a component manifestation in various genetic syndromes such as Loeys-Dietz syndrome,11 Stickler syndrome,12 Apert syndrome,13 van der Woude syndrome,14 and 22q11.2 deletion syndrome.15

Affected individuals, especially those with associated submucous cleft palate, are at risk for velopharyngeal insufficiency and hypernasal speech.9,16

A bifid uvula is a benign condition. No treatment is necessary. For patients with velopharyngeal insufficiency and hypernasal speech who require adenoidectomy, hypernasality may worsen postoperatively.9

Dr Wong is a clinical assistant professor of family medicine at the University of Calgary. Dr Barankin is medical director and founder of the Toronto Dermatology Centre.