The Importance of Medical Consultation Before Electroconvulsive Therapy

ABSTRACT: Electroconvulsive therapy (ECT) is used mainly to treat severe depression, bipolar disorder, schizophrenia, and a number of other psychotic disorders. ECT is a safe procedure performed under general anesthesia and ordered by a psychiatrist. Medical consultation prior to ECT is indicated for most patients aged 40 years or older and frequently is obtained in younger patients, as well. A history and physical examination should be performed for all patients before they undergo ECT. Laboratory tests such as a complete blood cell count, a comprehensive metabolic panel, and electrocardiography are performed only if required. Cardiology consultation is useful in patients at high risk for cardiac disease. Many psychotropic, cardiac, and antireflux medications may be continued during a course of ECT.

Electroconvulsive therapy (ECT) is the selective passage of an electrical current through the brain, which induces modified seizures to achieve the intended therapeutic purposes.1 Over the decades, the safety and efficacy of ECT have been improved, and its indications have been defined. Today, ECT is used mainly to treat severe depression, bipolar disorder, schizophrenia, schizoaffective disorder, delirium, and neuroleptic malignant syndrome. Compared with medication, ECT can lead to a substantial, effective, and rapid clinical improvement, particularly in the severely ill, elderly, and physically debilitated populations. Modern ECT techniques are performed under general anesthesia and use muscle relaxation.

Psychiatrists usually request medical consultation for preprocedure evaluation to minimize the risk of anesthesia, to recognize the patients with underlying medical risk factors, to adjust medications, and to manage possible postprocedure complications.

This article reviews the mechanism and efficacy of ECT for patients with mental illnesses and the medical management of patients with underlying conditions for whom ECT is being considered.

The use of induced seizures to treat psychiatric disorder began with observations that patients with schizophrenia often improved temporarily after experiencing a spontaneous seizure.2-4 Initially, physicians induced seizures with medications. In 1938, Italian psychiatrists used an electric current to induce seizures as a treatment for schizophrenia.5 The use of ECT quickly spread throughout Europe and the rest of the world.

The use of ECT in the United States has fluctuated.6 Its use declined in the 1970s then subsequently increased, possibly as a result of greater treatment resistance to pharmacotherapy in patients with depression, increased recognition of the limitations of pharmacotherapy, and better public acceptance. A 1988-1989 American Psychiatric Association practice survey estimated that at least 100,000 patients received ECT each year.7 The typical ECT patient today is relatively affluent and receives ECT in a private-sector psychiatric facility.6 Despite the consistent evidence-based effectiveness of ECT, its use has declined dramatically in the United States over the past 15 to 20 years.8

Standard practice in the United States is to administer ECT 3 times per week; however, the routine in many other countries is twice per week,9 and while most patients’ conditions remit with 6 to 12 treatments, but some require only 3, while others require 20 or more.10

The mechanism of action of ECT is unknown, but many changes in the central nervous system have been well documented. Human and animal studies have shown that ECT increases the release of monoamine neurotransmitters, particularly dopamine, serotonin, and norepinephrine. ECT also enhances monoamine transmission by desensitizing presynaptic adrenergic autoreceptors.8,11,12

The neuroendocrine hypothesis suggests that ECT relieves depression by causing the the pituitary gland or the hypothalamus to release hormones, including prolactin, thyrotropin, adrenocorticotropic hormone, and endorphins.10,13 ECT has anticonvulsant properties (that perhaps are related to neurohormones and enhanced γ-aminobutyric acid transmission), which has led to the suggestion that these properties are responsible for the therapeutic effects of the treatment.13,14

The neurotrophic hypothesis suggests that ECT works by increasing neurotrophic signaling and inducing neurogenesis.8,15,16 ECT increases brain-derived neurotrophic factor,16 and electroconvulsive stimulation has been shown to induce neurogenesis and mossy fiber sprouting from granule cells in the hippocampus in a murine model.15 Positron emission tomography studies have demonstrated decreased metabolic activity in the frontal and parietal cortex, the anterior and posterior cingulate gyrus, and the left temporal cortex after ECT.17

Studies using quantitative electroencephalography have demonstrated increased slow (delta) wave activity in the prefrontal cortex after ECT, which is associated with clinical response.21

Medical consultation prior to ECT is indicated for most patients aged 40 years or older, and it is frequently obtained in younger patients, as well. Particular attention should be paid to any history of cardiorespiratory disease, prior surgery, and complications of anesthesia.9

Serum electrolytes tests should be performed in patients who are on diuretics or patients with established kidney disease or congestive heart failure. Electrocardiograms should be obtained for patients older than 50 years.23

Since patients receive general anesthesia for ECT, they should not eat solid food for 6 to 8 hours prior to the procedure and not drink clear liquid for 2 hours prior to procedure, except for necessary medications with a small sip of water. Patients should empty their bladder before treatment.9

ECT is indicated for patients with severe depression after multiple attempts to treat their illness with medications have failed. It also may be used in unipolar major depression and bipolar disorder (Table 1).24

Although the use of significantly advanced technology has made ECT a safe procedure, some patients still are in high-risk groups (Table 2).10 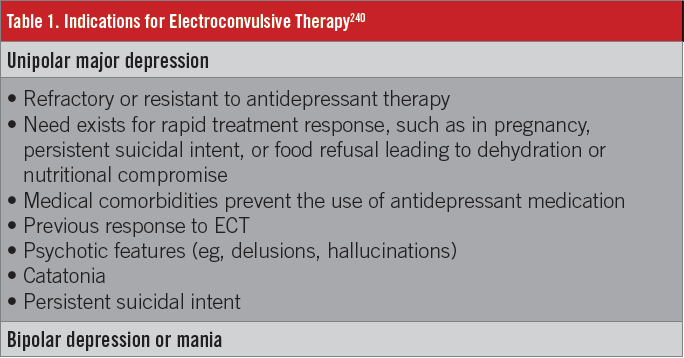 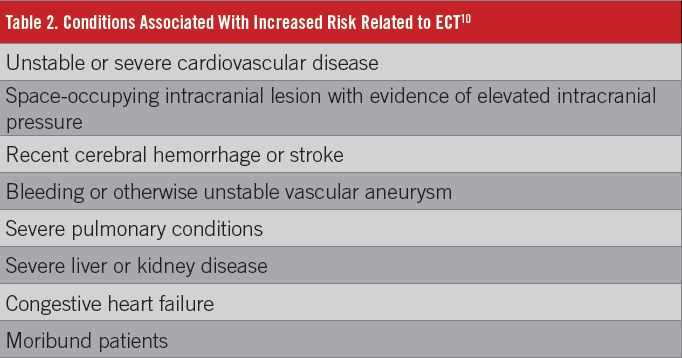 Concurrent medical conditions and their treatments may affect the response to and risks associated with ECT.10

ECT is considered a safe procedure with the help of general anesthesia, muscle relaxants, and cardiopulmonary monitoring. These measures have reduced ECT-related medical complications such as aspiration pneumonia, fractures, dental and tongue injuries, headache, nausea, and myalgia.25-27 The mortality rate of ECT is reported to be 2 to 4 deaths per 100,000 treatments.28,29

Given the possibility of these adverse effects, it is generally suggested that patients refrain from driving for 24 hours after an ECT treatment and that they do not make business or personal decisions for 1 to 2 weeks after completing a course of ECT.29

A number of comorbid neurologic, cardiovascular, and neuromuscular disorders increase the risk of ECT-related adverse effects.

In patients with documented coronary artery disease undergoing ECT, anti-angina medications such as nitrates and β-blockers should continue. Patients on long-acting β-blocker therapy may receive atropine or glycopyrrolate if their risk of experiencing bradycardia is increased.35 ECT should be delayed in patients with decompensated heart failure or significant valvular disease until cleared by a cardiologist. Patients with pacemakers or implantable defibrillators can safely undergo ECT, but the clinical team should be prepared to deactivate pacemakers with a magnet in case any aberrant signals occur.27 Cardiology specialists should deactivate an automatic implantable cardioverter-defibrillator before ECT induction and reactivate the device after the procedure has been completed to avoid possible cardiac complications.

In patients with neuromuscular disorders, short-acting nondepolarizing agents should be used for anesthesia22 due to risk of severe hyperkalemia and circulatory collapse after taking depolarizing muscle relaxants such as succinylcholine.36

ECT is thought to be generally safe during pregnancy by the American Psychiatric Association and the American Congress of Obstetricians and Gynecologists.10,37

There have been reports of successful ECT use in patients with depression and concomitant dementia or organic brain syndrome, with efficacy rates similar to those of patients without dementia.38,39 The severity of delirium following ECT correlates with the degree of underlying dementia or organic brain syndrome, but it is transient and generally does not interfere with treatment.40

The safety of ECT in patients who are on anticoagulants is controversial because of concern about an increased risk of intracerebral hemorrhage.43 However, an internationalized normalized ratio of below 2 on the day of ECT is an appropriate indication for performing the procedure in the absence of any other complications.44

Oral antihyperglycemic agents and short-acting insulin should be withheld the morning of ECT in patients with diabetes.9

Many psychotropic medications may be continued during a course of ECT for their synergetic effect without compromising safety. These include antidepressants, antipsychotics, and lithium.42

Theophylline should be decreased in dosage or discontinued, if possible, because it has been associated with prolonged seizures and status epilepticus.45 Benzodiazepines can interfere with the efficacy of ECT and should be tapered or discontinued during ECT. However, smaller doses may be appropriate. Benzodiazepines (eg, lorazepam, 1 mg sublingual) also can be given 30 to 60 minutes prior to the procedure if the patient is anxious.46 Anticonvulsants may interfere with the efficacy of ECT similarly to benzodiazepines, but patients with epilepsy should continue their anticonvulsant medication during a course of ECT.46

Glucocorticoids and β-adrenergic agonists may be given before ECT for patients with asthma. Patients with gastroesophageal reflux disease should receive their H2 blocker, proton-pump inhibitor, or metoclopramide with a sip of water 2 hours before ECT.