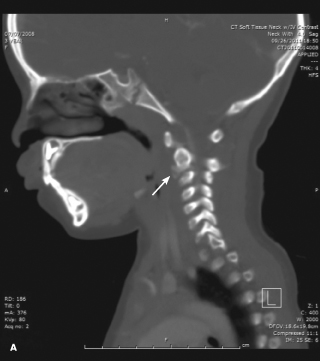 For the past 4 days, a 3-year-old African American girl had neck stiffness. She also had rhinorrhea and cough. The day before presentation, the child had a fever, with a temperature up to 38.2ºC (100.7ºF), and was taken to the emergency department. An upper respiratory tract infection with reactive cervical lymphadenopathy and mild voluntary torticollis were diagnosed, and the patient was sent home. The mother was advised to give NSAIDs as needed and follow up with the primary care physician the next day. At follow-up in the clinic, the child’s neck pain had remained unchanged.

The patient’s past medical history included premature birth at 25 weeks’ gestation, zone 2 stage 2 retinopathy of prematurity, and spontaneous bowel perforation possibly secondary to treatment with NSAIDs for patent ductus arteriosus. At 9 months of age, she was noted to have increased tone in the trunk and upper extremities with persistent asymmetrical tonic neck reflex. A developmental assessment at that time showed marginal delay, and she was referred to an early intervention program.

She also had exercise-induced asthma, which was treated with albuterol as needed. Her immunizations were up-to-date.

The child was active and well-appearing. Her weight was 16.5 kg (90th percentile) and height was 99.5 cm (90th percentile), with a body mass index of 16.7 (75th to 85th percentile). Vital signs were normal. Left-sided torticollis with limited extension of the neck prevented her from achieving an upward gaze. Other findings included increased tone in the upper and lower extremities with persistent toe walking. She resisted placement in the supine position and reported pain with palpation of the lateral aspect of the left side of her neck. Remaining examination findings, including neurological findings, were normal.

However, the true incidence may be higher given that many cases are asymptomatic. The condition appears to be more common in males; its onset is typically between ages 5 and 12 years, the mean age of onset is 7 years.1,2 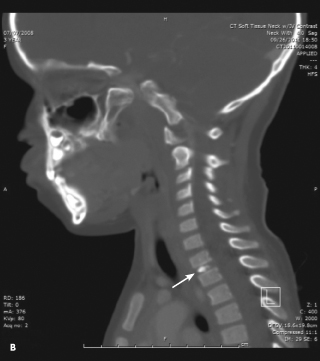 The most common symptom is muscle pain followed by sensorimotor disturbances and fever.1 Severity of symptoms is not associated with extent of radiologic findings.6 Patients may have increased levels of inflammatory markers, with an elevated erythrocyte sedimentation rate being the most common laboratory finding.1

The diagnosis can be made solely on the basis of the radiographic findings. CT or MRI should be considered for patients with abnormal neurological findings.2,3,5,7

Intervertebral disk calcification is generally self-limited, and management typically includes activity restriction and liberal use of NSAIDs, with monitoring for GI adverse effects.1,3-6 About 75% of patients have complete resolution of symptoms within 3 weeks, and 95% are symptom-free 6 months after onset.4 This patient had complete resolution of her symptoms one week after her initial presentation.