A Hypopigmented Patch on a 7-Year-Old’s Back

A 7-year-old boy presented with an asymptomatic light patch on his back that had been first noted in the neonatal period. The patch had been stable in shape, distribution, texture, and relative size since then. He was a product of a nonconsanguineous marriage and an uncomplicated pregnancy. There was no family history of similar or other skin disorders. The child was otherwise healthy. 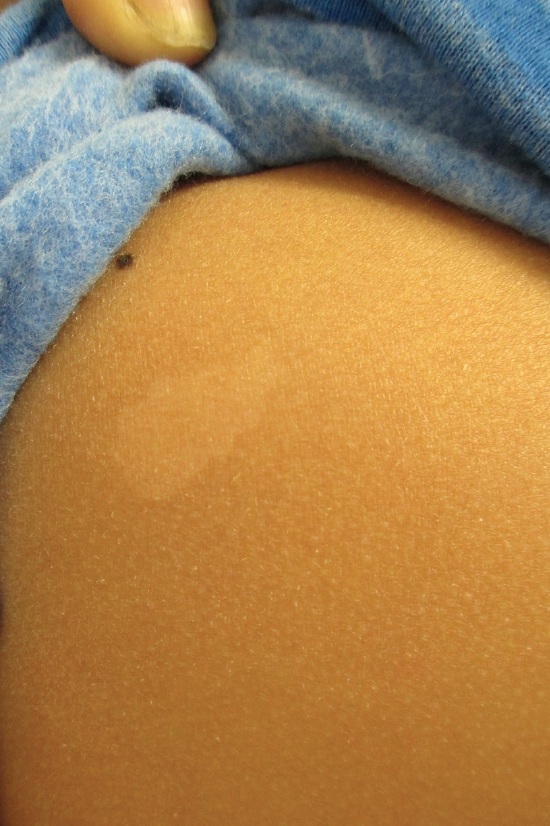 Physical examination revealed a, single, well-defined, hypopigmented patch on the boy’s back. The border of the patch was serrated. The surrounding skin was normal.

Wood lamp examination of the patch showed an off-white accentuation without fluorescence. The rest of the examination findings were unremarkable.

Nevus depigmentosus is characterized by a congenital, asymptomatic, nonprogressive, hypopigmented macule or patch that is stable in shape, distribution, texture, and relative size throughout life.1,2 The condition was first described in 1884 by Lesser.3 The term nevus depigmentosus, however, is a misnomer, because the lesion is hypopigmented but not depigmented.4

The reported prevalence of nevus depigmentosus varies from 0.4% to 3%.5,6 The wide variation in the reported prevalence may be due to the race and age of the studied populations and the diagnostic criteria used for the studies. Although the condition usually is present at birth or shortly thereafter, the hypopigmented area may go unnoticed for the first few months to years, especially in fair-skinned individuals, because the color contrast may not be readily visible in untanned skin. Thus, a low prevalence may result if the study was conducted on fair-skinned individuals in the early months of life. On the other hand, a high prevalence may result if the study was conducted in older, dark-skinned individuals. A high prevalence also might result from misdiagnosis of other hypopigmented lesions as nevus depigmentosus.

The female to male ratio is approximately equal.7,8 The occurrence usually is sporadic, and there is no familial tendency.9

In the majority of cases of nevus depigmentosus, the etiology is not known. There is no known pattern of inheritance.8,9

Histologic examination of a classic lesion shows a marked reduction in the density of melanosomes and some membrane-bound aggregated melanosomes within vacuoles in the keratinocytes.7,11 The number of melanocytes may be reduced.7,11

The hypopigmentation usually appears at birth or shortly thereafter. The lesion is nonprogressive and remains stable in its relative size and distribution throughout life.9 The border of the lesion is not hyperpigmented.12,13 Sites of predilection include the trunk, lower abdomen, and proximal extremities.7 In most patients, the condition is asymptomatic. Three morphologic variants of nevus depigmentosus are recognized: isolated, segmental, and systematized.1,7

An isolated circular or rectangular macule or patch involving a small, localized part of the body is the most common presentation.7 The margin often is serrated. The majority of patients with nevus depigmentosus have one lesion.9 The segmental variant presents as a unilateral streak or patch presenting in a segment or along the lines of Blaschko.1,14 The systematized variant presents with multiple whorls and streaks.1,14 This variant is very rare and may be associated with extracutaneous manifestations such as seizures, mental retardation, hemihypertrophy, and yellow scalp hair.1,7

Wood lamp examination will increase the diagnostic accuracy. With Wood lamp examination, the lesion shows an off-white accentuation without fluorescence.14,15 In addition, dermoscopy, a pigment measuring device, and in vivo reflectance confocal microscopy can be used for the evaluation of the impaired function of melanocytes; the melanin pigment is obviously decreased in lesional skin.15-18 As a research tool, electron microscopy may be useful to demonstrate aggregated melanosomes in keratinocytes and reduction of melanosomes inside the melanocytes in lesional skin.14,17

Congenital causes of depigmentation include piebaldism and Waardenburg syndrome. Piebaldism, an autosomal dominant inherited disorder, is characterized by a white forelock in association with large depigmented patches that are usually polygonal.4 Waardenburg syndrome is an autosomal dominant inherited disorder characterized by a white forelock, piebald macules, lateral displacement of the inner canthi, broad nasal root, heterochromia of the irides, hypertrichosis and fusion of the medial eyebrows, and congenital sensorineural deafness.

Congenital causes of hypopigmentation include albinism, tuberous sclerosis complex, and hypomelanosis of Ito. Albinism, an autosomal recessive disorder, is characterized by a general reduction in skin color due to a defect in the synthesis of melanin.4 Tuberous sclerosis complex is an autosomal dominant inherited disorder characterized by the potential for hamartoma formation in almost every organ. The most common dermatologic manifestations are hypomelanotic macules or “ash leaf spots.”19 Typically, the macules are rounded at one end and tapered at the other. The macules usually are present at birth, and almost all lesions are evident within the first 2 years of life. In newborn infants and fair-skinned individuals, these lesions often are difficult to visualize without the aid of a Wood lamp. The melanosomes are normal but in reduced number and contain less melanin in hypomelanotic macules. Other cutaneous lesions include facial angiofibromas, shagreen patch or “leather” patch, periungual and ungual fibromas, molluscum fibrosum pendulum, café au lait spots, confetti lesions, poliosis, and thumbprint hypopigmented macules.19 The presence of other cutaneous and systemic manifestations confirms the diagnosis of tuberous sclerosis complex.

Nevus anemicus may resemble hypopigmented disorders but differs in that there is no anomaly in the pigmentary system.20 Presumably, the hypopigmented area is due to vasoconstriction as a result of increased local sensitivity of blood vessels to catecholamines.20 Nevus anemicus is a congenital disorder characterized by well defined, hypopigmented, irregularly shaped, confluent macules forming a patch that is usually found on the trunk.20 Smaller satellite macules may extend beyond the borders. Diascopy renders the lesion unrecognizable from its blanched surroundings. Stroking, rubbing, or warming induces erythema of the adjacent normal skin that contrasts with the persistent pallor of the lesion. Wood lamp does not accentuate the lesion.

Nevus depigmentosus also should be differentiated from acquired causes of hypopigmentation. Vitiligo is a common acquired pigmentation disorder characterized by depigmented macules and patches that appear chalk or milk-white in color as a result of loss of functional cutaneous melanocytes.21 Lesions often show homogenous depigmentation and are well demarcated. Lesions often are symmetric and enlarge centrifugally in size with time. The most common location is the face, followed by the neck, lower limbs, trunk, and upper limbs. Vitiligo lesions are well accentuated with obvious fluorescence upon Wood lamp examination.

Pityriasis alba is a common, acquired, nonspecific skin disorder characterized by asymptomatic, hypopigmented, round or oval macules or patches with fine, loosely adherent scales and indistinct margins. The lesions appear mainly on the face, especially the cheeks and upper arms. The condition occurs almost exclusively in children, especially those with darker skin types. Wood lamp examination shows the presence of melanin.

Tinea versicolor, another acquired cause of hypopigmentation, is a superficial skin infection caused by the dimorphic lipid-dependent yeast, Malassezia furfur (formerly called Pityrosporum orbiculare). Lesions present as multiple small, circular macules that enlarge radially. The eruption varies in color from patient to patient, but each person’s lesions are of a single hue. Hyperpigmented red to brown lesions erupt in fair-skinned persons, whereas persons with dark skin tend to have hypopigmented lesions. Wood lamp examination may show yellowish gold fluorescence, although some lesions do not fluoresce. A potassium hydroxide examination of scrapings from lesions reveals numerous short, stubby hyphae intermixed with clusters of spores (the so-called spaghetti and meatballs appearance).

The hypopigmentation usually is permanent and enlarges in proportion with growth in size of the patient. Very rarely, spontaneous resolution has been described.22

Most cases of nevus depigmentosus are asymptomatic, and treatment other than reassurance usually is not required. For patients who insist on treatment for cosmetic reasons, options include use of 308-nm excimer laser, conventional epidermal graft, suction blister graft, or autologous epidermal cellular graft with melanocytes.8,13,23,24 Although repigmentation is possible by the techniques mentioned above, the results are inconsistent, a perfect color match is seldom obtained, and recurrence is possible.8,24 Simple excision, if the lesion is small enough, also can be considered.

Alexander K. C. Leung, MD—Series Editor, is clinical professor of pediatrics at the University of Calgary and pediatric consultant at the Alberta Children’s Hospital in Calgary.