Hypopigmented Lesions on an 11-Year-Old’s Face

An 11-year-old Chinese girl was observed to have hypopigmented macules and patches on her cheeks. The lesions had been first noted 18 months ago. The child was asymptomatic. She had had atopic dermatitis in early childhood. 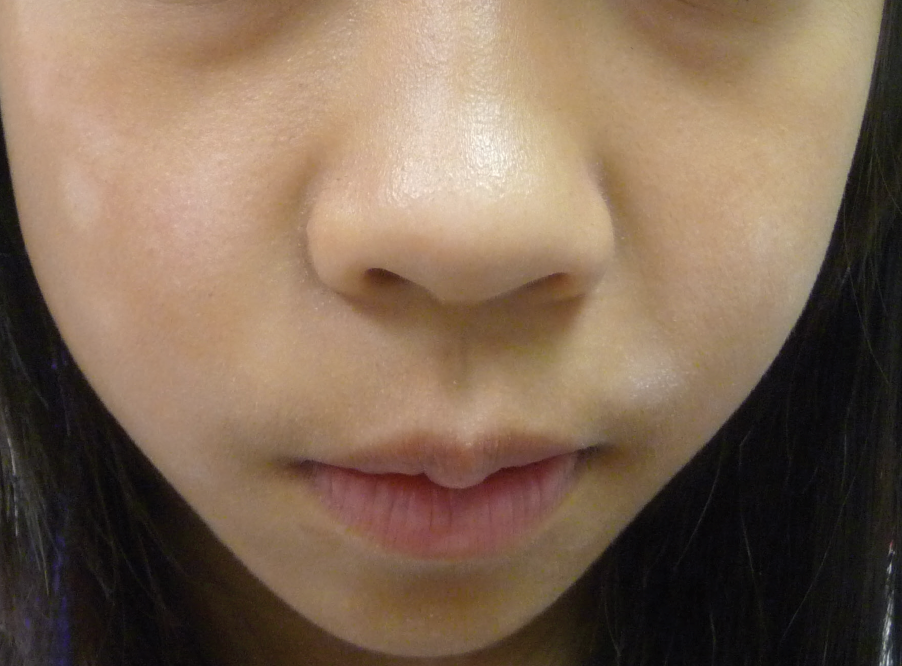 Physical examination revealed hypopigmented, oval macules and patches on the face. The lesions had indistinct margins.

Pityriasis alba is a common nonspecific skin disorder characterized by hypopigmented, round or oval macules or patches with fine, loosely adherent scales and indistinct margins.1-3 The lesions frequently are limited to the face. The condition occurs almost exclusively in children.

Pityriasis alba occurs predominantly in children between the ages of 3 and 16 years.1-3 The sex incidence is approximately equal.4,5 The condition is noted in up to 40% of dark-skinned children and approximately 2% of white children in the susceptible age group.6 In a retrospective study of 5,250 first-time patients (2,491 boys and 2,759 girls) referred to a pediatric dermatology service in Mexico between January 1994 and December 2003, pityriasis alba accounted for 240 (4%) of participants’ 6,029 diagnoses.7 In a study of 113 children (61 boys and 52 girls) attending a dermatology outpatient department in South India from August 2007 to June 2009, pityriasis alba was seen in 28 (24.7%) children.8 Yamamah and colleagues examined 2,194 children (1,123 boys and 1,072 girls) in six different localities within South Sinai, Egypt, from August 2008 to August 2009; pityriasis alba was found in 256 boys and 145 girls for an overall prevalence of 18.3%.9

The exact etiology of pityriasis alba is not known. The condition is observed more commonly in atopic persons and during the spring and summer.1-5 Xerosis is an important pathogenic factor.5,10,11 The hydration state of the affected stratum corneum is lower than that of the surrounding skin.6 Ultraviolet radiation might diminish the number and activity of melanocytes and lead to hypomelanosis.10 Exposure to sunlight or tanning lamps accentuates the condition, because the adjacent skin becomes darker and thereby exacerbates the contrast between normal and lesional skin.11 Microorganisms such as Malassezia (formerly Pityrosporum), Aspergillus, Streptococcus, and Staphylococcus have been considered as possible causes, but none of these microorganisms have been isolated consistently from skin lesions.2,3,5

Histologic features include hyperkeratosis, parakeratosis, mild acanthosis, follicular spongiosis, and exocytosis in the epidermis.5,6,12,13 Ultrastructurally, degenerative changes in melanocytes and a reduced number of melanosomes within keratinocytes are seen.14

Pityriasis alba is characterized by hypopigmented, round or oval macules or patches with fine, loosely adherent scales and indistinct margins.1-4,12 Initially, the lesions are pale and pink. The lesions appear mainly on the face, especially the forehead and malar areas, and occasionally on the shoulders, upper arms, and back.1-4,12 The lesions range from 0.5 to 5 cm in diameter.4,6 Confluent lesions can give the appearance of larger, more amorphous lesions.6 Most lesions are asymptomatic, although some are mildly pruritic.1-4

Pityriasis alba is distinguished from vitiligo by the indistinct margin and the presence of melanin on Wood lamp examination.1-3 Tinea versicolor rarely is found on the face, is uncommon in childhood, and has a distinct margin.2,3 Tinea versicolor can be excluded by the demonstration of the fungus with a potassium hydroxide preparation. The lesion of nummular eczema is usually plaquelike, sharply circumscribed, and more pruritic.2,3 Nevus depigmentosus is characterized by nonprogressive, well-circumscribed macules or patches of hypopigmentation and the appearance before 3 years of age.15 The hypopigmented lesions of tuberous sclerosis usually are present at birth or develop during the first 2 years of life and have the appearance of an “ash leaf.”15 Nevus anemicus can be diagnosed by stroking the affected area, which causes the pale area to become erythematous.15 Postinflammatory, chemical-induced, or drug-induced hypopigmentation usually is evident by history.

The use of moisturizers and sunscreens is advisable.16 If treatment is preferred for cosmetic reasons, repigmentation may be accelerated by the use of a topical calcineurin inhibitor or, less preferably, a mild nonfluorinated topical corticosteroid.2,3,5,16 In a recent study, targeted phototherapy with a 308-nm excimer laser has been shown to be an effective treatment option.12 The most common side effects are erythema and hyperpigmentation localized to the treated area.

The prognosis is excellent. The condition is self-limited and usually lasts 2 to 3 years.1-4 n

Dr Barankin is medical director and founder of the Toronto Dermatology Centre in Toronto.