Dr Adams is clinical associate professor of medicine at the University of Calgary. 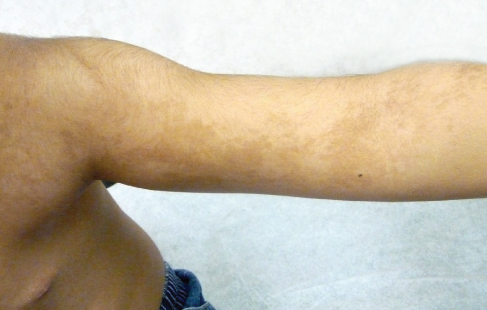 A 4-year-old boy with asymptomatic hyperpigmented lesion on the left shoulder and left arm. The hyperpigmentation was first noted shortly after birth and had progressively enlarged until the child was 3 years old. The lesion has since increased proportional to body size. The child is otherwise healthy and developmentally normal. He takes no medication.

There is no past history of vesicular eruption and no family history of similar skin lesions. Parents are nonconsanguineous.

Both sexes are equally affected.5 The occurrence is usually sporadic although familial cases have also been described.3,6 The exact pathogenesis is unknown. Genetic mosaicism, leading to proliferation and migration of 2 populations of melanocytes with different potential for pigment production, is the most likely cause of this disorder.7

Histopathologic examination shows diffuse increased pigmentation in the basal layer and prominence of melanocytes without incontinence of pigment in the dermis.8

The linear streaks and swirls of macular hyperpigmentation occur in a reticulate pattern without any preceding inflammatory or palpable verruciform
lesions.1,4,8 Sites of predilection include the trunk and extremities. The pigmented streaks follow the lines of Blaschko and display a V-shaped pattern over the spine, an S-shaped or whorled pattern over the anterior and lateral aspects of the trunk, and a linear arrangement over an extremity (as in this patient) or genitalia.4 The palms, soles, scalp, and mucous membranes are typically spared.8

The hyperpigmentation usually appears within a few weeks of birth.1 It tends to progress for 1 to 2 years before stabilization and usually persists indefinitely.1,8

The diagnosis is typically clinical. Dermoscopy can be used to enhance the diagnostic accuracy of pigmented skin lesions.8

The differential diagnosis includes incontinentia pigmenti, hypomelanosis of Ito, and linear epidermal nevus. Incontinentia pigmenti almost always occurs
in girls and is generally fatal in boys; associated defects are present in 80% of patients. The cutaneous manifestations of incontinentia pigmenti usually progress through 4 stages.9 The first phrase presents with erythema, vesicles, and pustules; the second stage with verrucous lesions; the third stage with hyper-pigmented streaks or whorls; and the fourth stage with hypopigmentation, atrophy, and scarring. The hyperpigmentation that characterizes the third stage is present in most patients and usually fades by adolescence.

In hypomelanosis of Ito, the skin lesion consists of seemingly bizarre macular, hypopigmented streaks, stripes, whorls, and patches that conform to the lines
of Blaschko.10 The lesions always involve more than 2 body segments.

There is no effective treatment for this condition. For lesions in cosmetically sensitive areas such as the face, skin camouflage creams are a useful option.