Hyperkalemia in a Woman With Congestive Heart Failure

The patient presents for routine follow-up. At her last visit, she was euvolemic and her CHF symptoms were well controlled.

The patient has hypertension that, until recently, was only variably controlled. Before CHF was diagnosed, her antihypertensive medications were labetalol and a thiazide diuretic. She has a 10-year history of type 2 diabetes, which also was only variably controlled with various oral agents. Metformin and insulin were recently prescribed, and the new regimen has resulted in much better control. She has mild renal insufficiency (serum creatinine level, 2.1 mg/dL), which is assumed to be diabetes-related. She takes acetaminophen regularly to obtain relief from the pain of mild degenerative joint disease in her knees and hips.

The patient weighs 60 kg (132 lb). Blood pressure is 115/80 mm Hg, and the rest of her vital signs are also normal. No neck vein distention is evident. Heart rhythm is regular, with an S4  gallop. No chest rales are audible. Abdominal and neurologic test results are normal. There is a trace of ankle edema.

Hemogram is normal. A random blood glucose level is 162 mg/dL. Sodium, chloride, and bicarbonate levels are normal. However, the potassium level is 5.4 mEq/L, which is elevated from a baseline level of 4 mEq/L obtained 2 weeks earlier.

The ECG reveals evidence of left ventricular hypertrophy and a PR interval of 0.20 second, but no acute changes or injury currents.

See if you are correct >>

Inhibitors of the renin-angiotensin-aldosterone system (RAAS) have become important tools in the management of hypertension, diabetic renal disease, and CHF.1,2 One of the more frequent and important adverse effects of these agents is hyperkalemia, which can occur with or without a concomitant decrease in renal function. The pathophysiology of this effect involves the interplay of 3 mechanisms: decreased distal delivery of sodium, which impairs potassium secretion; reduced aldosterone activity in the collecting duct; and abnormal functioning of the cortical collecting tubule.3 This pathophysiology occurs in about 10% of outpatients treated with drugs that inhibit the RAAS, and it is the cause of hyperkalemia in roughly 25% of patients hospitalized for that condition.

A variety of risk factors for hyperkalemia induced by RAAS inhibitors have been identified; one or more of these are present in the overwhelming majority of patients in whom hyperkalemia develops during treatment with these agents. The risk factors include:

•Preexisting renal disease, especially diabetic renal disease.
•Advanced age.
•Use of drugs that interfere with renal potassium excretion (eg, NSAIDs, triamterene).
•Ingestion of excess potassium, such as occurs with the use of lowsalt diets and salt substitutes. 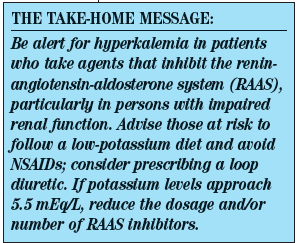 Several of these risk factors are present in this patient: her estimated glomerular filtration rate (GFR) is roughly 30 mL/min, she is older, and she has diabetes. In addition, she now has CHF, which further reduces sodium delivery to the distal nephron and itself predisposes patients to potassium retention. Her recently initiated CHF regimen, which includes enalapril and spironolactone, is certainly reasonable in light of the results of the Randomized Aldactone Evaluation Study (RALES),4 which showed increased survival in patients with severe CHF who received spironolactone in addition to an angiotensin-converting enzyme inhibitor. Moreover, her CHF has responded well to this combination of agents. Nonetheless, the regimen has now resulted in the development of hyperkalemia.

Prevention and management of hyperkalemia. One risk factor seen in many patients in whom hyperkalemia develops is NSAID use. These agents, which are frequently taken as over-the-counter therapy for arthritis, interfere with renal potassium excretion by impairing renin release. They can cause hyperkalemia in a variety of settings in which renal function is impaired.5 In situations in which there is an increased risk of hyperkalemia, avoidance of NSAIDs and substitution of an alternative analgesic, such as acetaminophen, can be helpful. This woman already uses acetaminophen; to advise her to switch to an NSAID (choice C) is clearly inappropriate and, consequently, is the correct answer.

One of the easiest strategies for lowering potassium levels is to change the patient’s diet (choice A). Advise the patient to reduce intake of potassium-rich foods, such as bananas and citrus juices (frequently recommended to and used by patients who take diuretics); to leach high-potassium vegetables before cooking; and especially to avoid potassium-containing salt substitutes.

Diuretics help greatly in the prevention of hyperkalemia. They enhance delivery of sodium to the collecting duct and facilitate potassium excretion once sodium has been reabsorbed. When the estimated GFR approaches 30 mL/min, loop diuretics effect these physiologic processes better than thiazide diuretics. Thus, replacing hydrochlorothiazide with furosemide (choice D) in this woman, who has a significant degree of renal insufficiency, would probably help lower her potassium level.

If other maneuvers fail and the potassium level approaches 5.5 mEq/L, some adjustment in the dosage or number of agents that inhibit the RAAS is indicated. One could argue that the use of these 2 agents in combination represented somewhat aggressive initial treatment in a patient with borderline renal status. Although the data from RALES support this approach, the mean creatinine level in participants in that trial was 1.2 mg/dL. In any event, with the data presented here, most authorities would discontinue either the spironolactone or the enalapril and recheck the potassium level in about a week (choice B).

This patient’s spironolactone dosage is appropriately low (25 mg/d). However, in this setting, enalapril has dual efficacy: it enhances renal function in kidneys weakened by diabetes and hypertension and it improves survival in patients with CHF. Spironolactone, on the other hand, only helps improve survival. Thus, spironolactone is the first choice for discontinuation.

Outcome of this case. The patient was advised to follow a low-potassium diet and avoid salt substitutes. Spironolactone was temporarily discontinued, and furosemide, 40 mg in the morning and 20 mg in the evening, was substituted for hydrochlorothiazide. A week later, she again was essentially euvolemic and her CHF symptoms were well controlled; her serum potassium level was 4.7 mEq/L.  She will be monitored for several more weeks; at that time a decision will be made about whether to reinstitute spironolactone.