ABSTRACT: Hunter syndrome, or mucopolysaccharidosis II, is a genetic disorder caused by a deficiency of iduronate 2-sulfatase (I2S), an enzyme involved in the breakdown of mucopolysaccharides. Insufficient I2S leads to mucopolysaccharides accumulating in the brain, bones, heart, lungs, and visceral organs, which can cause a wide array of adverse physical and mental effects. Timely diagnosis and referral allows for the recognition of at-risk women carriers, the provision of prenatal or preimplantation diagnosis options, anticipation and prevention of related complications, and earlier initiation of enzyme replacement therapy or hematopoietic stem-cell transplantation.

A 2½-year-old boy whose course was being followed for speech delay and mild motor delay came in for a well visit. His motor development milestones had been late-normal, with sitting beginning at 8 months and walking at 16 months. He had begun to speak at 18 months, but he still was saying only a few words.

He was the third child of healthy, nonconsanguineous parents. He had had a normal full-term gestation, an uncomplicated delivery, and a 2-day well-nursery stay. His sister, aged 9, and brother, aged 5, were healthy. His family history was unremarkable except for a maternal uncle with significant delays and an unknown illness whose recent circumstances were unknown.

The pediatrician had noted subtle changes in the boy’s facial appearance (Figure 1) and mild contractures of the fingers. The boy’s past history included an umbilical hernia (Figure 2) and chronic otitis media requiring myringotomy tube insertion and adenoidectomy, with conductive hearing loss. The parents and the pediatrician had agreed to delay subspecialty referral until the effect of restored hearing on the boy’s speech development could be assessed.

The child showed increased subcutaneous tissue in the face that produced a coarse appearance, a feature that is typical of diseases involving the accumulation of partially degraded mucopolysaccharides (MPSs) in tissues as a result of enzyme deficiency.1-4 Early presentation in a boy suggests Hurler syndrome (mucopolysaccharidosis I) or Hunter syndrome (mucopolysaccharidosis II), with the lack of corneal clouding in this boy’s case favoring a diagnosis of Hunter syndrome. The patient’s cousin on his mother’s side (Figure 3) also is likely to have Hunter syndrome, making both mothers and their mother obligate carriers, with a 1 in 4 recurrence risk for each future pregnancy (50% risk if the fetus is known to be male).

Hunter syndrome is an X-linked recessive disorder caused by a deficiency of iduronate 2-sulfatase (I2S) resulting from a mutated I2S gene copy (allele) on the X chromosome. Insufficient I2S levels lead to MPSs accumulating in the brain, bones, heart, lungs, and visceral organs, which can cause developmental plateau and regression; macrocephaly with potential hydrocephalus; a coarsened facial appearance from thickened subcutaneous tissue; visceral enlargement with hepatosplenomegaly (manifested by a protuberant abdomen); skeletal changes with metacarpal and vertebral processes evident on radiographs, and scoliosis with joint contractures.

Boys with Hunter syndrome can have a normal appearance at birth, but MPSs accumulate in their extracellular matrix to produce numerous complications.5-8 The most severe form of Hunter syndrome features neurodegeneration and a limited lifespan, while individuals with a milder, attenuated form have normal intellect and somatic changes.4-6

These 2 types are the poles on a spectrum of disease that manifests physical findings such as rapid, early growth with later growth failure; coarse facial appearance (Figures 4 and 5); congestion with rhinorrhea and respiratory illnesses, including otitis media; gradual hepatosplenomegaly with protuberant abdomen (Figure 6) and frequent umbilical hernia; joint contractures with carpal tunnel syndrome; and, later, skeletal changes with deformities such as kyphoscoliosis, which led to the pejorative term gargoylism for mucopolysaccharidosis disorders (Table).6 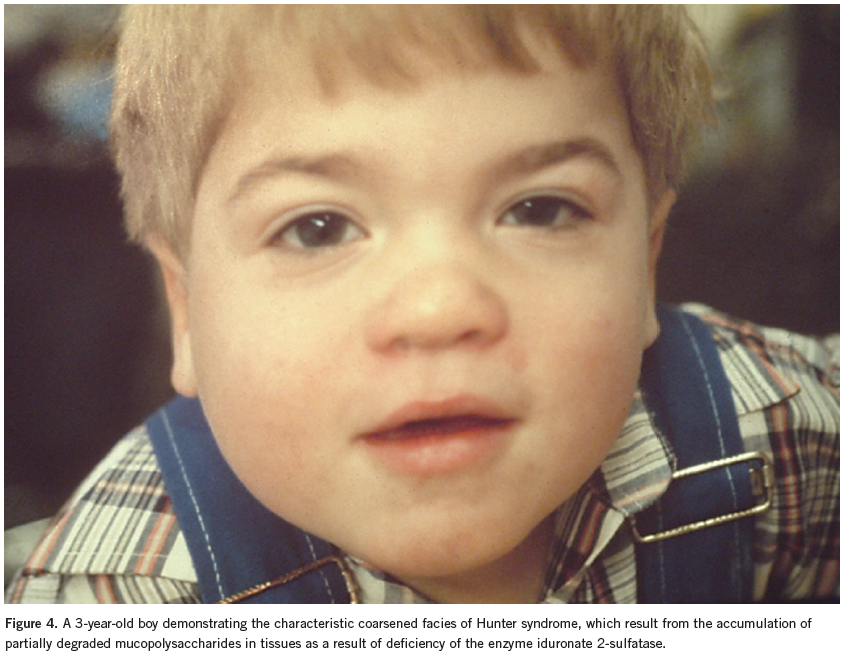 The prevalence of Hunter syndrome is between 1 in 100,000 and 1 in 170,000 births,4 but certain complications confer a much greater likelihood for the diagnosis. The conjunction of umbilical hernia and adenoidectomy/tonsillectomy increases the likelihood of Hunter syndrome in boys some 200- to 300-fold, to 1 in 55.7 Surgery is necessary in 84% of cases, with the first operation occurring at a median age of 2.6 years; most participants (221 of 389) in the Hunter Outcome Survey underwent at least one surgery before receiving a diagnosis of the condition.7 Common surgical interventions include shunting for hydrocephalus, carpal tunnel release, cardiac valve replacement, inguinal hernia repair, and hip replacement.4-8

Timely diagnosis of Hunter syndrome allows for the recognition of at-risk women carriers, the provision of prenatal or preimplantation diagnosis options, anticipation and prevention of related complications, and earlier initiation of enzyme replacement therapy (ERT) or hematopoietic stem-cell transplantation (HSCT).

As with most syndromes, the key to the diagnosis of Hunter syndrome is appreciating that a common pediatric problem such as otitis or hernia is part of a disease complex (syndrome literally means running together). Initial suspicion will lead to quantitative urine testing for MPSs, followed by a leukocyte lysosomal enzyme screen. Persons with Hunter syndrome will have increased urine MPSs and specific I2S deficiency, which differentiates Hunter from other types of mucopolysaccharidosis (eg, Hurler syndrome, Sanfilippo syndrome) or oligosaccharide diseases (eg, mucolipidosis II, GM1 gangliosidosis). 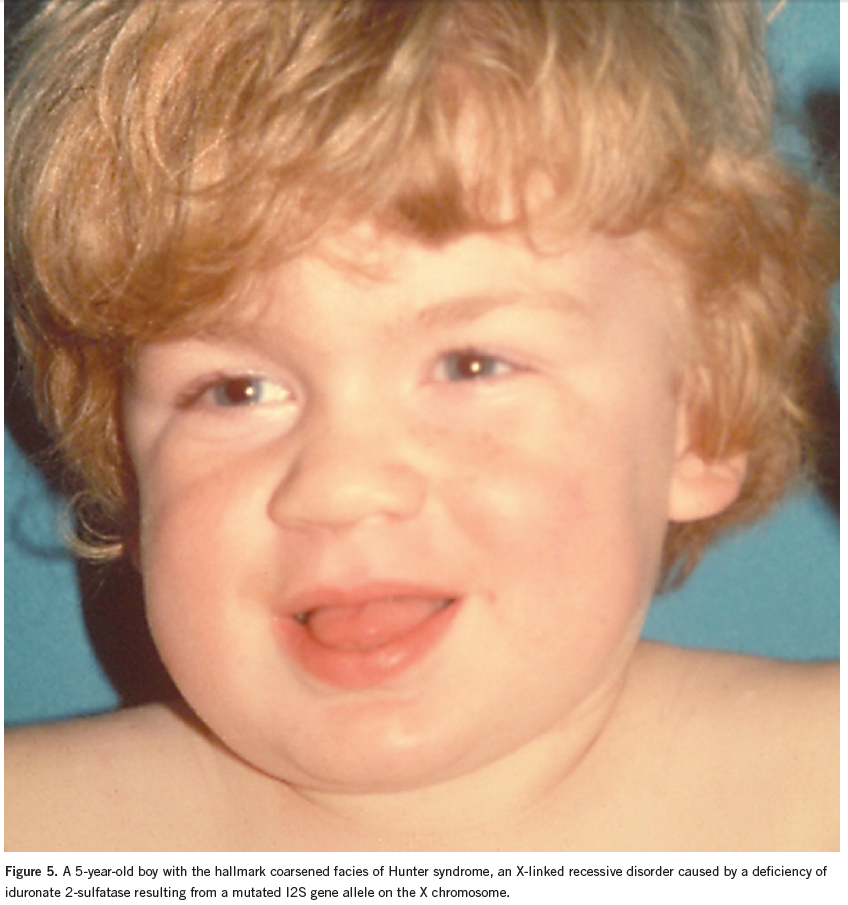 Genetic referral is best to ensure proper testing and interpretation of results, and it ultimately involves DNA analysis for specific mutations in the IDS gene.4 The Hunter IDS gene occupies 24,000 kilobases at band Xq28, with 9 exons being spliced to encode the I2S enzyme protein, which contains 550 amino acids. More than 300 I2S single nucleotide changes have been described—a diversity consistent with a significant frequency of new mutations—and 10% of persons with Hunter syndrome have large gene changes (eg, deletions, recombinations) that usually are associated with severe disease.4

Once the diagnosis is made, preventive management includes referral to early childhood intervention, audiology, and ophthalmology to monitor speech and neurosensory development; baseline cardiology assessment with echocardiogram to assess valvular insufficiencies; pulmonary function tests; and regular pediatric visits to coordinate subspecialty care. Specific tests can include a sleep study to assess for obstructive apnea, ophthalmologic examination to assess for strabismus or retinitis; a nerve conduction study to look for evidence of carpal tunnel syndrome; an orthopedic evaluation to identify hip dysplasia; and magnetic resonance imaging of the head and neck to evaluate ventricle size and cervicomedullary narrowing.4-8

The presence of cervicomedullary narrowing is a complication that mandates care with intubation, because cervicomedullary compression and atlantoaxial instability may be present. The initial diagnosis also mandates a discussion of ERT or HSCT, the latter of which involves umbilical cord blood or bone marrow stem-cell transplantation. 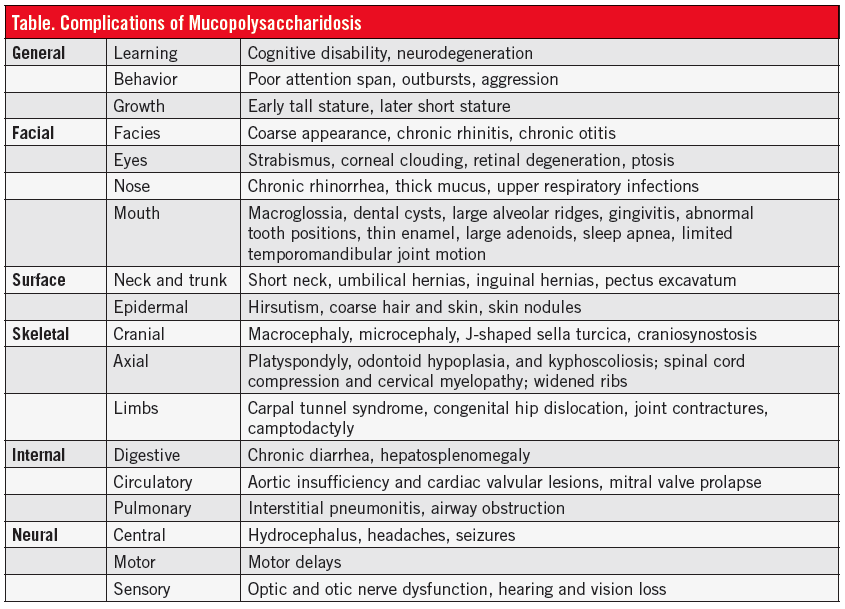 Idursulfase (Elaprase), a form of the I2S enzyme produced by recombinant DNA technology, was approved by the U.S. Food and Drug Administration in 2006.10 Idursulfase has been shown to ameliorate or reverse many of the somatic complications of Hunter syndrome.11-14 Its clinical efficacy was documented in a controlled, double-blind trial enrolling 96 patients with attenuated disease; the results showed improvement in a composite score based on distance walked and pulmonary vital capacity.11 Because the idursulfase molecule is too large to cross the blood-brain barrier, neurologic improvement is neither expected nor observed, and careful risk-benefit discussions are necessary for patients with cognitive impairment.

A consensus recommendation based on experience with 66 severely affected patients suggested a 1-year trial of ERT, since most of the patients had a reduction in liver size, increased mobility, and a reduction in frequency of respiratory tract infections.12 The panel excluded severely impaired, vegetative, or terminally ill patients from this recommendation and emphasized the need for thorough physician-parent discussion, including realistic risks and benefits and agreement that ERT is to be discontinued in the absence of obvious benefit.12

Clinical trials demonstrated that weekly infusion of idursulfase was the more effective dosage, and agreement on a dose of 0.5 mg/kg was reached in the United States and Europe. Infusion-related reactions are similar to those accompanying other lysosomal replacement enzymes or monoclonal antibody therapies, with severe anaphylaxis having unknown but presumed rare frequency.4 Usual symptoms are mild changes in heart rate, blood pressure, or respiratory rate, as well as pruritus, rashes, flushes, or headaches, all of which often can be controlled by decreasing infusion rates. Pretreatment with diphenhydramine or ibuprofen sometimes can diminish such reactions, although this use is off-label; pretreatments usually become unnecessary after 6 to 10 weeks.4

A meta-analysis review13 agreed that idursulfase was effective, but it found only one study11 that met the criteria for controlled trials. The authors felt that the limited data did not demonstrate improvement in outcomes, such as growth, sleep apnea, cardiac function, or quality of life.

Several studies in specific populations have documented improved quality of life with both ERT and HSCT, with earlier diagnosis and therapy yielding better outcomes; HSCT led to slightly better outcomes for patients with severe Hunter syndrome.14 The significant morbidity and mortality associated with HSCT has limited use of the therapy, particularly because cognitive function is not improved. Methods for delivery of recombinant lysosomal enzymes into cisternal or ventricular cerebrospinal fluid are being developed.15

Golder N. Wilson MD, PhD, is a clinical professor of pediatrics at Texas Tech University Health Sciences Center in Lubbock and a geneticist at KinderGenome Pediatric Genetics in Dallas.