How Would You Treat This Patient’s Unusual Urinary Tract Infection?

His vital signs included a blood pressure of 156/79 mm Hg, a heart rate of 92 beats/min, a respiratory rate of 36 breaths/min, a temperature of 36.0°C, and oxygen saturation of 96% on room air. Abdominal examination revealed suprapubic tenderness without rebound tenderness or guarding. Urinalysis results were suggestive of urinary tract infection. Computed tomography scans of the abdomen/pelvis were obtained (Figures 1 and 2). 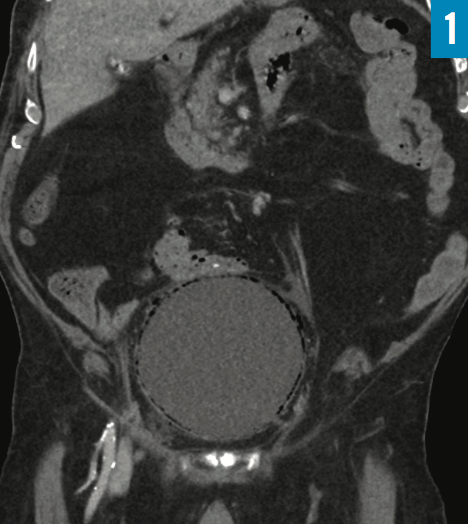 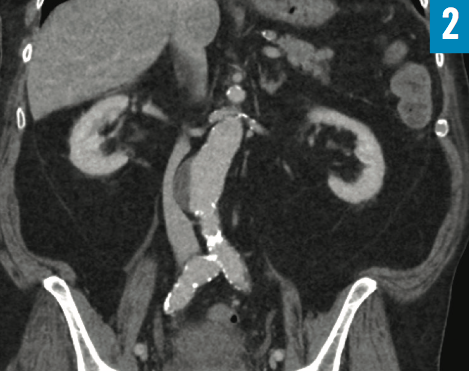 Computed tomography (CT) scans of the abdomen/pelvis revealed that the bladder was distended to approximately 10 × 5 cm despite the presence of an indwelling catheter within it. Nondependent layering of gas was found within the bladder wall (Figure 1). The kidneys appeared atrophic bilaterally. No other gas was noted (Figure 2). Calcified and noncalcified plaques were noted incidentally, along with infrarenal aneurysmal changes in the abdominal aorta.

Based on the patient's clinical presentation and the CT findings, he received a diagnosis of emphysematous cystitis (EC) without emphysematous pyelonephritis (EPN) associated with an occluded indwelling urinary catheter. His condition was managed with a urinary catheter exchange and a 14-day course of intravenous piperacillin-tazobactam. Urine culture was positive for Escherichia coli. A consulting urologist advised continuation of antibiotic management only with close monitoring of the patient's condition. Although the patient fully recovered from the UTI after completing the antibiotic regimen, he later developed another UTI, with Pseudomonas aeruginosa as the culprit, and died as a result of this infection.

DISCUSSION
Air within the urinary tract can occur as a result of instrumentation, fistula, tissue infarction, or infection. Gas-forming infections of the urinary tract such as EC and EPN are uncommon but are potentially life threatening and require prompt evaluation and management. EC is a lower UTI characterized by the presence of air within the bladder wall and lumen, whereas EPN is an acute, severe, necrotizing infection of the renal parenchyma and perirenal tissue, which results in the presence of gas within the renal parenchyma, collecting system, or perinephric tissue. EPN is a medical and surgical emergency, the standard treatment of which is emergent nephrectomy and/or open surgical drainage along with antibiotic therapy, with a reported mortality rate of 40% to 50%.1 Major risk factors associated with the development of EPN include diabetes and urinary tract obstruction.1

EC occurs much less commonly than EPN and has a lower mortality rate.2-4 Schicho and colleagues analyzed the 136 cases of EC reported in the literature between 2007 and 2016.2 The mean age of the patients was 67.9 years. Concurrent emphysematous infections of other organs, most commonly EPN, were present in 15.4% of cases. The primary pathogen was E coli, which was identified in 54.4% of the EC cases. Other reported pathogens in cases of EC include Klebsiella pneumoniae, Enterococcus species, and Candida species. In Schicho and colleagues' analysis, most patients with EC (77%) were treated conservatively with antibiotics, and surgical treatment was required in 8.1%.2 The mortality rate associated with EC was 7.4%.2

In their retrospective review of 28 consecutive cases of emphysematous UTI (15 EC, 13 EPN) over a 5-year period, Bjurlin and colleagues reported that up to 10% of patients with either condition required surgical intervention, including partial or total cystectomy.3 They concluded that patients with EC should be managed with a combination of fluid resuscitation, aggressive antibiotic therapy, correction of reversible precipitating factors, and early indwelling catheter drainage.

Eiyu Matsumoto, MB, is a clinical assistant professor in the Department of Internal Medicine, Division of Infectious Diseases, at the University of Iowa Carver College of Medicine in Iowa City, Iowa.