How Would You Diagnose this Infection?

A 69-year-old white male with a past medical history significant for ulcerative colitis requiring a total colectomy presented with complaints of progressive postprandial abdominal pain over the past 6 months. The pain was described as diffuse and achy, and was not relieved with bowel movements. Eating food exacerbated his pain, while lying supine helped ease it. He related minimal increase in stool production from his ostomy. He had lost about 20 pounds in the past 3 months and denied any bleeding or mucoid ostomy output. He reported no fevers, nausea, vomiting, or pruritus.

His past medical history was significant for diabetes mellitus, hypertension, chronic lower back pain, and a 3.4 cm abdominal aortic aneurysm. His only major surgery was the colectomy. He had a >50 year history of chewing approximately a can of tobacco a day. He denied any alcohol or illicit drug use. He was married and lived on a large ranch working with domestic animals as a horseshoer. He denied any travel history outside the continental United States.

He was a thin, but an active elderly male. No mandibular, axilla, or femoral lymphadenopathy was appreciated. His cardiac and pulmonary examinations were unremarkable. He had a healthy appearing ileostomy in the left lower quadrant and a well-healed midline abdominal scar. The remainder of the abdomen was soft, nontender, and non-distended. He had good peripheral pulses with no lower extremity edema. No skin rashes or lesions were appreciated. 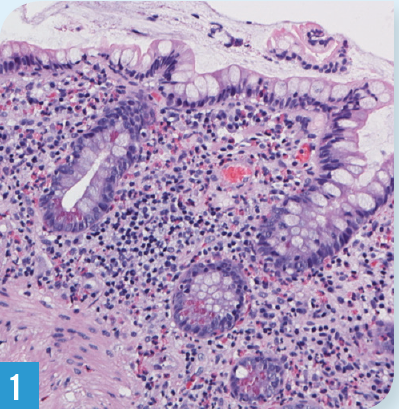 A CT scan and MRI of the abdomen-pelvis showed postsurgical changes with no acute abnormalities. A duplex ultrasound revealed normal pre/postprandial celiac and superior mesenteric blood flow. An upper endoscopy and ileoscopy were reported as grossly normal. Random biopsies of stomach and duodenum were normal, but of the ileum revealed marked eosinophilia (Figure) in the lamina propria, without evidence of cryptitis, abscess, or granuloma.

A history of working with domesticated farm animals with a significant eosinophilia prompted the possible diagnosis of a parasitic infection. Immunoglobulin G (IgG) antibody test for Strongyloides returned positive a few weeks later, confirming the diagnosis.

The lifecycle of the parasite commences when the larvae dormant in contaminated soil enters the host through the skin; walking barefoot is probably the biggest risk factor.3 The larvae ascend to the alveoli via the blood vessels. They then move upwards to the trachea (usually via coughing), where they are swallowed and settle in the host’s small intestines. The females mature here and begin to lay their eggs, which rapidly hatch releasing larval forms into the intestinal lumen. The parasite cleverly establishes a method for endogenous reinfection within the host.1-4

A majority of those infected remain asymptomatic.1-3 Nonetheless, multiple organs can be involved with chronic infection, including the lungs, gastrointestinal tract, and the skin (larva currens). Gastrointestinal symptoms can range from diarrhea to abdominal discomfort; abdominal bloating is the most common complain. Chronic infection has been shown to lead to malabsorption.

Eosinophilia is present in the majority of cases and should raise suspicion of the disease. Hyperinfection, where the parasite increases greatly in number and is spreads to extraintestinal regions, is most commonly seen in immunosuppressed patient (eg, HIV). Hyperinfection has a high mortality rate—as high as 87%.1,2,4

A comprehensive patient history is essential in these cases. Classically, strongyloides can be diagnosed by visualization of the larvae on microscopic stool examination, which requires multiple stool samples. Note: This method is not very reliable as output of larvae could be minimal in majority of cases. An enzyme-linked immunosorbent assay test for detecting IgG antibodies against the parasite is available and has a relatively high specificity and sensitivity, although there can be cross reactivity with other helminthic infections.

Thiabendazole has been used in the past to treat for strongyloidiasis but has a high relapse rate. Mebendazole and albendazole have also been used but with variable efficacy. Ivermectin is the drug of choice for uncomplicated strongyloides infection at a dose of 200 ug/kg for 2 days, and is proven effective in patients of all ages.1-4

Outcome of the case

The patient was immediately started on ivermectin (200 mcg/kg) for 2 consecutive days. Within a week, the patient reported significant improvement in his abdominal pain and by week 3, he had resolution of all his symptoms. His repeat ESR, CRP and eosinophilia 1 month later were trending toward normalcy.