How Can You Explain This Patient’s Thrombocytopenia During Hemodialysis?

A 44-year old male with history of chronic hypertension presented with 1-month history of nausea, fatigue, and decreased appetite.

The patient had a blood pressure of 198/116 mm Hg, a heart rate of 91 beats per minute, a respiratory rate of 14 breaths per minute, and an oral temperature of 98°F. The physical examination was significant for a prominent S2 sound and a point of maximum impulse slightly displaced to the left. The patient had no abdominal organomegaly on palpation.

His laboratory results on admission are shown in the Table. An electrocardiogram revealed a sinus rhythm with left ventricular hypertrophy by voltage and no conduction abnormalities. A renal and bladder ultrasound revealed small kidneys of approximately 9 cm in length without hydronephrosis and with echogenic changes consistent with chronic renal disease. No abdominal organomegaly was reported from the limited views of this imaging study.

The patient was admitted to the hospital with diagnosis of hypertensive urgency and chronic kidney disease stage V. He received urgent hemodialysis using a Fresenius Optiflux F160NRe membrane, an electron beam sterilized polysulfone membrane. The platelet count dropped the morning after the first dialysis session (Table).

The patient did not manifest any bleeding or thrombotic event. He had received heparin for deep vein thrombosis prophylaxis and during dialysis, but he was not on any other medications known to cause thrombocytopenia, such as H2 blockers and beta-lactamase antibiotics. The only medication the patient was taking prior to admission was acetaminophen as needed for headaches.

The patient denied any substance abuse, including alcohol. Heparin was discontinued, but the platelet counts failed to normalize (Table). Heparin-induced thrombocytopenia (HIT) antibody and serotonin release assay were negative; the international normalized ratio, the prothrombin time, the partial thromboplastin time, and the fibrogen level were within normal range. A peripheral blood smear revealed large platelets without schistocytes. A viral hepatitis panel and an HIV test were negative. 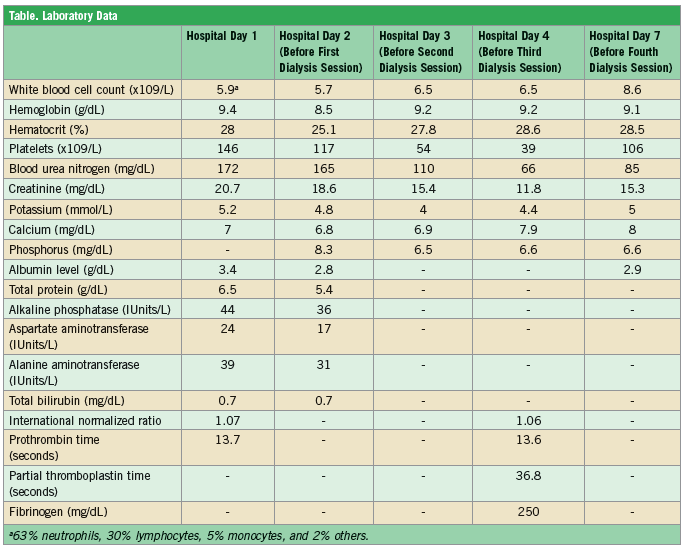 Disseminated intravascular coagulation (DIC) is a systematic activation of the coagulation cascade with an initial thrombotic phase followed by a hemorrhagic one. DIC during hemodialysis has been reported during the initial dialysis sessions as a result of complement activation, although speculation existed as to whether cellophane membranes were the cause.8 This diagnosis was excluded as patient did not have any thrombotic or bleeding manifestations, shistocytes in the peripheral blood, and low fibrinogen level.

Platelet count in patients with chronic kidney disease is generally within normal range, but has been shown to be lower compared to that of healthy controls. Accumulations of variety of toxins in the uremic plasma have been implicated in the pathogenesis of thrombocytopathy, but not thrombocytopenia.9

After the third dialysis session, the patient was dialyzed using a Baxter Exeltra 150 membrane, a cellulose triacetate membrane that is gamma-sterilized. The patient’s platelet count normalized (Table).

Thrombocytopenia in hemodialysis could be secondary to an idiopathic reaction to the dialyzer membrane, HIT, DIC, or hypersplenism. Although uremia causes platelet dysfunction, it does not cause thrombocytopenia.

Mary Ann Rodriguez, MD, is a graduate of the internal medicine residency program in Austin and currently is the medical director of the communicable disease unit in the City of Austin Health and Human Services Department in Austin, TX.

Alejandro Moreno, MBBS, MPH, JD, is an associate professor of medicine and an associate program director of the internal medicine residency program at the University of Texas at Austin Dell Medical School in Austin, TX.