A Homeless Teenager With a Painful and Growing Neck Mass

A 15-year-old girl presented with a 2-week history of a mass on the left side of her neck. She had taken aspirin and ibuprofen and had tried several home remedies without alleviation of the swelling and associated pain. Over the 4 to 5 days before presentation, she had noted a rapid enlargement of the unilateral mass, along with increasing pain. She denied fever, trauma, animal bites, insect bites or stings, recent illness, or a history of methicillin-resistant Staphylococcus aureus infection or abscess. All of her immunizations were up to date.

The adolescent is a frequent runaway, and she had been homeless for the previous 2 weeks. She denied use of alcohol, tobacco, or illicit drugs, and she denied sexual activity.

On physical examination, the patient had normal vital signs, was disheveled, and appeared uncomfortable as a result of pain. The mass on the left side of her neck had central fluctuance with surrounding induration. 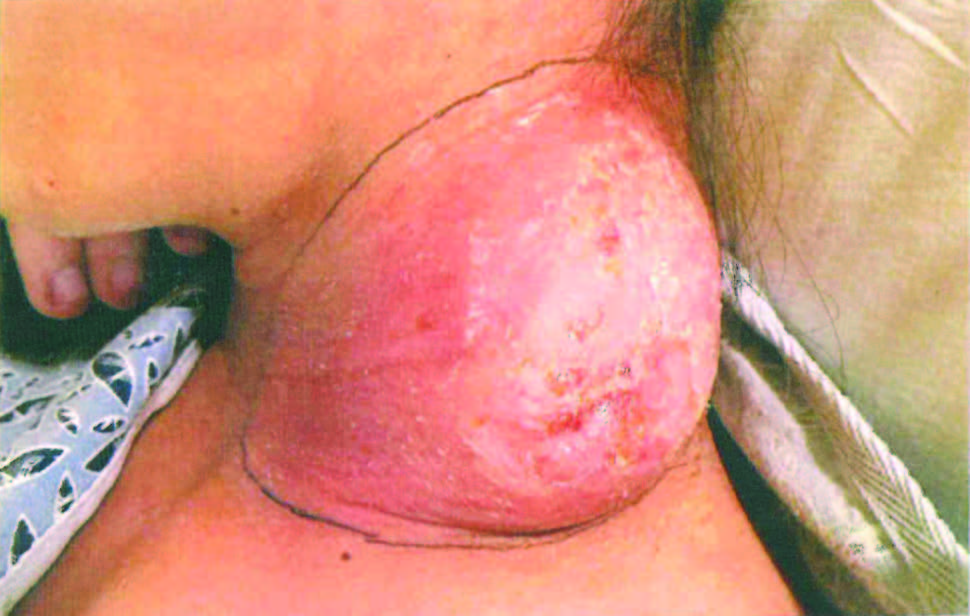 The neck mass spontaneously drained before she was taken to the operating room for thorough incision and drainage. Wound culture grew group A β-hemolytic streptococci and methicillin-sensitive Staphylococcus aureus. Her antibiotic therapy initially had been empiric intravenous vancomycin and gentamicin; this later was switched to intravenous oxacillin and clindamycin, and finally to oral cephalexin. The patient made a full recovery.

Neck masses in the pediatric population most commonly are of infectious etiology. Congenital malformations and benign neoplasms are less common causes, and malignancies are rare causes. Benign neoplasms include lipomas, fibromas, and salivary gland tumors, and they tend to develop gradually.1 Malignant lesions include lymphoma, rhabdomyosarcoma, and thyroid carcinoma; these should be suspected if the mass is firm, rubbery, fixed, and persistent despite antibiotic therapy.1

The workup for a neck mass in a child or adolescent includes a complete blood count and tests for inflammatory markers. In addition to an ASO test, tests for Epstein-Barr virus, cytomegalovirus, Toxoplasma gondii, and HIV titers also may be considered if there is no response to antibiotic therapy, and especially with bilateral involvement. A purified protein derivative test may be indicated if tuberculosis exposure is a possibility. Imaging should include ultrasonography and/or computed tomography with contrast to evaluate for malignancy or abscess.1

Our patient’s neck mass was new and rapidly enlarging, which was concerning for an infectious and inflammatory cause. Being homeless, she may have had exposure to wild animals, cats, or ticks, in which case the workup should include tests for Bartonella henselae or Francisella tularensis antibodies. She also may have had exposure to a crowded shelter, raising concern for tuberculous cervical lymphadenitis secondary to Mycobacterium tuberculosis infection, although associated lesions typically are painless and develop gradually.2

Felicia Lam, MD, MPH, is a pediatric resident at the University of Nevada School of Medicine in Las Vegas, Nevada.

Pisespong Patamasucon, MD, is a pediatric infectious disease specialist and a professor in the Department of Pediatrics at the University of Nevada School of Medicine in Las Vegas, Nevada.