An adolescent boy presented for evaluation of the development of hives and vomiting after the exertion associated with playing basketball. The intermittent, exercise-associated episodes had begun when he was 10 years old, and over the next several years he had experienced 8 to 10 similar events. He described hives that would initially appear on his upper extremities and would progress to involve his trunk.

After having been evaluated previously by another physician, he had received a diagnosis of anaphylaxis and had been prescribed self-injectable epinephrine for use as needed. No formal workup had been completed, however, and no clear trigger for the episodes had yet been elucidated.

His past medical history was otherwise unremarkable. He denied additional chronic atopic conditions, including asthma, atopic dermatitis, or allergies to foods, drugs, or insect stings. Upon questioning, the boy reported that the urticaria developed only when he exercised after having eaten, but he voiced frustration that the symptoms did not occur consistently with all foods. He reported that he does not develop hives aside from after having exercised.

He noted that he had become selective about his food choices, particularly “greasy foods,” since he was able to exercise at full capacity as long he avoided such foods. He described one particular episode of hives and vomiting that had developed while playing basketball after he had eaten a large quantity of pizza, and he noted a separate but similar event that had been associated with eating fried chicken. The events seemed to occur in conjunction with high-intensity exercise, as opposed to lighter workouts.

He described the hives as being large in size and not lasting for more than 24 hours. There was no history of angioedema. He denied a clear association of symptoms with other foods, including fish, eggs, milk, peanuts, tree nuts, shellfish, fruits, and vegetables. He reported no association between the symptoms and other obvious triggers, including stress, hot or cold exposure, fever, vibration, pressure, or sun exposure. He denied difficulty breathing, syncope, diarrhea, joint pain, and fever. He noted that discontinuation of exercise resulted in symptom resolution within 30 minutes.

Physical examination findings at the time of evaluation were unremarkable.

The patient underwent targeted allergy testing based on his history in an effort to identify a potential unifying ingredient in the “greasy foods” that triggered his symptoms.

Skin prick testing results were positive for wheat (3 × 3-mm wheal, 15 × 15-mm flare) but were negative to all other potentially implicated foods, including eggs, chicken, and tomatoes. The patient declined to undergo an exercise challenge following food ingestion.

He received a diagnosis of food-dependent exercise-induced anaphylaxis (FDEIA), with wheat as the offending food. He was counseled to avoid wheat ingestion 2 to 4 hours prior to exercise. He was further instructed to continue carrying self-injectable epinephrine, to exercise with a partner, to carry a cell phone while exercising, and to obtain a medical alert bracelet. He also was provided with in-depth education about the signs and symptoms of anaphylaxis and the appropriate plan of care in case of a recurrence. He was advised that he could continue to use an oral antihistamine for symptomatic relief after an anaphylactic event.

Since the time of diagnosis, the patient has not had another episode of FDEIA.

Sorting through the list of differential diagnoses for a child with exercise-induced symptoms that are suggestive of anaphylaxis can be challenging. However, a targeted history can effectively yield clues about the underlying diagnosis, enabling a practitioner to provide management recommendations to prevent a serious negative outcome while awaiting a more definitive evaluation. 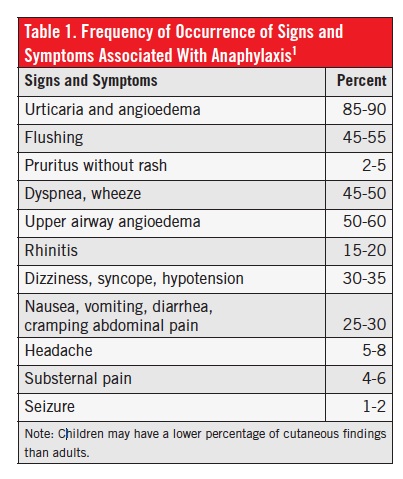 A critical step in the evaluation of such a child is distinguishing the signs and symptoms that are consistent with anaphylaxis (Table 1) from those associated with potentially less-severe reaction.1 Importantly, while most patients with anaphylaxis present with cutaneous manifestations, the absence of such dermatologic findings does not rule out anaphylaxis. Additionally, children have a lower likelihood of presenting with cutaneous findings than do adults.1 Furthermore, while anaphylaxis often is considered only in the context of hypotension and/or respiratory distress, its presenting features can be subtle and variable, involving predominantly the gastrointestinal system or neurologic system.

Table 2 outlines the differentiating characteristics of conditions that may be associated with exercise and that may present with features of anaphylaxis. Important delineating historical points include the timing of the preceding meal, the type of exercise, the presence or absence of skin lesions (which characteristically are absent in exercise-induced asthma), and the presence or absence of angioedema. 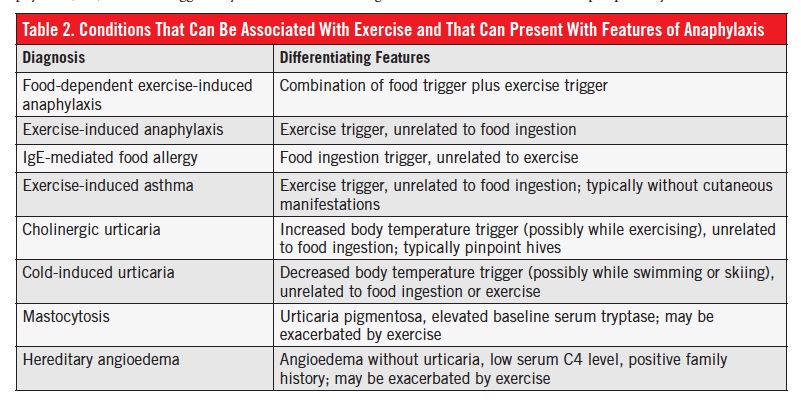 The size of urticaria lesions can be a useful discriminator, since lesions associated with most forms of urticaria and anaphylaxis, including EIA and FDEIA, typically are larger (10-15 mm or greater) than the smaller, pinpoint lesions associated with cholinergic urticaria (Figures 1 and 2).2 Based on the frequently fleeting nature of these rashes, the lesions sometimes can be differentiated effectively by asking patients to photograph them with their cell phone to obtain images for review at a future office visit. 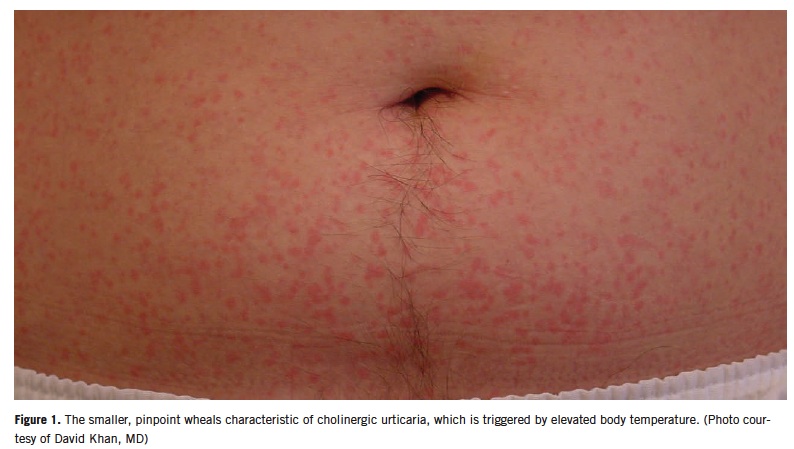 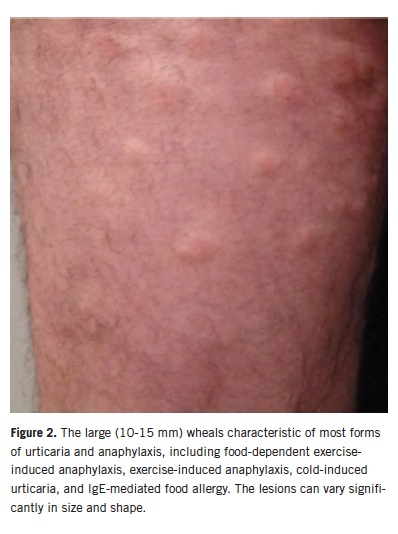 Swimming or skiing could present scenarios in which the core body temperature is lower during exercise, triggering cold-induced urticaria. This scenario emphasizes the importance of asking about the type of exercise that is associated with the symptoms. Persons with hereditary angioedema develop swelling most commonly of the face, extremities, genitals, and larynx; however, this condition does not present with urticaria.3,4 Vigorous exercise can exacerbate hereditary angioedema episodes, and a positive family history of this autosomal dominant condition, along with and low levels of serum C4, provide clues to the diagnosis.3

FDEIA is an uncommon form of anaphylaxis that occurs with exercise 2 to 4 hours after the ingestion of a particular food trigger. Anaphylaxis does not occur following ingestion of the food in the absence of exercise.

The pathophysiology of this condition is poorly understood. FDEIA more often presents in girls and women and occurs most commonly during the teenage years until the 30s.6 The most commonly implicated foods are wheat7,8 and shellfish,9,10 but many other triggers have been identified, including fish, peanuts, tree nuts, cow’s milk, fruits, vegetables, and meats.

Both high and low levels of physical exertion have been associated with FDEIA.2 The most common types of exercise associated with FDEIA (and EIA) are jogging and running. Nevertheless, a variety of activities, including brisk walking, tennis, racquetball, dancing, bicycling, aerobics, and skiing, also have been reported in association with FDEIA.11 Both food-specific and more generalized variants of FDEIA (eg, developing anaphylaxis when exercising after eating any food, as opposed to a specific food trigger) have been described.1

A detailed history is critical to effectively diagnosing this condition, including a history of anaphylactic symptoms within 30 to 120 minutes of ingesting the inciting food. Clinical symptoms usually appear between 5 and 50 minutes after the start of exercise.

Targeted skin prick testing or specific IgE in vitro testing will support the diagnosis. When necessary, an open food-exercise challenge can assist in making the diagnosis; however, this test should be done in a hospital or allergist’s office. It is worth noting that such challenges can yield inconsistent results due to confounding variables at the time of the anaphylactic event, since FDEIA and EIA generally do not occur every time the patient exercises.2

The mainstay of treatment of FDEIA is avoidance of the offending food trigger at least 4 hours prior to exercise. Patients and families also should be prescribed and carry self-injectable epinephrine and instructed in its proper use. It also is advisable that a specific written emergency treatment plan be established, and that patients wear an alert bracelet identifying their medical condition.

Patients with a history of FDEIA should always exercise with a friend and carry a cell phone or a medical alert device for use in the event of an emergency. The exercise partner should be ready and able to properly administer the self-injectable epinephrine.

While no medication can prevent reactions from occurring, antihistamines can assist in the relief of the cutaneous manifestations (although patients with cholinergic urticaria tend to respond more favorably to antihistamines), and corticosteroids may play a role in the prevention of a delayed biphasic reaction.1,2

Mark C. Stahl, DO, is a pediatrician and allergy/immunology staff physician at the Children’s Hospital of San Antonio, Texas.