Keck School of Medicine of the University of Southern California, Los Angeles, California

The parents of a 1-month-old Latino boy brought him to the family medicine clinic out of concern for poor feeding, abdominal distension, and poor weight gain. The infant had been born via a low transverse caesarean delivery at 39 weeks of gestation. At birth, he weighed 3,540 g and had an Apgar score of 9 at 1 and 5 minutes. The mother had had an uncomplicated pregnancy and had received routine prenatal care. She had no family history of genetic diseases, and prenatal screening test results were negative.

The infant had passed stools during his initial 3-day hospitalization. Coombs test results were positive, but he had no signs of jaundice and was discharged home. Four days later, at 7 days old, the infant was brought to the emergency department (ED) with jaundice and poor feeding. His total bilirubin level at the time was 21.7 mg/dL. The infant was admitted to the neonatal intensive care unit (NICU) for hyperbilirubinemia and to rule out sepsis.

During his 5-day NICU stay, the infant was found to be an “inconsistent nippler,” but he had sustained weight gain. Sepsis was ruled out with negative urine and blood culture results. Results of magnetic resonance imaging of the brain were normal. The infant was not passing stools and was given a rectal suppository for presumed constipation. Scant fecal material was noted in his diaper. The infant was discharged, and his parents were instructed to follow up with his primary care physician (PCP). 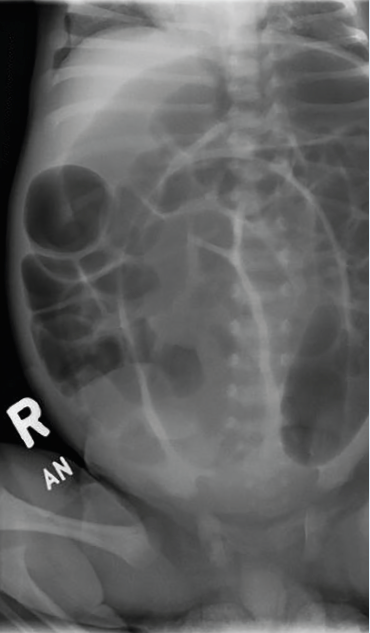 The mother brought the infant to our family medicine clinic 3 days later, at day 15 of life. On physical examination, the infant’s abdomen was mildly distended, but he was in no apparent distress and was sent home. Dietary and physical maneuvers for constipation relief were discussed with the parents.

The mother returned with him 3 days later for follow up, stating that the constipation was unchanged and that she noted worsening abdominal distension.

The infant was lying in a stroller and resting comfortably. He was afebrile, with no dysmorphic features. He had a normal palate without signs of abnormalities. His heart rate was 118 beats/min, regular, and without murmurs; his respiratory rate was regular and unlabored. He had good capillary refill and moist mucous membranes. There was no evidence of cyanosis.

His abdomen was found to be markedly distended, tympanic, and with decreased bowel sounds in all 4 quadrants. A rectal examination revealed scant, bloody stool that later was found to be heme-positive.

Stat abdominal radiography was ordered, the results of which showed a diffusely distended colon. The gastroenterology fellow on call was notified, and the child was sent to the local children’s hospital ED for evaluation and to rule out colonic obstruction. The infant was admitted to the hospital, and a rectal biopsy was taken. Biopsy results confirmed Hirschsprung disease. Because of the patient’s age, a diverting colostomy was completed for symptomatic relief until he was at an age at which a major surgical intervention was possible. The infant tolerated the procedure well and was discharged after a brief inpatient stay.

Since the surgical procedure, the child has made substantial gains in weight and development. The colostomy revision is scheduled for 6 months after the initial surgery, when the child is approximately 7 months old.

Hirschsprung (HSCR) disease, or congenital aganglionic megacolon, is a rare condition that occurs in approximately 1 in 5,000 live births.1,2 Incidence varies among ethnic groups, but it is predominant among white, African American, and Asian populations. Boys are more often affected than girls.1,3

Usually presenting during the first 12 weeks of life,3 HSCR is motor dysfunction caused by the absence of ganglia in the distal colon, creating functional obstruction.1,2 It is classified as short-segment HSCR when the aganglionic segment does not extend beyond the upper sigmoid, and long-segment HSCR when the aganglionic segment extends proximally to the sigmoid colon.1,4 However, the condition most often affects small segments of the colon. Rarely (5% of cases) does it affect the entire colon.

HSCR has a genetic component. A chromosomal abnormality has been noted in 21% of cases, with trisomy 21 being the most frequent by far. Isolated traits of HSCR are found in 70% of cases.1,2,4 Congenital malformations, including gastrointestinal malformations, cleft palate, and cardiac septal defects have a higher in frequency in persons with HSCR.2,4

While it is most often diagnosed during the newborn period, cases of diagnosis later in infancy or in adulthood have been reported in persons with severe constipation since birth, abdominal pain, and distension.3,5 In the newborn period, cases of HSCR present as abdominal distension that is relieved with enemas or rectal stimulation but then recur, along with a failure to pass stool within the first 48 hours, vomiting, or neonatal enterocolitis.6,7

Classical images on abdominal radiographs show a dilated proximal colon with a paucity of air in the rectum.6 Barium enema shows small, uncoordinated contractions in the rectum. Anorectal manometry shows an absence of relaxation of the internal sphincter to rectal distension.4,6 Colonic suction biopsy, used to obtain samples from the mucosa and submucosal area, can be done at the bedside; however, full-thickness biopsy remains the gold standard for diagnosis.5,6

Treatment is surgical.6 Management requires resection of the aganglionic segment of the colon, bringing the normal colon to the anus and creating a new coloanal anastomosis.3,7 Fistula or stenosis of the anastomosis and enterocolitis are the main short-term complications. Long-term complications include chronic constipation, incontinence, and late mortality.7