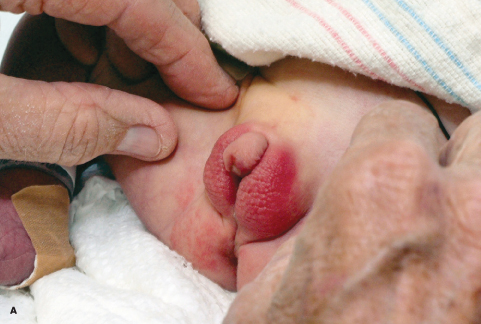 This baby was born at 40 weeks’ gestation via spontaneous vaginal delivery. APGAR scores were 9 at both 1 and 5 minutes. Birth weight was 3260 g, appropriate for gestational age. The 28-year-old mother (gravida 4, para 3, now 4) had minimal prenatal care. The youngest sibling had congenital adrenal hyperplasia (CAH), salt-wasting form, caused by 21-hydroxylase deficiency. 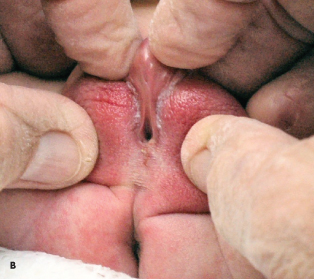 Examination shortly after birth revealed remarkably ambiguous genitalia (A). This consisted of a phallus, 2.2 cm long and 1.1 cm wide, and prominent hyperpigmented labioscrotal swellings with impressive rugae that resembled a bifid scrotum. No gonads were palpable. The infant also had a stellate vaginal entroitus of 4 mm (B), posterior fusion of the labioscrotal folds, and a urethral meatus on the ventral shaft of the phallus.

A presumptive diagnosis of 21-hydroxylase deficient CAH, salt-wasting form, was possible in this infant because of the family history of the disorder. Accordingly, treatment with hydrocortisone, fludrocortisone, and supplemental 3% sodium chloride was added to the feedings starting at birth. The infant’s karyotype obtained on day 1 of life was 46,XX.

The most common cause of ambiguous genitalia in a chromosomally normal female is CAH. This disorder affects the adrenal cortex and manifests as cortisol deficiency and androgen excess. The deficient enzyme in 90% of cases is 21-hydroxylase.1 A high concentration of 17-hydroxyprogesterone is diagnostic of the 21-hydroxylase deficiency form of CAH; the level in this baby at 1 day of life was 1397 ng/dL (normal, less than 100 ng/dL).

In about 75% of patients with the classic 21-hydroxylase deficiency, defective aldosterone synthesis leads to excessive renal sodium excretion—the so-called salt-wasting form.2 This newborn’s urine sodium level was 20 mEq/L (normal, less than 10 mEq/L). Both cortisol and aldosterone require the 21-hydroxylase enzyme for their synthesis.3 CAH is an autosomal recessive inher-ited trait. Having an infant with the disorder means that there is a recurrence risk of 25% for each subsequent birth.4

Exposure to high levels of adrenal androgens begins at 8 weeks of gestation, and produces virilization of the genitalia. This newborn’s testosterone level was 100 ng/dL (normal, 10 to 20 ng/dL). To minimize virilization, pregnant women with female infants at risk must be treated beginning in the first trimester of their pregnancy with dexamethasone, which readily crosses the placenta; however, an accurate diagnosis is necessary. Diagnosis requires DNA analysis obtained by chorionic villus sampling in the first trimester or by amniocentesis in the second trimester.5,6 The mother of this baby was not treated.

The state of Florida screens all newborns for CAH by testing 17-hydroxyprogesterone values. Male newborns with this condition can appear normal at birth and are at risk for an acute adrenal crisis if the diagnosis is not known.