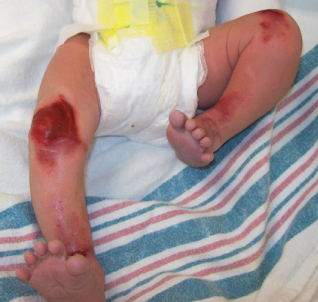 Bright erythematous blisters with desquamation were noted on the knees, ankles, and wrists
of a male neonate at birth. The baby was born after a rapid spontaneous vaginal delivery at
38 weeks’ gestation to a 24-year-old mother. She had tested positive for group B Streptococcus (GBS) and was treated inadequately. A subsequent laboratory workup to rule out GBS infection in the infant showed normal results, and blood culture results were negative. Prenatal history was unremarkable. Apgar scores were 9 at 1 minute and 9 at 5 minutes. Vital signs were normal. The baby had good tone and reflexes and a strong cry. He had no oral mucous membrane ulcerations and normal nails. Lung, cardiac, abdominal, musculoskeletal, and genitourinary findings were normal.

The infant’s 3-year-old sister had similar skin lesions at birth that were diagnosed as epidermolysis bullosa simplex by microscopy. She currently had only one small blister on her right heel where her shoes rubbed her foot. The mother had occasional blisters as a child, but they were small and resolved by age 3 or 4 years.

Treatment is primarily directed at preventing skin trauma. Good nursing care and wound attention is vital to the healing process. Prompt treatment of secondary infection is necessary to prevent septicemia. Unfortunately, the child with epidermolysis bullosa faces a lifetime risk of infection (cutaneous or systemic), impaired wound healing, and a wide range of physical ailments that become more apparent with age.

This infant’s extensive, open blisters were treated with topical antibiotic ointment and were protected during healing. The parents were knowledgeable of how to care for the blisters and felt comfortable having the infant at home. A routine circumcision, desired by the parents, was postponed on our recommendation. The in-hospital hearing test was also postponed to avoid placement of sticky electrodes on the baby’s skin. The newborn was discharged home without further complications at 48 hours of life.