A 51-year-old man with a history of type B aortic dissection presented with severe right upper quadrant pain. He was febrile and hypotensive.

An emergent CT scan (A ) revealed a 6-cm, fluid-filled lesion in the right anterior lobe of the liver (white arrow), which raised suspicion of a hepatic abscess or biloma. A 4.4-cm hepatic artery aneurysm (black arrow) was also discovered. In addition, the false lumen of the aortic dissection was visible (white arrowhead). 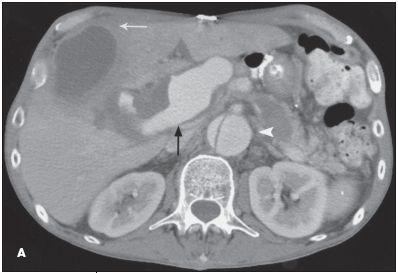 A CT angiogram with 3-dimensional reconstruction revealed massive arteriomegaly and obvious dissection of the aorta (B ). The celiac trunk, superior mesenteric artery, and inferior mesenteric artery originated from the false lumen of the dissection. The hepatic artery was diffusely aneurysmal. Several other aneurysms were seen in the gastric, splenic, and subclavian arteries. Results of genetic studies, including evaluation for collagen abnormalities and sequencing of the fibrillin-1 gene on chromosome 15q (to rule out Marfan disease), were normal. 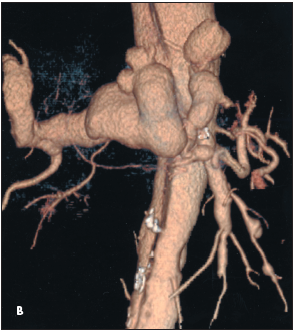 The main factors involved in the pathogenesis of hepatic artery aneurysms are atherosclerosis, medial degeneration, trauma, and infection.3  Vasculitic syndromes (polyarteritis nodosa, systemic lupus erythematosus, Takayasu arteritis, and Wegener granulomatosis), longterm use of oral amphetamine, and heritable disorders of connective tissue are less common causes.4  Up to 80% of affected patients present with rupture, which may produce the Quincke classic triad of right upper quadrant pain, jaundice, and hemobilia.2,5

Because these aneurysms are rare, there are no standardized treatment guidelines. Management may involve surgical excision, ligation, venous or synthetic grafting, transcatheter embolization, or observation.1,4,5

Surgery was not considered for this patient because of his infected biloma. He died after an extremely complicated hospital course.