A 58-year-old woman presented with 4 days of episodic fevers to 38.9°C, nausea with nonbilious and nonbloody vomitus, and pleuritic chest pain. Her symptoms had been preceded by 1 week of generalized malaise, right-sided abdominal pain, and abdominal bloating. No alleviating or aggravating factors were noted. She reported an associated nonproductive cough, anorexia, and drenching night sweats. She denied having any similar prior symptoms, weight loss, joint pain, history of malignancy, notable alterations in bowel patterns, and dietary changes. She had no history of injection drug use or recent abdominal surgery. Her medical, surgical, family, and social histories were noncontributory.

Physical examination. Her vital signs included the following values: temperature, 39.9°C; heart rate, 114 beats/min; blood pressure, 85/52 mm Hg; respiratory rate, 25 breaths/min; and oxygen saturation, 88% on room air. She was ill-appearing and was  in mild respiratory distress, but she was able to speak in full sentences. 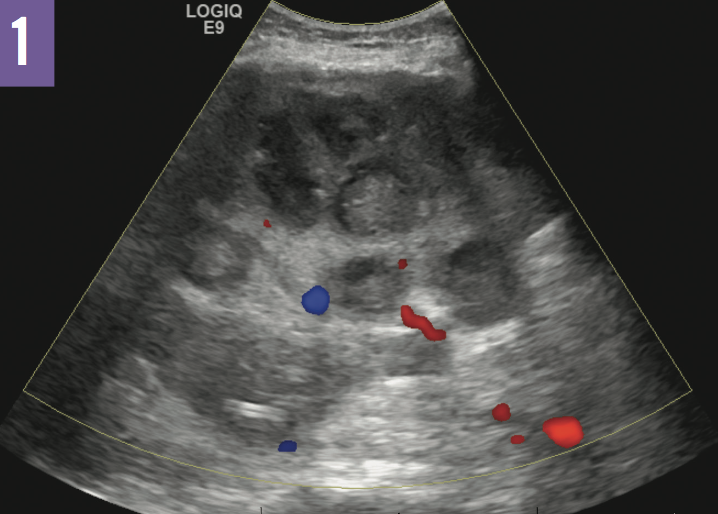 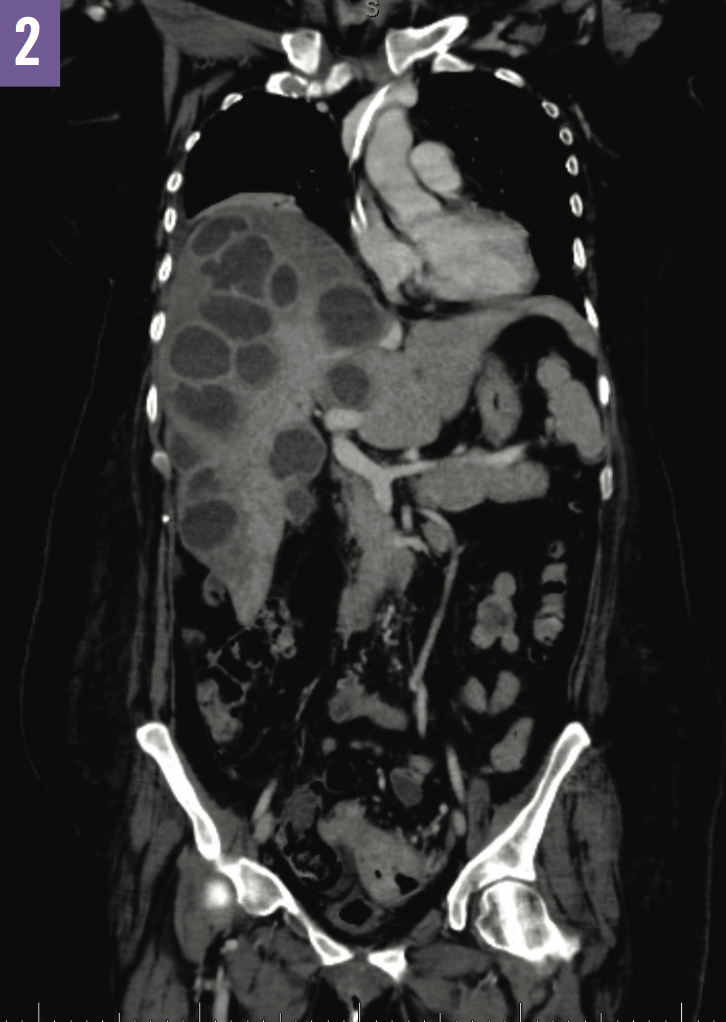 Figure 2: Coronal-view CT scan of the abdomen and pelvis showing hepatomegaly with multiple liver abscesses, some with septations. Also visible is an elevated right hemidiaphragm resulting from hepatomegaly. 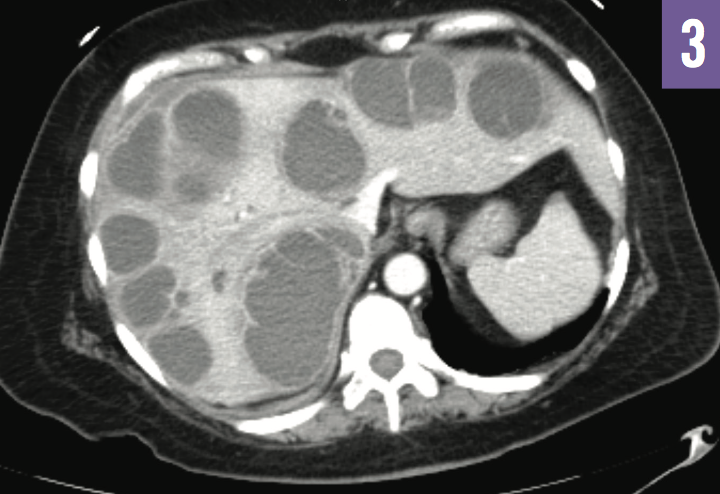 The patient underwent percutaneous drainage of 5 hepatic lesions. Following this procedure and resuscitation in the intensive care unit, her hemodynamics improved. Given the severity of presentation and a lack of any previous blood culture results to guide therapy, the patient was started on empirical meropenem therapy for gram-positive, gram-negative, and anaerobic coverage until culture results from the abscess and blood returned.

Gram staining of the abscess showed neutrophils containing phagocytized gram-positive intracellular cocci in pairs and chains (Figure 4). Cultures from 3 blood samples, as well as the purulent material from the abscess drainage, grew bacteria in the Streptococcus anginosus group, sensitive to ceftriaxone and meropenem but resistant to ampicillin. Cytology examination results showed no malignant cells. 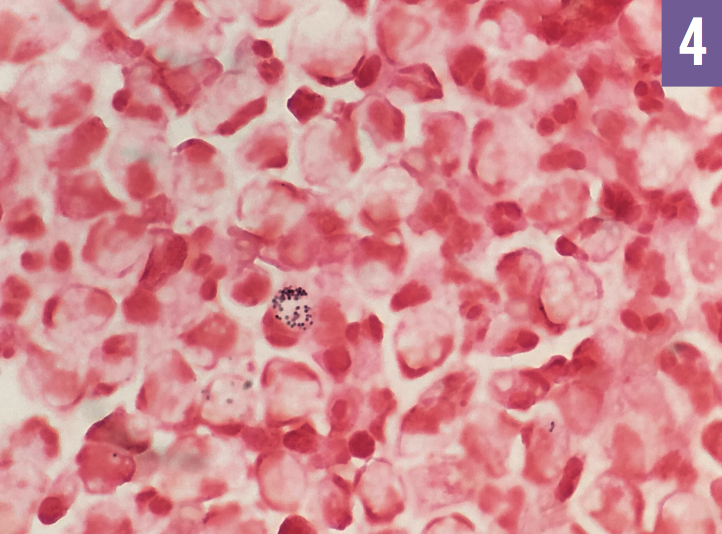 Transesophageal echocardiography showed no vegetations indicative of infective endocarditis. Further radiographic workup for the source of the infection revealed multiple oral micro­abscesses on facial imaging, along with an incidental finding of wall thickening of the sigmoid colon on abdominal imaging. The latter finding became significant when the patient developed a large-bowel obstruction at this site and underwent subsequent surgical resection with diverting colostomy. The pathology report of the sigmoid mass revealed adenocarcinoma without lymph node involvement.

In our patient, poor dentition was highest on the list of differential diagnoses, based on examination findings and subsequent findings of oral microabscesses. However, colon cancer associated with S anginosus infection was also considered, given the sigmoid colon mass seen on imaging results.

Outcome of the case. The patient remained on antibiotics for 6 weeks and was seen as an outpatient by an infectious disease specialist. Ceftriaxone was chosen for long-term therapy given its ease of administration, long half-life, and excellent tissue penetration. It was felt that this long parenteral antibiotic course, along with standard oral hygiene, would be sufficient treatment of the oral microabscesses. Given the presence of multiple abscesses of varying complexity at the time of presentation, it was decided that the patient would undergo repeated imaging studies before antibiotic cessation. A CT scan revealed considerable reduction in the size of the abscesses. The patient also follows up with surgical and medical oncologists for management of her colon cancer.

Discussion. A common constituent of the gastrointestinal (GI) tract, S anginosus (formerly known as Streptococcus milleri) is a nonhemolytic viridans streptococcal species that was first isolated from a dental abscess in 1956.1 Since then, it has gained notoriety for its ability to form abscesses, afflict almost any organ system, and lead to disseminated disease. The exact mechanism of abscess formation is debated but is thought to be in part secondary to resistance of the organism to killing by polymorphonuclear leukocytes and its ability to delay chemotaxis.2 Notably, S anginosus has been recognized as a cause of pyogenic liver abscess.3

Most visceral abscesses involve the liver, with the right hepatic lobe being more often implicated.4 However, as was seen in our patient’s case, diffuse liver disease is possible and may require extensive intervention.

The presentation of this disease can vary. Fever is the most common symptom, followed by abdominal complaints. Peritoneal signs may be present as a result of abscess rupture, but peritonitis itself can also lead to seeding of the liver and subsequent abscess formation. Curiously, half of patients presenting with liver abscess will not have signs that point to liver disease such as jaundice, hepatomegaly, or right upper quadrant tenderness.4 The most reliable laboratory abnormality is an elevated ALP level. Bacteremia is identified in approximately 30% to 50% of patients.4

Imaging with ultrasonography or CT scanning can better identify liver abscesses and may help in selecting lesions for targeted intervention.

Percutaneous drainage is the best means of treating liver abscesses. Occasionally, a drain is left in place to help clear the abscesses. Because our patient had a profound abscess burden, a multidisciplinary discussion with colleagues in interventional radiology led to the decision to address the largest lesions with drainage and to use antimicrobial therapy to treat the lesser targets. Parenteral antimicrobial therapy should be administered for 4 to 6 weeks, with longer durations considered based on repeated imaging findings.4 Oral antibiotics may be used, depending on preserved gut function and microbial sensitivities. In our case, the colon pathology and antimicrobial resistance pattern made oral agents a less-appealing choice.

Factors that predispose a patient to percutaneous treatment failure and that warrant surgical intervention include viscous abscess contents that may clog a pigtail catheter drain, the presence of yeast, concurrent biliary disease necessitating surgery, multiple large abscesses, and failure to respond to percutaneous drainage after 1 week of therapy.4

A particularly unique aspect of this case was abscess formation occurring with concurrent intestinal adenocarcinoma. While the association between bacteremia and colon malignancy has been more established with Streptococcus gallolyticus (formerly Streptococcus bovis; group D streptococcus) infection, the link between colon cancer and S anginosus infection is far more tenuous, with only a few cases having been reported in the literature.5,6 Because several patients with liver abscesses have been found to have a higher incidence of colon cancer, some evidence supports performing colonoscopy in patients with cryptogenic liver abscess.7