Henoch-Schönlein Purpura: A Boy With an Atypically Asymmetric Rash

A 4-year-old boy presented to the emergency department after he began limping and developed swelling in his right hand the previous day. He also had a 2- to 3-day history of nasal congestion without fever or cough. He had no reported injuries, and no medications had been administered at home.

Physical examination revealed an alert, afebrile boy who was sitting in bed, did not want to move his right hand or legs, and was unable to walk or bear weight due to pain. His physician had noted a nonblanching painless rash on his legs, which was more prominent on the right side than the left side. The patient’s right hand was swollen and painful with reduced finger and wrist movements (Figure). His white blood cell count, electrolyte levels, and renal function were noncontributory. 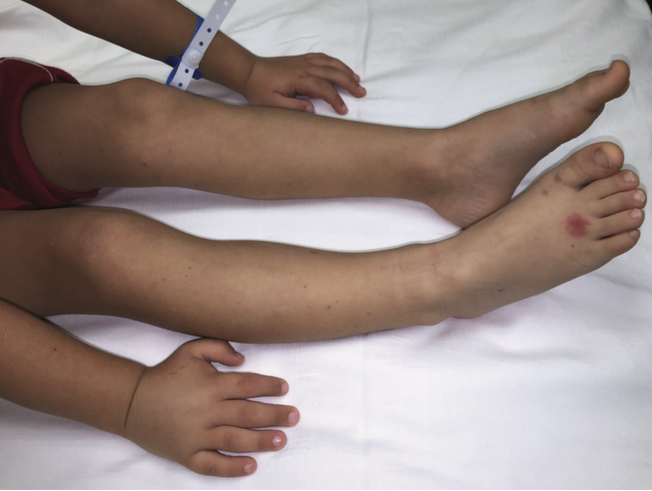 The boy received a diagnosis of Henoch-Schönlein purpura (HSP). Although this condition is rare, it is the most common form of vasculitis in children, with an incidence of 10 to 22 children per 100,000 annually and a slight male predominance. The majority of patients with HSP are under 10 years of age, with a peak incidence at 6 years.1,2

HSP is a clinically diagnosed condition. Individuals with HSP experience palpable purpura without thrombocytopenia or coagulopathy and may experience arthralgia and/or arthritis, abdominal pain, antecedent upper respiratory illness, and renal involvement.1 It is an immunoglobulin A immune complex–mediated small-vessel vasculitis resulting in petechia and purpura. These complexes are triggered by various immunizations and infections, with group A β-hemolytic streptococcus being the most common.1,2

Skin lesions are classically symmetric and involve dependent areas of the buttocks and extensor surfaces of the extremities, with elbows and knees commonly affected. The rash is initially characterized by nonpruritic erythematous papules or urticarial wheals and later matures into crops of petechiae and purpura. Nonpitting angioedema of the scalp (20%) and extremities (46%) also occurs. Nonmigratory arthritis (swelling, warmth, and tenderness) is present in 60% to 75% of patients with HSP and typically involves the knees and ankles.1,2 The arthralgia can precede the development of rash in 15% to 25% of cases.

Colicky abdominal pain usually occurs 1 week after the initial presentation and can mimic acute abdomen. Vomiting and gastrointestinal (GI) bleeding occur in 30% of cases. Intussusception occurs in 2% to 3% of cases, with a mural hematoma serving as a lead point.1

Renal disease (microscopic hematuria, red cell casts, and proteinuria) occurs 1 to 6 months after initial presentation and is the most serious sequela.2 Renal manifestations will remit in most cases. There is no correlation between extrarenal and renal manifestations of HSP. Progressive glomerulonephritis is a rare complication and is associated with the patient having prolonged proteinuria. HSP recurs in up to one-third of patients within the first 6 months after onset and is more common in patients with renal involvement.1

HSP has no definitive diagnostic test. Palpable purpura in the absence of thrombocytopenia or coagulopathy is most suggestive and is present in all patients with HSP. A skin biopsy will show leukocytoclastic vasculitis, and a kidney biopsy will show membranoproliferative glomerulonephritis.1

Management of HSP is supportive, because most patients spontaneously recover.2 Acetaminophen and nonsteroidal anti-inflammatory drugs (NSAIDs) can be used to relieve pain, but NSAIDs may aggravate GI symptoms, such as vomiting and bleeding, and should be avoided in patients with renal involvement.

Rest and elevation of affected extremities can help with pain and purpura, because the latter can worsen with activity.1 Hospitalization may be required for dehydration, hemorrhage, or pain control. Referral to a nephrologist is recommended for patients with renal involvement.2 Oral corticosteroid treatment is appropriate in patients with renal or severe extrarenal symptoms, such as joint pain and scrotal swelling; however, corticosteroid treatment does not affect purpura resolution or reduce the risk of renal disease.3

Our case report is unique, because the patient had an asymmetric skin rash on his legs with isolated angioedema of his right hand. Clinical diagnosis of HSP should be considered in similar cases to reduce unnecessary testing and the likelihood of a delay in diagnosis.