Henoch-Schönlein purpura (HSP) is a small vessel leukocytoclastic vasculitis with deposition of immunoglobulin A–dominant immune complexes. Also known as anaphylactoid purpura, HSP is characterized by a triad of palpable purpura (without thrombocytopenia), abdominal pain, and arthritis.

The peak age of onset of HSP is between 4 and 6 years of age. White people have the highest incidence of the condition, with a male predominance. Certain infections such as group A β–hemolytic streptococcus, Staphylococcus aureus, influenza, parainfluenza, Epstein-Barr virus, adenovirus, parvovirus, and mycoplasma may trigger HSP.1

The classic presentation of HSP includes lower-extremity purpura, arthritis, abdominal pain, and renal disease. The purpuric rash is usually on dependent areas but also may be seen on the arms, face, and ears.

The purpura may be preceded by a maculopapular or urticarial rash that usually disappears within 24 hours. Rarely, the rash may appear as bullae or necrotic lesions.

Arthritis is seen in 75% of children with HSP, with the knees and ankles the most commonly affected joints.2 The arthritis usually is oligoarticular, self-limited, and nondestructive. It is the presenting symptom in 15% of patients.

Renal disease affects 20% to 60% of children with the condition, and the most common manifestation is microscopic hematuria with or without proteinuria. Renal disease rarely precedes the onset of rash. Children may present with nephritic or nephrotic syndrome or, rarely, renal failure. Most children with HSP who develop renal disease do so within the first 6 weeks. In longitudinal studies of unselected patients, the risk of chronic renal impairment is 5% to 15%, and the risk of end-stage renal disease is less than 1%.2 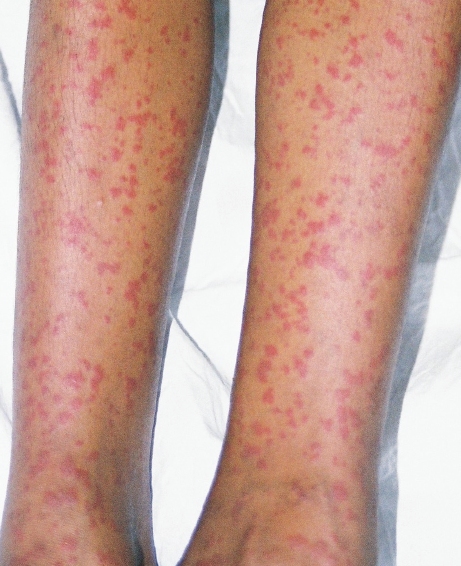 The mean duration of symptoms is 3 to 4 weeks, and up to one-third of children have at least one recurrence.

Treatment for mild HSP is supportive, with analgesics and nonsteroidal anti-inflammatory drugs.2 In severe cases, pulse methylprednisolone (30 mg/kg up to 1 g) may be used.2,4 The optimal dose and duration of corticosteroids has not been well studied. In some cases, oral corticosteroid doses of 2 mg/kg per day may be adequate; however, too short a course of corticosteroids or a rapid tapering of corticosteroids may precipitate a flare of symptoms.

Corticosteroid treatment for mild cases of HSP remains controversial.3,5,6 Corticosteroids are effective in reducing the severity of abdominal and joint pain and in treating renal disease,6 but prophylaxis with prednisone has not been shown to prevent the development of nephritis.5

In life-threatening cases or acute renal failure, plasmapheresis followed by administration of a more potent immunosuppressive agent such as cyclophosphamide, azathioprine, or cyclosporine should be considered.2