Hematemesis in an Infant

A 3-month-old boy presented to the pediatrician’s office following 2 episodes of brown emesis. The infant had been otherwise well and had been breastfeeding vigorously every 3 hours, although he had been slow to gain weight since birth. He had been passing soft yellow stools twice daily and voiding 6 or more times daily. There had been no choking or gagging during feedings.

The mother presented the baby’s bib, which was streaked with coffee-grounds-like material (A). His past medical history was significant for high-pitched inspiratory stridor in the first weeks of life, which had been diagnosed as laryngomalacia via direct laryngoscopy. 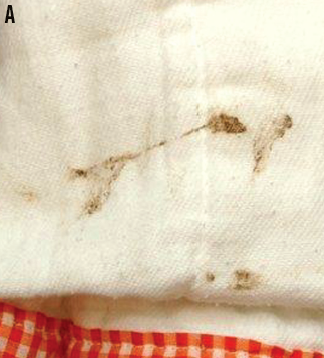 Results of an upper gastrointestinal series with airway fluoroscopy were normal.

Physical examination revealed a thin but vigorous, smiling infant. His length was 59 cm (5th percentile), weight was 5.04 kg (2nd percentile), and head circumference was 40.4 cm (25th percentile). Examination findings were otherwise unremarkable; his vital signs were normal for age, he was well hydrated, and there was no stridor or drooling. The oropharynx was normal, and there was no bruising, pallor, cutaneous hemangioma, or hepatosplenomegaly.

The results of laboratory studies, including a complete blood count, a comprehensive metabolic panel, and a coagulation profile, were within normal limits. A stool sample tested negative for the presence of occult blood.

The differential diagnosis of hematemesis in an infant includes upper gastrointestinal bleeding, most commonly from esophagitis or gastritis; swallowed blood from the nasopharynx or respiratory tract; swallowed maternal blood, which is the most common etiology in newborns; a coagulopathy such as vitamin K deficiency, platelet disorders, or clotting factor deficiencies; and the ingestion of substances other than blood, such as red food colorings and dyes.1

Among the less common causes of infant hematemesis are ulcerating gastric tumor, Dieulafoy vascular malformation, and hereditary hemorrhagic telangiectasia. Medications also can result in hematemesis by causing pill esophagitis, gastritis, and gastric ulcers and should be considered in older children based on history findings.

(For the cause of this infant's hematemesis, visit the next page)

High on the differential diagnosis for this 3-month-old boy was an upper GI bleed secondary to esophagitis. However, further history revealed that the mother had noted bright pink breast milk from the left breast (B). The pink breast milk tested positive for blood. The mother denied any history of cracked nipples or breast infections, and she had assumed that the breast milk was pink as a result of her recent use of amoxicillin for the treatment of bronchitis.

Swallowed maternal blood commonly is included on the differential diagnosis of hematemesis in newborns, but it is less often considered outside of the newborn period.2 When maternal blood is suspected, the Apt-Downey test can be used to rule out the infant as the source of bleeding.3 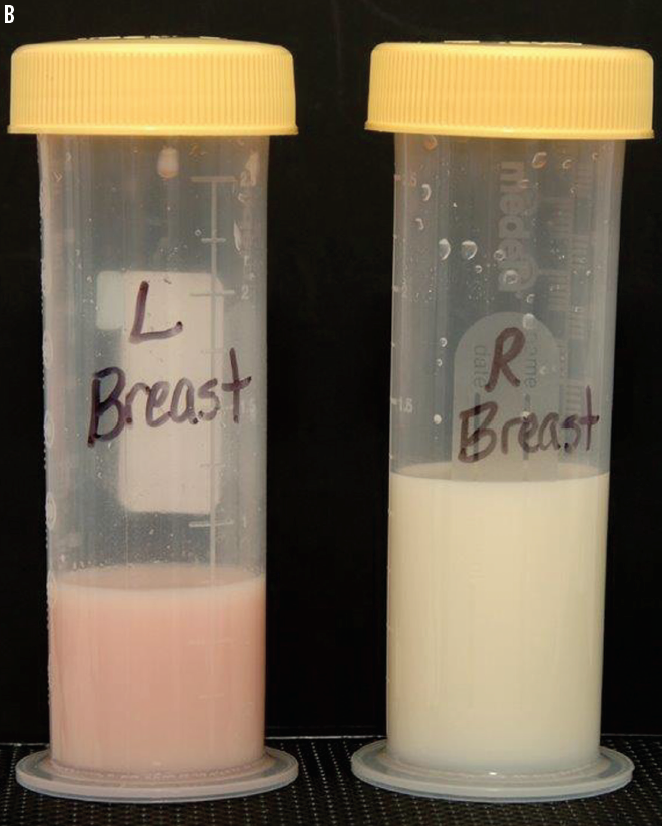 Sources of swallowed maternal blood include the following3:

Bloody nipple discharge in women after the first few weeks of breastfeeding is uncommon, and other breast pathologies must be considered. Fibrocystic breast disease has been reported as a rare cause of swallowed maternal blood occurring past the newborn period.4 A history of breast pain, infections, and changes in breast milk can help identify a maternal cause of hematemesis in a breastfeeding infant.

This infant’s hematemesis resolved with cessation of breastfeeding on the affected side, and the mother was referred for further evaluation of the cause of her bloody breast milk.