Hemangioma With Ulceration in an Unusual Location

An 11-week-old girl was brought to our emergency department (ED) for a lesion in her left armpit that her parents had noted earlier that day. The parents also noted some green discharge from the lesion. They had not noticed any preceding rash or lesion in the area. In hindsight, they felt that the infant had seemed uncomfortable when that arm had been handled and that she had been moving it less over the past 1 or 2 days. She did not have fever, and she continued to feed well and appeared well. 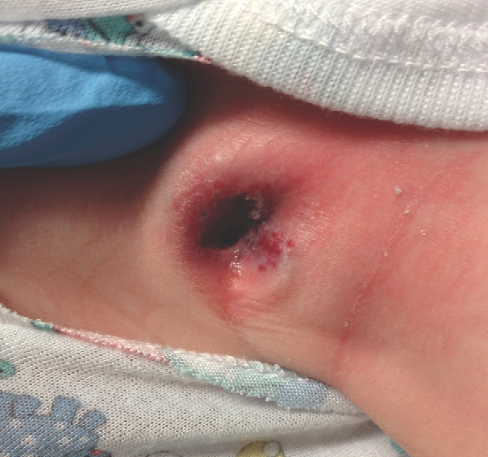 The girl had been born full-term. The mother’s prenatal laboratory test results were unremarkable. The infant had had adequate weight gain since birth. She had not received her 2-month vaccinations due to the parents’ medical insurance issues. The parents were young and were living separately with their own respective parents. The father reported a history of methicillin-resistant Staphylococcus aureus infection. There are no smokers in the family.

In the ED, the patient was afebrile and well appearing. On physical examination, she had an irregular, ulcerated, well-defined lesion about 1 cm wide, located deep in the left axilla. There was some greenish discharge, which later became bloody, and minimal surrounding erythema. The initial impression was that it was an infected wound, possibly secondary to intertrigo. Some concern existed about inflicted injury. No other skin lesions were present, except for mild scaling between the eyebrows.

The white blood cell count was 17,900/µL, and the C-reactive protein level was less than 0.3 mg/L. A blood culture and wound swab for culture were sent. She was admitted, and intravenous clindamycin was started.

On careful examination the next day, the lesion’s margins appeared well demarcated, with minimal surrounding erythema. There was no induration or fluctuance. There was some white and bloody discharge. The lesion was tender as judged by the infant’s discomfort. Small, 1-mm, hemangiomatous papules were noted at the periphery of the ulcerative lesion (A). She remained afebrile and well appearing and was feeding well.

The results of Gram-stain testing of the wound showed Gram-positive cocci. It was suspected that the lesion may have been an ulcerated hemangioma, and a dermatology consult was planned. Topical mupirocin was added. On the second day of admission, the wound culture grew Gram-negative rods in addition to rare staphylococci; intravenous cefotaxime was added while awaiting further evaluation. The lesion appeared unchanged (B). She was transferred to the local children’s hospital for dermatology evaluation. The final wound culture grew rare coagulase-negative staphylococci and rare Klebsiella pneumoniae. The blood culture showed no growth. 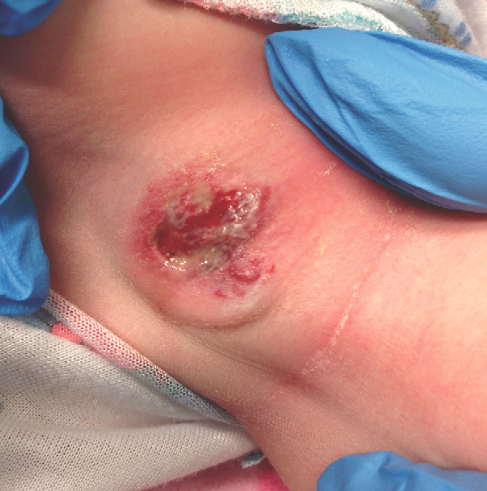 The girl was seen by dermatology, and the diagnosis of hemangioma with ulceration was confirmed. Antibiotics were discontinued, since infection appeared unlikely. Therapy with oral propranolol was started with inpatient monitoring. She tolerated the therapy well and was discharged home on oral propranolol. On follow-up at 6 weeks, the ulceration was healing well.

This hemangioma was unusual in that it was in a location that often may be overlooked on examination. It presented as an ulceration without the known presence of hemangioma. The physical evidence for an underlying hemangioma was visible only on careful examination, making it important to considered among the differential diagnoses.

Deepak M. Kamat, MD, PhD—Series Editor:Dr Kamat is professor of pediatrics at Wayne State University in Detroit. He is also director of the Institute of Medical Education and vice chair of education at Children’s Hospital of Michigan, both in Detroit.