Mr. D is evaluated in the ED. He is very ill-appearing and requires oxygen by face mask. He is febrile, with a temperature of 39.2 degrees C (102.6 degrees F); tachycardic, with an irregular heart rate of 115-120 beats per minute; and hypotensive, with a blood pressure of 100/58 mm Hg. The patient is placed on a cardiac monitor and is found to be in atrial fibrillation. A chest x-ray reveals a large infiltrate in his left lung. He has an elevated white blood cell count of 15,500/µL, consistent with a clinical diagnosis of pneumonia. Mr. D is given intravenous hydration, blood is drawn for cultures, and he is admitted to the Cardiac Telemetry Unit for monitoring of his arrhythmia. Intravenous ceftriaxone 1 g daily is started for pneumonia, and metoprolol 50 mg by mouth twice daily is given for tachycardia.

Mr. D spends a quiet night following admission, and the next day he is no longer short of breath. He remains febrile, but his heart rate and blood pressure are now in the normal range. The patient tells the nursing staff that he wants to go outside for a few minutes to smoke a cigarette. The nurse spends time with Mr. D in his hospital room asking about his smoking history and finds out that he has been smoking two packs of cigarettes per day since the age of 17. Mr. D reports that he has tried to quit smoking more than 20 times, often at the urging of his wife. He reports that he never received any formal advice or assistance from his doctor but was told many times that he should stop smoking. He tried using nicotine gum and patches in the past but was never able to stop smoking for more than seven days. His wife stopped allowing him to smoke in their house five years ago, so Mr. D goes outside and smokes with his neighbors. The patient becomes more insistent about leaving the Telemetry Unit to smoke. His nurse tells him that she will ask the doctor to prescribe some nicotine replacement therapy for him and asks if she can call his wife. Mr. D agrees to wait for his wife and the doctor but appears restless and reports that he knows he will feel better if he can have “just one cigarette.”

The nurse pages the doctor on call and explains the situation. She asks the physician to speak with Mr. D, given his lengthy smoking history. While she is on the telephone, Mrs. D arrives. She begs the nurse for help, stating that her husband was told more than ten years ago that he suffers from smoking-related lung disease and that his coughing has been chronic for more than five years. Mrs. D is hoping that, while her husband is in the hospital, something can be prescribed to help with his cravings for cigarettes.

The Centers for Disease Control and Prevention (CDC) recently estimated that approximately one in ten older adults is a current smoker, accounting for more than 40% of adults who smoke.1 Of those who are over the age of 65 years, 4.5 million smoke cigarettes daily. Older men are five times more likely to be active smokers in late life as compared to women.1 Quitting smoking at an older age can still yield substantial health benefits.1,2 Older smokers can still benefit from a reduction in coronary artery disease, lung cancer, chronic obstructive pulmonary disease, and improvement in osteoporosis if they stop smoking.3 Those who suffer from chronic illnesses such as cardiac and lung disease will have fewer exacerbations related to smoking and will recover at a faster rate following smoking cessation. Longevity estimates from one study suggested that male smokers age 65 years and older who quit gain 1.4-2.0 years of life as compared to those who do not quit.3 The vast majority of smokers who attempt to quit each year do so without the benefit of either behavioral or pharmacologic treatments.4-7 This is unfortunate, as even brief behavioral counseling and the support of a healthcare provider can double the success of smoking cessation1,7 (Table I). 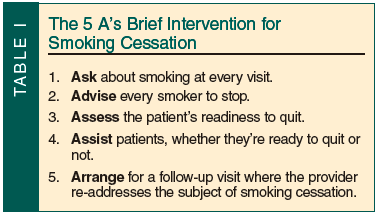 Older hospitalized patients are far less likely than younger inpatients to receive smoking cessation counseling or interventions.2,5 Prior research has demonstrated that older adults who are smokers and are hospitalized for acute myocardial infarction are significantly less likely to receive smoking cessation interventions as compared to those under the age of 65 who are smokers and have an acute coronary event.8 Other research suggests that physicians are less aggressive when counseling older as compared to younger smokers about smoking cessation benefits and treatments.1,7 The Centers for Medicare & Medicaid Services (CMS) has estimated that 10% of its total annual budget is devoted to treating smoking-related illnesses.1 In 2005, CMS made the decision to provide coverage for smoking cessation counseling for Medicare beneficiaries who have smoking-related illnesses or who are taking medications that are affected by tobacco use. The Medicare Prescription Drug Benefit (Medicare Part D) now covers many physician-prescribed smoking cessation treatments.1 There is substantial evidence that brief interventions given by healthcare providers can significantly increase smoking cessation rates from 8% to 30% at one year if used in combination with medications and ongoing support.1,8 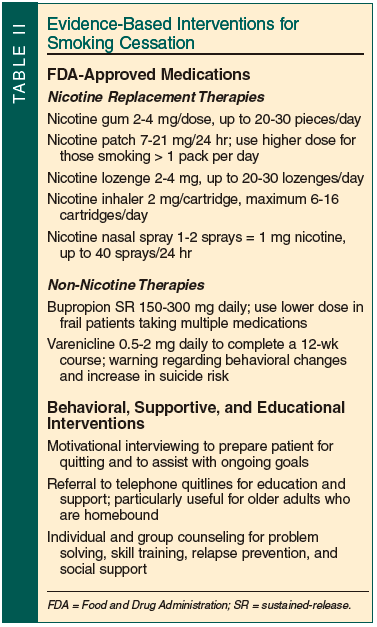 Nicotine replacement therapies have been one of the key aspects of smoking cessation programs.1,5,7 Use of these products can double the success rate for abstinence at one year.1,8 Use of other agents including bupropion and varenicline is also beneficial, and these medications may be combined with nicotine replacement products. By far, the best success rates occur when psychosocial interventions are combined with medication therapies1,8-10 (Table II). The use of smoker quitlines that provide telephone support and reminder calls has offered a significant advantage to many older adults, as they may not be as able to leave the home to attend counseling.1 It is vital that the clinician continue to provide support, education, and encouragement at every visit.2,5

The concept of health literacy is an important factor in the care of older smokers.1 Health literacy has been defined as the degree to which individuals have the capacity to obtain, process, and understand basic health information and services.11 This has been linked to educational status and reading ability. Of more practical value is the concept of functional health literacy, which indicates the ability to read and comprehend the instructions for the use of nicotine replacement therapies and behavioral interventions.11,12 While men such as Mr. D may have the educational and reading skills needed for health literacy, they often have never taken an active role in their healthcare.12 An important aspect for the clinician to appreciate is the need to provide brief interventions and motivational support at every visit in order to help older men become more active participants in their smoking cessation plans.10

Relapse is common and should be anticipated by the clinician.1 It is important to discuss the possibility of relapse with the patient and to help prepare a plan to resume smoking cessation again. This may require enhancement of the treatment plan, such as the addition of another medication, use of individual or group counseling, or multiple interventions.1,7,8 It is vital that the clinician maintain ongoing contact with the patient to discuss relapse and the ability to continue with smoking cessation efforts in a positive manner.5

Mr. D became increasingly restless, insisting that he had to smoke and stating that he wanted to be discharged from the hospital. Mrs. D was very upset, reporting that her husband would rather die than stop smoking. The patient’s primary care physician came to see him and was able to convince him to remain in the hospital with the promise that he would be given medications for his cravings. Mr. D did not like nicotine gum, so the physician prescribed nicotine lozenges 2 mg every 2 hours as needed and instructed Mr. D to suck on them slowly. In addition, the physician also started Mr. D on a 14-mg-per-hour nicotine patch to help with ongoing nicotine replacement, given his years of heavy smoking. The patient was shown how to access the hospital’s educational system that included a 24-hour smoking cessation television channel with advice, supportive information, and skills for becoming a nonsmoker. Both Mr. and Mrs. D were given the phone number of the local Smoker’s Quitline that also provided access to free nicotine patches.

Mr. D completed his course of treatment for pneumonia and atrial fibrillation and was discharged home. He was offered a trial of bupropion but refused, stating that he felt the lozenges and patches were enough. Mr. D suffered several brief relapses but called the Quitline asking for help. He was referred to a local senior center that offered group sessions for smoking cessation. At a three-month follow-up visit, the patient had not smoked in eight weeks and was using the lower-strength 7-mg nicotine patch along with nicotine lozenges. He practiced deep-breathing techniques to help with cravings and learned to avoid sitting near people who were smoking. Mr. D was pleased that he no longer felt short of breath, and his coughing was minimal. His physician provided ongoing encouragement and explained that Mr. D would continue to feel better as a nonsmoker. Mr. D also started talking to his former smoking buddies about quitting, stating that if he could stop after 50 years of smoking, anyone can.

9. Apodaca TR, Longabaugh R. Mechanisms of change in motivational interviewing: A review and preliminary evaluation of the evidence. Addiction 2009;104(5):705-715.