Deepak M. Kamat, MD, PhD––Series Editor: Dr Kamat is professor of pediatrics at Wayne State University in Detroit. He is also director of the Institute of Medical Education and vice chair of education at Children’s Hospital of Michigan, both in Detroit. 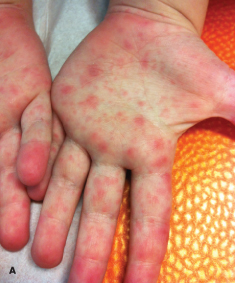 These photos are from 2 different children with hand-foot-and-mouth disease (HFMD). The 5-year-old boy presented with a macular, papulovesicular rash on the hands, feet, buttocks, and perioral area (A to D). He also had oral lesions (E). The rash was accompanied by symptoms of an upper respiratory tract infection. The 10-month-old girl had a similar rash in the perioral area (F) and on the hands (G). Her parents reported that she had increased fussiness. The children were evaluated in January 2012. Both also had fevers, with temperatures up to 39.4ºC (103ºF).

The typical cutaneous findings of this acute, self-limited viral illness consist of small vesiculopustules on the sides of fingers and toes. The hands are involved more often than the feet, and the dorsum and side of the fingers more often than the palm. The oral lesions may be few to many 3- to 5-mm ulcers scattered in the mouth, predominantly on the tongue and buccal mucosa. The buttocks are also commonly affected. The lesions are tender and vary in size from 3 to 7 mm.

HFMD usually occurs in children younger than 5 years. Classically, it is caused by coxsackievirus A16 and enterovirus 71. It has a short incubation period of 4 to 6 days and characteristically appears during summer and fall months in the United States. HFMD is moderately contagious and transmitted through contact with saliva, respiratory secretions, fluid in vesicles, and feces. 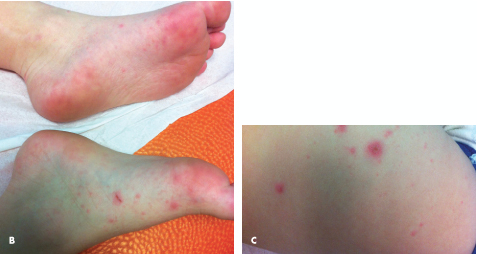 Specimens from the children shown were submitted to the CDC and were identified as coxsackievirus A6, a new variant. This virus appears to cause more severe disease, and some patients with the illness have been hospitalized. About 63% of the persons affected were younger than 2 years, 24% were 18 years or older.1 The new strain was first reported in the United States in November 2011; since then multiple cases have been reported in several states.1 These cases were identified as unusual by health care providers who contacted the CDC for diagnostic assistance. 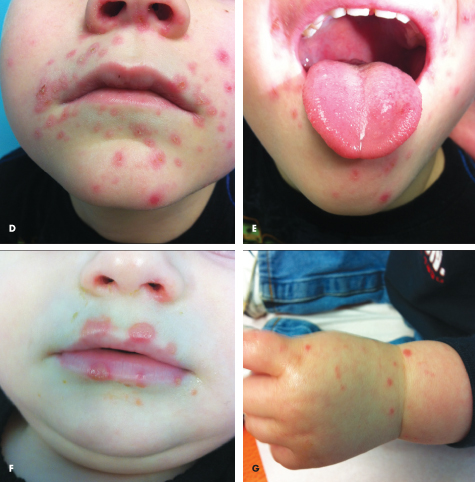 HFMD spontaneously resolves in about week, and treatment is symptomatic. It is important to advise parents of the signs of associated illnesses, including meningitis, encephalitis, and paralytic disease, which are rare components of some epidemics of HFMD. Parents and patients should be provided the following tips on how to prevent the spread of HFMD:

•Avoid close contact, such as kissing and sharing eating utensils and cups with infected persons. 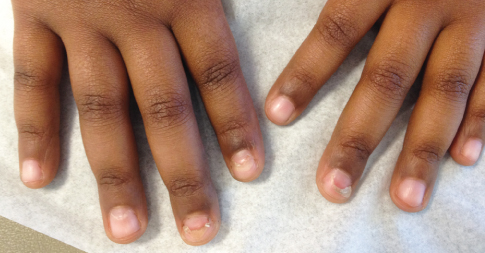 The mother of a 6-year-old girl was concerned about her daughter’s nails, which appeared to be “peeling off.” The child stated that her nails had been peeling for a while. She denied pain, fever, pruritus, trauma, and recent medication use. Two months earlier, the child had hand-foot-and-mouth disease (HFMD), which was characterized by vesicles in the oropharynx, on the palmar surfaces, and on the soles of the feet. The rash was associated with an elevated temperature and spontaneously resolved in a week.

The patient was healthy-appearing and in no apparent distress. Physical examination findings were normal except for the fingernails, all of which had proximal shedding of the nail, with an upper layer lifting up from a healthy nail underneath. Both greater toes were similarly affected. There was no erythema, edema, tenderness to palpation, discharge, or signs suggestive of a fungal infection. No hair loss or dental abnormalities were noted.

The nail dystrophies Beau lines and onychomadesis have been associated with HFMD. Beau lines are deep ridges in the nails that run from one side to the other and are caused by a slowing of nail matrix production. In contrast, onychomadesis manifests as shedding of the nail plate from the nail bed that begins proximally and progresses towards the free edge of the nail and is caused by a complete arrest of nail matrix formation.1,2

An outbreak of HFMD caused by coxsackievirus A6 in Finland in 2008 was associated with subsequent nail shedding.3 In a recent US outbreak, nail shedding occurred in 2 of 46 patients with rash variables of HFMD possibly caused by this variant.4

Onychomadesis is an uncommon and relatively benign complication of HFMD. Nail shedding is usually self-limited, and cosmetic outcomes are fairly normal. Patient and familial anxiety is easily relieved with reassurance.