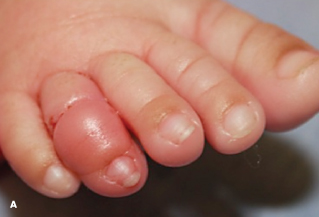 The parents of a 4-month-old boy with excessive crying brought their son to the emergency department. They had been unable to console him for the past 4 hours and had noticed a swelling of his right fourth toe. He had been otherwise healthy. His prior medical history, including birth history, was unremarkable.

The boy’s vital signs and physical examination findings were normal, except for the right fourth toe, which was significantly swollen and erythematous; capillary refill was greater than 4 seconds. Two constriction bands, one at the level of the interphalangeal joint and one at the nail cuticle, clearly demarcated normal-appearing skin from the swollen area (A).

Hair tourniquet syndrome—also known as toe tourniquet syndrome—is a rare condition that mainly occurs in children, especially young infants. It usually develops when a digit, often a toe, becomes strangulated with a fine thread or strand of hair.1,2 However, genital cases, in which the tourniquet forms around the penis,3 clitoris, or labia,4 also have been reported. Unexplained irritability and crying is the most common presentation. Most cases of hair tourniquet syndrome are incidental,
although neglect and/or abuse should be considered, especially when social circumstances appear to be suspicious.

The hair or thread may cut through the skin and be difficult to visualize because of subsequent edema caused by obstruction of venous blood flow. Delay in treatment can lead to ischemia, necrosis, and loss of digit(s).

Management of hair tourniquet syndrome requires prompt removal of the constriction band with the use of fine-tipped forceps, when the hair or thread can be visualized. Deeply embedded bands require nerve block of the affected digit for local anesthesia followed by a blind perpendicular incision of the constriction band. Early identification and treatment is important for a good prognosis. 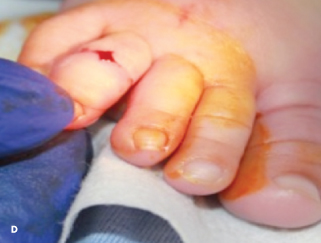 The hair tourniquet in this infant was surgically removed. The procedure is illustrated in photos B to D. The field is prepared with a povidone-iodine topical antiseptic after appropriate nerve block of the affected digit (B). A deep perpendicular incision is made at the dorsal, medial, or lateral aspect of the digit (C). Normal skin color returns after incision and removal of the tourniquet (D).