A 2-month-old girl who had been born at term and who had no past medical history presented to the emergency department (ED) with a hair tourniquet and suspected infection on her right second, third, and fourth toes. Her primary care physician had noted the finding incidentally during the girl’s well-child visit and had referred her to the ED.

Physical examination findings were notable for tenderness, edema, erythema, and bleeding from her right third toe. An orthopedic surgeon was consulted to evaluate the neurovascular status of the toe and to perform complete removal of the tourniquet. The patient was treated with an over-the-counter depilatory (Nair) and had a few remaining loops of hair removed with micro-forceps; this was followed with application of topical bacitracin. The girl was admitted and monitored overnight. 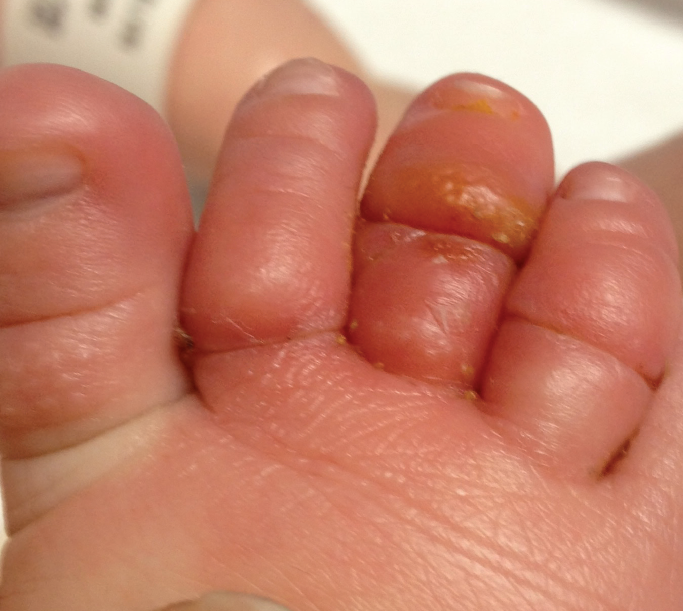 Physical examination findings following the procedure were notable for a third toe with purplish color, 2+ distal pedal pulse, and brisk capillary refill in all toes (photo). The social work department and the child protection team were consulted, and a report to child protective services (CPS) was made due to concerns about the parents’ delay in seeking care.

During the hospitalization, the girl was noticed to have resolving edema, no tenderness to palpation of any of the affected toes, and full passive and active range of motion. CPS and the social work department determined that the girl could be discharged with her parents. A follow-up appointment with her pediatrician was made at the time of discharge.

Hair tourniquet syndrome must be considered in the differential diagnosis of the fussy infant.1,2 The condition most often affects children from 4 days to approximately 6 years of age.1,3 The toes, primarily the second and third digits, are most commonly affected.1,4 Fingers and genitalia also can be affected.1,4

One hypothesis to explain this phenomenon proposes that a child’s digital movements within a confined area, such as a mitten or a sock, cause the hair fiber to wrap around the affected area.5 The mechanism of injury begins with impedance of lymphatic return of the digit, followed by obstruction of venous outflow and subsequent arterial constriction.1,2,4 Ischemic injury, necrosis, and auto-amputation may result if the hair is not removed promptly.1,6 In addition, child abuse must be ruled out as the cause.6,7

Inspection can be difficult, because the hair may be so deeply embedded that it escapes detection.5,6 Hair tourniquets may be removed with over-the-counter depilatories and forceps, but surgical evaluation and exploration may be needed if there is uncertainty that all hair fibers have been removed.4