An otherwise healthy 3-year-old girl was brought for evaluation of fever, sore throat, and shaking chills of 12 hours' duration. She had beefy-red, posterior oropharyngeal erythema and a scarlatiniform rash on her shoulder that had been present for a few hours. The rash faded out over her chest but reappeared in the perineum and lower abdomen. She also had vulvovaginal inflammation with surrounding erythema. The mother was surprised to see the inflammation, but in retrospect added that the child had complained of vaginal discomfort as well. A rapid antigen test for group A b-hemolytic streptococci (GABHS) from a swab of the oropharynx was positive.

Vulvovaginitis is the most common gynecological complaint of prepubertal girls.1,2 Causative bacterial organisms include GABHS, Staphylococcus aureus, Haemophilus influenzae, Klebsiella pneumoniae, and Shigella flexneri. Many other bacteria have been isolated that are not felt to be pathogenic at this site. Much less commonly, nonbacterial infections (mycotic, protozoal) or even pinworm infestation may be the cause of vulvovaginitis. 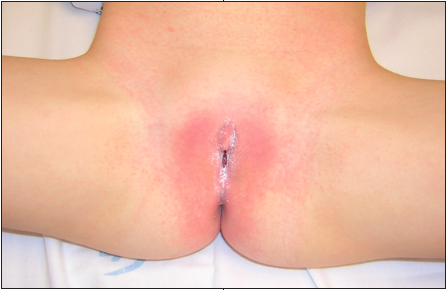 GABHS represents 10% to 20% of all cases of prepubertal vulvovaginitis.1,2 For unclear reasons, young girls aged 3 to 10 years are the most commonly affected.Presenting complaints include regional erythema, discomfort, dysuria, and vulvar discharge and (less commonly) bleeding.1,2 In some cases, a scarlatiniform rash may spread beyond the perineum--as in this patient.

Standard culture is the best way to make a definitive diagnosis. In one study, rapid group A streptococcal antigen screening from a vaginal swab effectively identified the causal organism.3 However, labs may refuse to run this rapid screening test because its sensitivity and specificity are unknown for this anatomical site, and the testing of vaginal discharge does not fall within the manufacturer's guidelines. In many cases, concomitant GABHS pharyngitis can allow presumptive diagnosis without vaginal swabbing.1 Concomitant GABHS proctitis with GABHS pharyngitis has also been reported; however, this is less common.4

Treatment with a 10-day course of oral antibiotics effective against GABHS is indicated.1,5,6 This patient was treated with a 10-day course of oral cephalexin. The literature related to complications of GABHS vulvovaginitis is very limited. Currently, the risk of serious complications, such as necrotizing fasciitis, rheumatic fever, toxic shock, and glomerulonephritis, must be assumed to be similar to that associated with infection of other body sites. *