A 6-year-old boy presented to the clinic with his mother for a yearly physical examination. The boy had no significant past medical history, but his mother noted that the child was excessively physically active and consumed approximately 1 gallon of water per day, which was linked with polydipsia and polyuria. Additionally, the patient had an intense craving for bananas and consumed 6 bananas per day. His appetite for other foods had decreased, and ensuring consumption of home-cooked meals was difficult.

His mother denied seeing a tremor or increased perspiration in the boy, and she said there were no recent changes in his bowel habits. He did not experience insomnia or heat intolerance. However, the boy had loose stools when his consumption of bananas decreased to 2 or fewer per day. 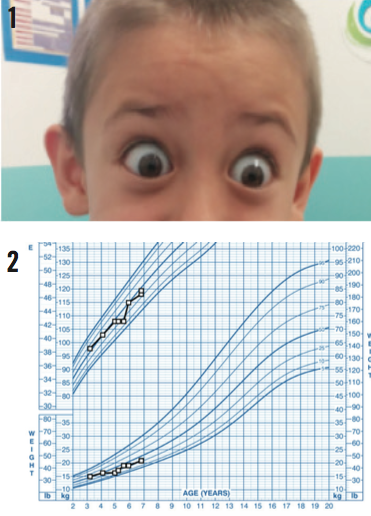 Sample quantity was insufficient to determine anti-TG and anti-TPO. The patient was referred to an endocrinologist, and his mother was educated on signs, symptoms, complications, and management of hyperthyroidism. The boy was started on methimazole 5 mg tablets, twice daily, for 1 month, and a supplemental nutritional drink to ensure weight gain.

Follow-up after 1 month of treatment revealed resolution of polydipsia and polyuria. Additionally, the boy’s banana consumption had decreased to 1 per day due to the resolution of diarrhea. Physical examination results showed that the patient was less hyperactive, his exophthalmos had decreased (Figure 3), and his heart rate had normalized. His mother was again educated on hyperthyroidism and the importance of follow-ups.

A hyperthyroid profile was repeated, and a radioiodine uptake (RAIU) test was ordered, although the patient did not follow up with the RAIU test. The results of the repeated profile revealed normalized FT4 (1.1 ng/dL), low TSH (0.008 mIU/L), elevated TSI (4130%), and elevated anti-TPO (120 IU/mL). Thyroid ultrasonography results revealed a slightly enlarged right thyroid with multiple hypoechoic foci, possibly representing colloid cysts. The boy was diagnosed as having Graves disease.

The most common cause of hyperthyroidism in children and adolescents is Graves disease. The incidence of Graves disease among children is 1 in 5000, with most occurrences among individuals aged 11 to 15 years. Graves disease affects girls more often than boys.1 However, as with most autoimmune disorders, the exact etiology of Graves disease is unknown. It is theorized that genetics and heredity play a role in an individual’s susceptibility to the disease.

The overall increased metabolic rate that accompanies Graves disease leads to a myriad of clinical manifestations. Some of the common signs and symptoms seen in Graves disease include fatigue, weakness, hyperactivity, restlessness, weight loss despite increased appetite, heat intolerance, insomnia, polydipsia, polyuria, and increased bowel motility and frequency.1,2 Physical examination results can show a thyroid goiter, tachycardia, pretibial myxedema, hyperreflexia, thyroid bruits, muscle weakness, tremors, sweating, and proptosis. Our patient was a boy who had unremarkable bowel movement due to his increased intake of bananas, which masked the diarrheal symptoms often present in Graves disease.

Other differentials for hyperthyroidism are toxic thyroid adenomas and toxic multinodular goiters (TMG).5 Both TMG and toxic adenomas are the result of focal hyperplasia of thyroid follicular cells and increased thyroid hormone production, independent of TSH. Activating mutations of the TSHR result in continued production of thyroid hormones, indefinitely leading to hyperthyroidism.6 TMG is characterized by patchy regions of thyroid hyperfunction, differentiating it from Graves disease, which demonstrates diffuse hyperfunction. Regions of hypofunction in TMG are also present, resulting in patchy glandular atrophy.7 TMG is often seen in areas of low iodine intake.8

A potential, life-threatening complication of hyperthyroidism is a thyroid storm. It manifests as an acute exacerbation of thyrotoxicosis precipitated by infections, diabetic ketoacidosis, or stress such as trauma, injury, illness, or childbirth. Thyroid storms incorporate distinguishing factors that include marked fever, tachycardia, agitation, confusion, and possible psychosis. Gastrointestinal symptoms such as nausea, vomiting, and diarrhea are also seen. The mortality rate of thyroid storms is more than 10%; they require expeditious treatment and monitoring.11

The diagnosis of hyperthyroidism is often apparent from the patient’s history and physical examination results. Thyroid function tests are used to confirm the presence of hyperthyroidism, which is characterized by an elevated FT4 and T3, and a suppressed TSH. However, additional testing must be conducted in order to further understand the etiology of hyperthyroidism. Elevated TSHR-Ab levels are closely associated with the presence and pathogenesis of Graves disease. Hashitoxicosis is ruled out by the absence of TG-Ab and TPO-Ab.12 In the case of elevations in both TSH and thyroid hormones, further testing would include brain magnetic resonance imaging to determine the presence of a pituitary adenoma.

To rule out other causes of hyperthyroidism, such as TMG, de Quervain thyroiditis, and subacute lymphocytic thyroiditis, a radioactive iodine uptake scan may be ordered. In both Graves disease and TMG, increased uptake of radioactive iodine is seen, denoting hyperfunction. A patchy uptake scan signifies TMG, which demonstrates localized hyperfunctional regions, whereas a diffuse uptake signifies Graves disease.7 In both conditions, TSH is suppressed while thyroid hormone levels are elevated. However, in de Quervain thyroiditis and subacute lymphocytic thyroiditis, decreased uptake of radioactive iodine uptake is seen. This is primarily due to damaged thyroid follicular cells and inability to trap iodine.

Treatment options for hyperthyroidism are divided into 3 main modalities: pharmacologic therapy, radioiodine ablation therapy, and surgery.8 Lifelong monitoring of thyroid function is important and is indicated in any patient with a history of hyperthyroidism.

Pharmacologic treatments include thionamides such as methimazole and propylthiouracil (PTU).13 These treatments are based on the inhibition of thyroid hormone synthesis via blockage of TPO. PTU also inhibits the peripheral conversion of T4 to T3. Methimazole is the preferred treatment due to longer duration of action and rapid effectiveness, but PTU is preferred in pregnancy.14 In the treatment of Graves disease in children, methimazole is the drug of choice, with other drugs, such as β-blockers, that may be added for adrenergic overactivity.15

Initial dosing of methimazole is between 0.25 and 1.0 mg/kg/d, depending on the goiter size and clinical severity. Patients with a higher clinical severity are dosed on the higher end of the range. Remission occurs in one-quarter of children using thionamides for 2 years and half of children in 4.5 years.

Relapses may occur, most often within 1 year of treatment. Minor side effects of thionamides include rash, hives, arthralgia, and gastrointestinal symptoms. Major side effects include hepatitis, agranulocytosis, vasculitis, and teratogenicity. Although agranulocytosis is a potential adverse effect, routine WBC count is not recommended due to the rarity of agranulocytosis and its sudden onset. However, febrile illness or pharyngitis warrants immediate termination of antithyroid medication and WBC measurement.13

In the event of an acute exacerbation of thyrotoxicosis and progression to a thyroid storm, patients should receive supportive care with cooling blankets, intravenous fluids, and glucose; PTU; iodine; β-blockers; and dexamethasone.11 PTU followed by iodine is used to inhibit thyroid hormone synthesis, and β-blockers are used to control heart rate. Dexamethasone is given to prevent T3 generation from T4 and to provide adrenal support.13

Radioiodine ablation therapy is the most common therapy for Graves disease in the United States. It institutes destruction of thyroid follicular cells, thereby resolving hyperthyroidism. In contrast to thionamide treatment, which is employed in patients with significant symptoms, underlying heart disease, or advanced age, radioiodine ablation therapy may be used in patients who have well-tolerated hyperthyroidism and no need for pretreatment with thionamides. Side effects of radioiodine therapy are permanent hypothyroidism, worsening of Graves ophthalmopathy, and rarely, radiation thyroiditis.14

Surgery is often advised for patients with severe hyperthyroidism and a large goiter that causes respiratory and feeding issues, in addition to patients with allergies to thionamides and contraindications to radioiodine ablation therapy.

However, the potential side effects of surgery make it an unpopular choice for patients with Graves disease. Similar to radioiodine ablation therapy, surgery for patients with Graves disease is linked with permanent hypothyroidism. Other possible side effects of surgery include recurrent laryngeal nerve palsy, recurrence of hyperthyroidism, and permanent hypoparathyroidism.16 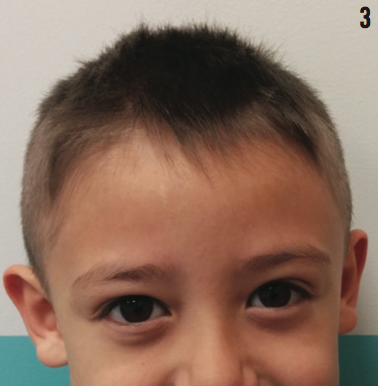 It is imperative to diagnose and treat hyperthyroidism as early as possible to avoid the possibility of life-threatening symptoms, such as fever, tachycardia, and psychosis. In the case of our patient, hyperactivity and excessive consumption of bananas were noted by his mother, alerting the clinicians to further investigate. The potassium from the bananas masked the diarrhea that may be seen in hyperthyroidism, which was evident when the consumption of bananas was decreased. However, a thorough investigation and appropriate laboratory tests yielded the correct diagnosis. As physicians, we must be diligent in identifying hyperthyroidism and knowledgeable in its disease course and treatment.

Nida Blankas-Hernaez, MD, FAAP, is an associate professor in the Department of Pediatrics at Lutheran General Hospital in Park Ridge, Illinois.