A 38-year-old woman was admitted to our hospital after an incidental finding of hypokalemia on routine screening. Her medical history was not significant. On review of symptoms, she reported generalized pain, fatigue, weakness, polyuria, and nocturia. She was not taking any medications except for acetaminophen as needed for body aches. She denied nausea, vomiting, diarrhea, diuretic abuse, and a family history of kidney disease or cancer. She ate a regular diet and had no history of the use of alcohol or illicit drugs.

Physical examination. Her blood pressure was 115/70 mm Hg and her pulse rate was 82 beats/min. There was no focal neurologic deficit or weakness in any part of the body.

Diagnostic tests. An electrocardiogram (ECG) showed normal sinus rhythm and biphasic T waves in the precordial leads, a finding suggestive of hypokalemia (Figure). Marked hypokalemia (potassium, 2.5 mEq/L; reference range, 3.6-5.2 mEq/L) with an elevated bicarbonate level (38 mEq/L; reference range, 23-32 mEq/L) was the most striking initial biochemical abnormality. Further investigations were performed to explore the cause of the patient’s hypokalemia with elevated bicarbonate level, the results of which are summarized in the accompanying Table. 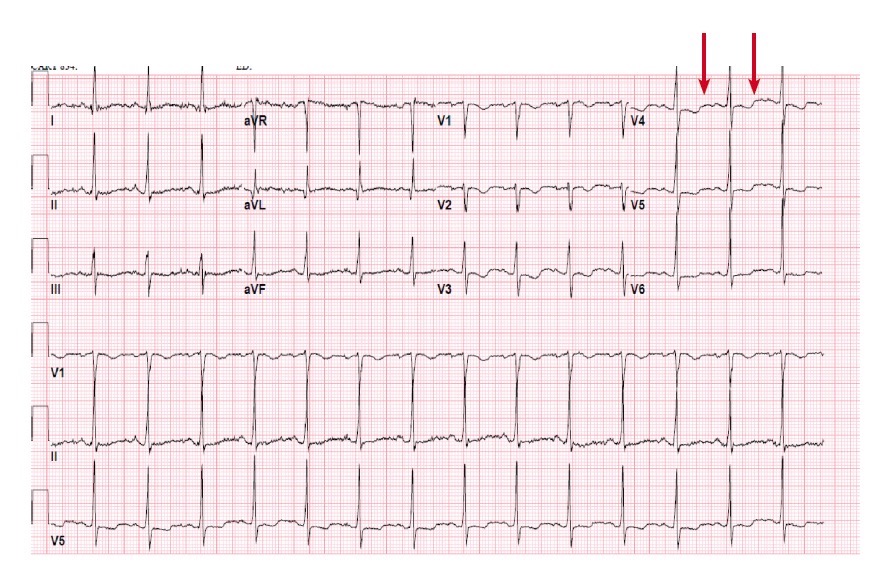 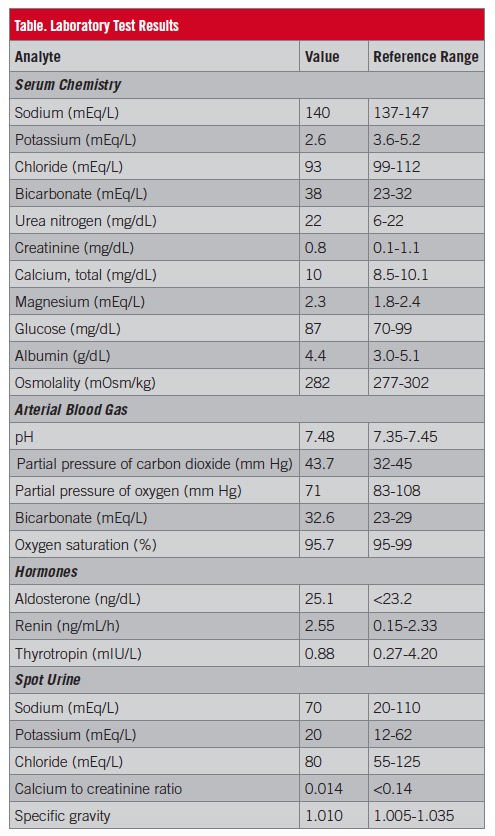 Based on the history, physical examination findings, and laboratory test results, surreptitious vomiting and diuretic abuse were ruled out, given that the urine chloride concentration was more than 40 mEq/L and that there was no day-to-day variability in the urine chloride concentration. After excluding surreptitious vomiting and diuretic abuse, the differential diagnosis for the findings of normal blood pressure, hypokalemia, and metabolic alkalosis was narrowed to either Gitelman syndrome (GS) or Bartter syndrome. The ratio of urine calcium to creatinine was less than 0.04, which favors the diagnosis of GS.

Outcome of the case. The ECG abnormalities resolved with potassium replacement. The patient was discharged home with potassium supplementation. Repeated outpatient laboratory tests revealed the serum potassium to be in the low-normal range, after which spironolactone therapy was considered. The patient refused genetic testing, and as such, a definitive diagnosis was not possible.

Discussion. Hypokalemia is common and results predominantly from increased gastrointestinal tract or urinary tract losses, but it also can result from transcellular shift or decreased intake. Increased secretion of potassium in the distal nephron is most commonly seen with diuretics or mineralocorticoid excess but also can be caused by rare tubulopathies such as Bartter syndrome, GS, and Liddle syndrome.

GS, also called tubular hypomagnesemia-hypokalemia with hypocalciuria, is a rare autosomal recessive disorder with characteristic features of hypokalemia, metabolic alkalosis, hypomagnesemia, hypocalciuria, hyperreninemia, hyperplasia of the juxtaglomerular apparatus, and secondary hyperaldosteronism.1,7 This renal syndrome results from mutations in SLC12A3, the gene coding for the thiazide-sensitive Na+-Cl− cotransporter (NCCT) in the distal tubule.2,3 The most common mutation causes impaired cellular routing of the cotransporter.8

Although its presentation in infancy has been described, GS usually is diagnosed in late childhood or adulthood. The intensity of clinical manifestation may vary, or the condition may be asymptomatic. The most-reported signs and symptoms include body cramps, fatigue, chondrocalcinosis, tetany, paralysis, rhabdomyolysis, and, rarely, growth retardation.2,4,5 Polyuria and nocturia are found in approximately 50% and 80% of affected patients, respectively. The polyuria likely is related to salt and water loss secondary to nephrogenic diabetes insipidus. The genetic defect should not affect concentrating ability, because function in the medullary thick ascending limb is relatively intact. However, chronic hypokalemia is a cause of nephrogenic diabetes insipidus.

Normomagnesemia occurs in 20% to 40% of patients with GS.6 A low serum magnesium level may indicate the severity of the condition.6 Clinical manifestations, electrolyte abnormalities, metabolic alkalosis, and renin-angiotensin-aldosterone system activation have been found to be milder in normomagnesemic patients compared with hypomagnesemic patients.6

Once vomiting, diuretic abuse, and laxative abuse have been excluded from the differential diagnosis of a normotensive patient presenting with hypokalemia, rare conditions such as renal tubular acidosis, Bartter syndrome, and GS must be considered. The diagnosis of GS is largely one of exclusion, made in patients who present with unexplained hypokalemia and metabolic alkalosis with a normal or low blood pressure, and in whom other more common etiologies have been ruled out. In patients thought to have either Bartter syndrome or GS, measurement of urinary calcium excretion can help differentiate between these disorders. GS is associated with hypocalciuria, whereas Bartter syndrome is associated with hypercalciuria.9,10

Potassium and magnesium supplements and potassium-rich diets are commonly used in the management of GS. However, nonsteroidal anti-inflammatory drugs, potassium-sparing diuretics, and angiotensin-converting enzyme inhibitors and angiotensin receptor blockers can also be used, either alone or in combination.11